More of that Martin

A few more of the Crag Martin from Sunday. 'A very hard bird to photograph' was the general consensus - I have to say I didn't find it particularly hard to get a photograph, especially at the football ground when it was generally further away and less directly overhead than when at the church - but it was certainly very hard to get a good photograph! And just as hard to follow with bins as with the camera. Sometimes it was better just to watch it with the naked eye and marvel at the switchbacks and handbrake turns it was performing in pursuit of flying insects. 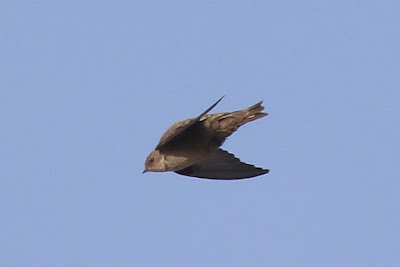 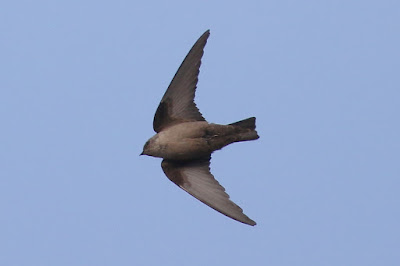 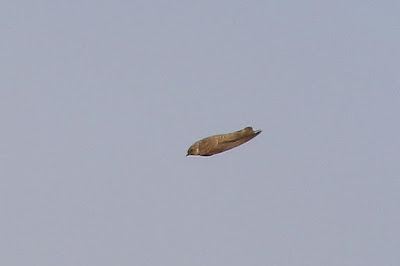 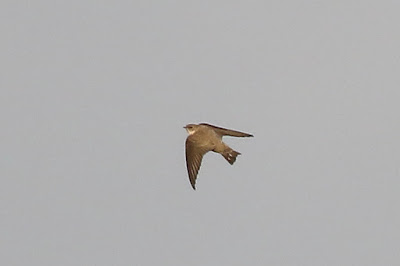 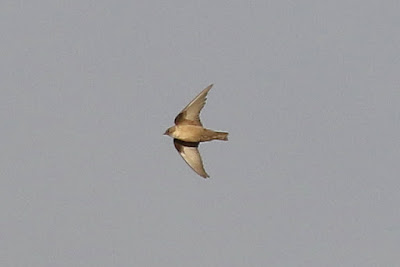 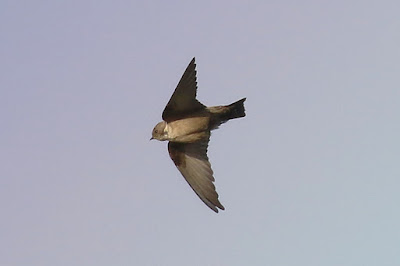 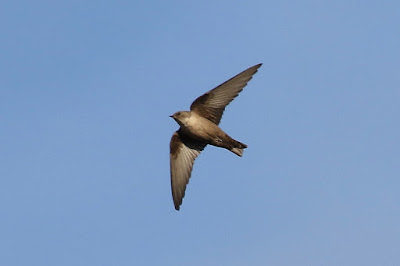 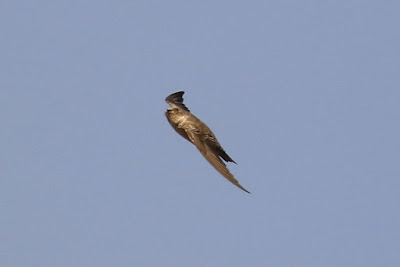 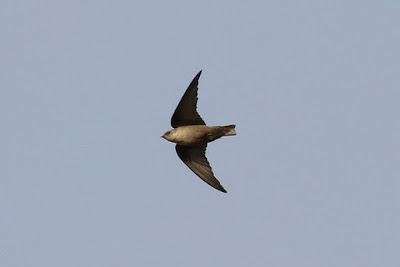 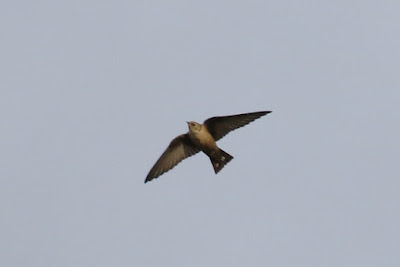 My friend Michael twitches football grounds, much as I twitch birds, only with a higher chance of them being there when he arrives. I think a game has to be played for the ground to be tickable, so I guess there is some jeopardy involved if he travels to a match to find the pitch waterlogged or snowbound. But rarely does he arrive to find it gone, or dead, at least. So, fancying a change, I thought I'd give football ground listing a go - and where better to start than the Proact Stadium, home of Chesterfield FC, aka 'The Spireites' - so named for the Town's famous leaning church tower.﻿

OK, I admit it, I wasn't there for the glamour of the League One side's shiny stands, but for what had spent the night, and possibly quite a lot of the previous week, inside them: a Crag Martin. This extremely rare visitor - less than 10 records for Britain - had been appearing at the Church of the crooked spire sporadically over the previous week, but was spending long periods away from it at an undiscovered location. It took what was presumably a sharp eyed Chesterfield fan, watching their team go 1-2 down to Oldham yesterday afternoon, to stumble upon its alternative haunt.
When the bird was reported roosting in the East Stand shortly after the final whistle on Saturday, this seemed to dramatically improve the chances of success of seeing it well for anyone visiting on Sunday. Steve Smith and I saw the bird so poorly in our mad dash on Monday that it left an itch that had to be scratched - three times in Steve's case, who had already gone back to enjoy good views on the Saturday morning. I couldn't join him as I was attending the excellent Butterfly Conservation AGM in Surrey, but after the event, and a few phone calls to seek permission and book accommodation, I found myself not heading home to Dorset as planned, but heading north to Chesterfield. Well, it's barely a detour really.
This morning the Crag Martin performed brilliantly and while the iconic backdrop of the Proact Stadium was not quite the iconic background of the crooked spire, I was happy with my shots and made to leave. The route back to the M1 took me through the Town Centre so I thought a quick look at the church in the sunshine was worth a go. No sooner had I pulled up than the Crag Martin appeared, so I was treated to an encore to the rapturous sound of church bells - and cooing birders.

When news of a Crag Martin in Chesterfield broke on Sunday afternoon I was strangely relaxed, having quickly worked out that I would struggle to get there before dusk. I was also wholly unsurprised as I was 'on call' and thus unable to leave Dorset in any case. This is a duty which I have performed just three times but on each occasion it has predictably coincided with a quality rarity: Little Bustard, Citril Finch and now Crag Martin. I'll let you know when I'm next on, you can book some leave and guarantee yourself a mega somewhere outside Dorset. With only a couple of movable meetings in Monday's diary, I travelled to work that morning by car with my gear packed just in case the opportunity arose to go on news. When the pager bleeped that the Crag Martin was still present, thanks to a saintly colleague who agreed to cover on my behalf, and a wise and generous boss who consented to a day off at short notice, I was able to leave for Derbyshire with a clear conscience.
Hooking up with Steve Smith in Wimborne, we made good time and arrived at lunch time to find a sizeable crowd looking up at the famous crooked spire of the Church of St Mary and All Saints which the bird had frequented all morning. No sooner had we joined the throng than a shout went up and the Crag Martin hurtled across the sky with a couple of pigeons before vanishing behind a tall building. I turned to slap Steve on the back but he was already legging it around the corner hoping for a better view - unsuccessfully, as it turned out. At least we had a tickable view, but it was not a good one, and photos had been out of the question.
No problem, we thought, it had gone before, we got the low down on its habits from James Lowen, and were confident it was only a matter of time before it came back. And indeed it was, just not in the time we had available to us unfortunately as it took until the next morning to reappear. We watched the clock tick 1400, 1430, 1500, we put more money in the meter, and crossed our fingers that it would come in to roost at dusk. But it wasn't to be. A frustrating day, and we both agreed the worst view of a British tick either of us had enjoyed, if enjoyed is the right word for it. So, as I often ask at the end of such excursions, was the 500 mile round trip, broken up by standing around in the rain for 4 hours in the centre of Chesterfield's Air Quality Management Area with nothing but oxides of nitrogen for sustenance, for a scrag end view of the bird worth it? Honestly, on this occasion I have to say no! And to rub it in, the next day the Crag Martin was perched on the clock face in these photos....