Far From the Madding Crowd

After a slightly fraught day on Friday involving, well, let's just say some caravans, a car park and the Dorset constabulary, the eminent Dr Sterling and I felt the need to seek out some tranquillity, so we left the bustling metropolis of Casterbridge and treated ourselves to a post-work field trip to Cerne Giant Hill. A bit of a flying visit before Phil caught his finger badly on some barbed wire and had to be virtually airlifted back home to Weymouth, but we caught up with two of the site's star attractions before his blood runneth over: the Duke of Burgundy and the Marsh Fritillary. The less celebrated and more modestly named Grizzled and Dingy Skipper were also on the wing. Despite being one of the best butterfly sites in Wessex, we had the place to ourselves for the time we were there. Lacerated digits aside, it was just what the Doctor ordered.﻿

All over the place - again

As promised, here is the second horribly late post from our travels around Cornwall and Devon at Easter. Castle Drogo in Devon is about half-way home for us from Cornwall, so a good stopover at this time of year as the Pearl-bordered Fritillary can be found around the base of the castle. 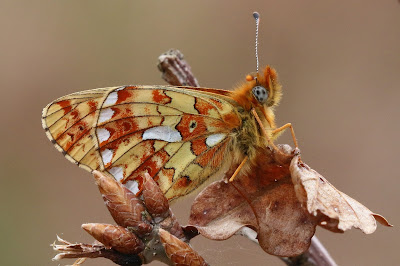 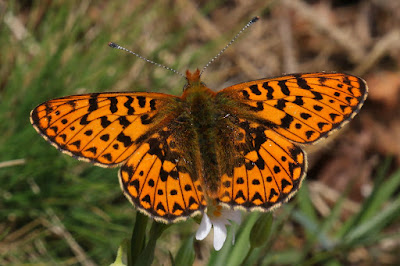 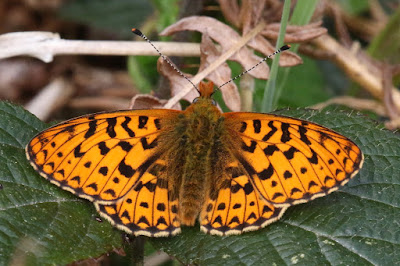 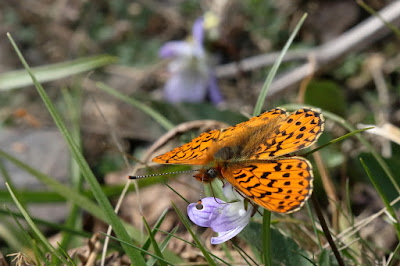 As we were packing up to leave Cornwall on a bright but chilly morning, a male Orange Tip fluttered weakly into the garden. Still torpid in the low temperature, we were able to get some close photographs. 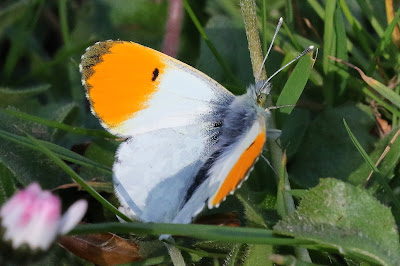 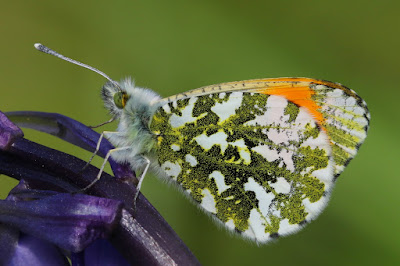 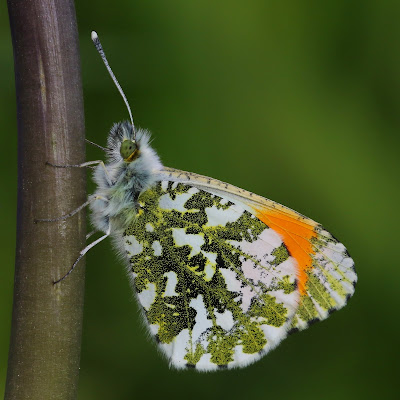 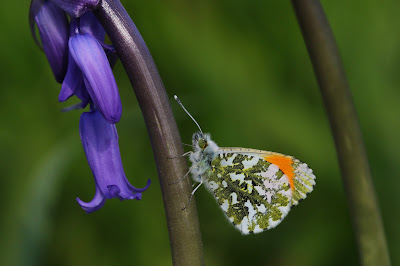 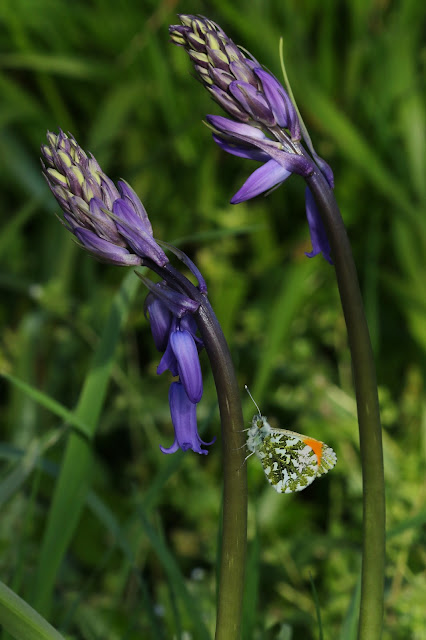 All over the place

A busy schedule, a disorganised hard-drive and a terrible memory have caused me to neglect to post details of our travels over the Easter break. So to make amends, here is the first of two posts with some photographic highlights of an unseasonably warm week in Cornwall and Devon:

Black Terns pass through my local gravel pit at Swineham but usually at a time of year when they are in their winter plumage. As I was attending the end of season party for Wareham Rangers Under-14s last Sunday (played 14, lost 10, drawn 3, won 1 - not their best) three of this species were reported in their summer finery at nearby Longham Lakes.

After the speeches and festivities were over I headed over to check out the Terns. Although spending much of their time roosting on a buoy in the centre of the larger southern lake, they did get up from time to time to feed, giving their shrill calls as they hawked over the surface of the water.

Longham is having one if its purple patches with the Bonaparte's Gull (still present last weekend), Red-rumped Swallow and Osprey being seen in recent weeks. Over the years I have seen Ortolan Bunting, Blue-winged Teal, Penduline Tit, White-rumped Sandpiper and Great White Egret there as well as commoner passage birds like Little Gull, Garganey and Little Ringed Plover. So another good record for the site, and no doubt more to come. 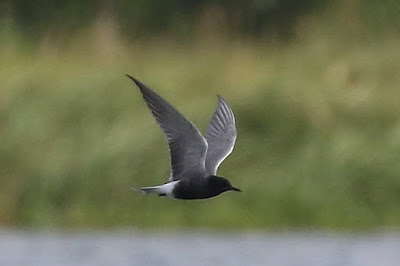 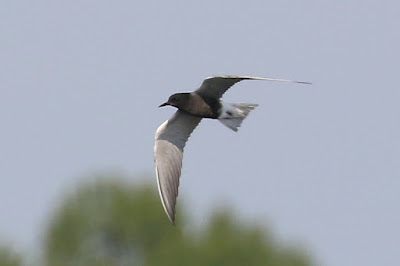 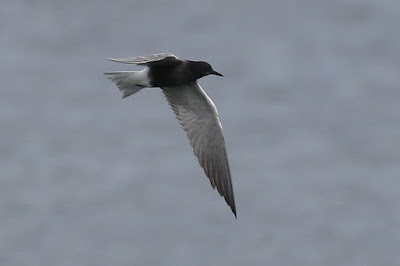 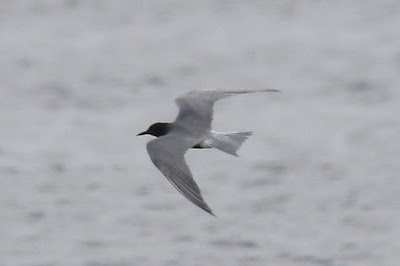 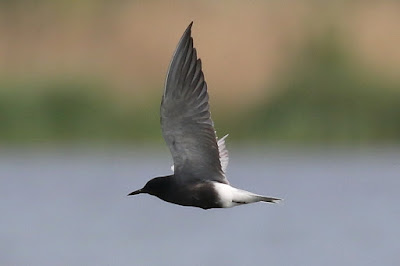 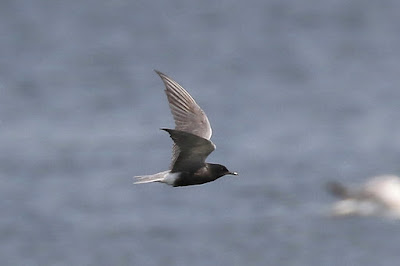 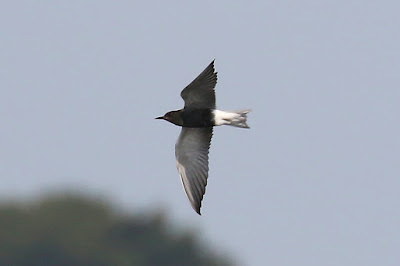 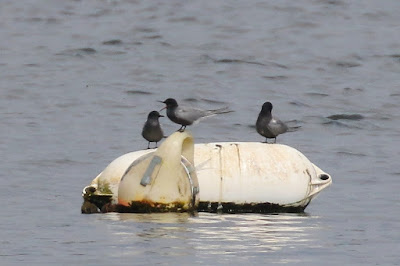 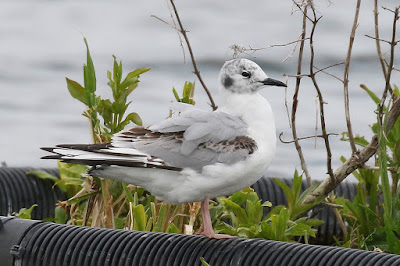 The day before my recent emergency excursion to Portland to see a Spectacled Warbler, I was on Portland shortly after dawn looking for commoner migrants - flycatchers, chats and warblers. Photographing a migrant male Pied Flycatcher well in Dorset has been a long-held ambition - and so it remains as I didn't see one on Sunday. But I did find a female in the Reap Lane area, alongside a couple of Spotted Flycatchers. Another Spotted Flycatcher was just around the corner at Avalanche Road, all entertaining and confiding birds to watch.
Before the flies, and therefore the flycatchers, had woken up, I had ambled up Barleycrates Lane where Whinchat was the early bird of the day - a couple of this attractive species were present. The Whinchats were matched for perkiness as the morning warmed up by a duo of male Redstarts which played their own version of duelling banjos, singing at each other across a Portland paddock.

﻿
﻿
It shouldn't be a surprise that a series of early morning visits to Portland in recent weeks have proven so rewarding for migrant birds, but what was a surprise was the apparent lack of birders I encountered around the middle of the island. I'm not complaining, or indeed criticising - I display borderline criminal neglect towards my own patch at Swineham, after all - but let's face it, there is a bit more incentive to get out on a spring morning if you live on Portland!