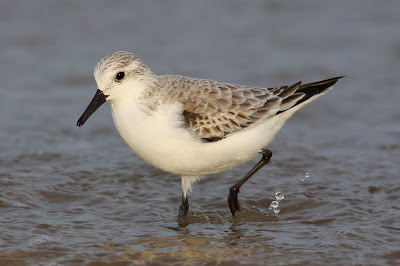 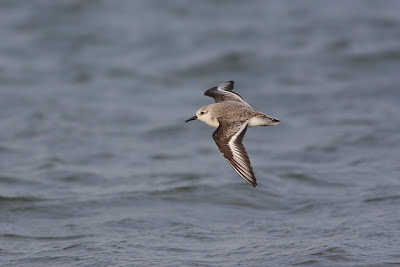 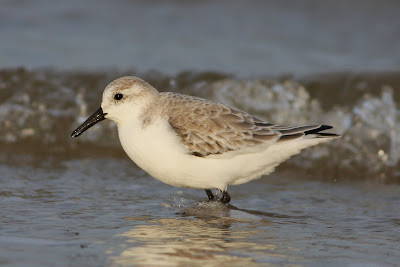 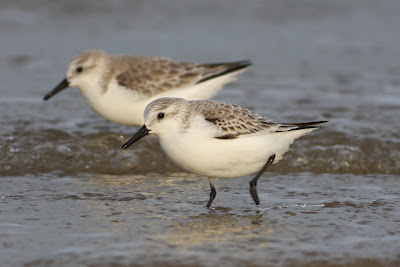 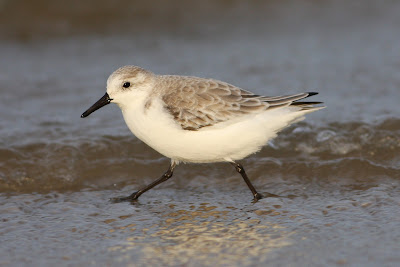 A traditional mid-winter pursuit today: find some Sanderlings on Studland Beach, kneel down on the beach 30-40 yards ahead of them waiting for them to come past for some photos, let the auto-focus lock-on and...watch them fly off over the waves when flushed by a dog; then find some Sanderlings, kneel down on the beach 30-40 yards ahead of them...you get the idea. Eventually hungry birds coincided with a dog-free stretch of beach, and me, and we were all able to do what we came for in peace for a few minutes.
Posted by Peter Moore at 21:59 No comments: 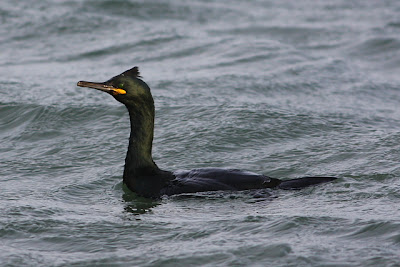 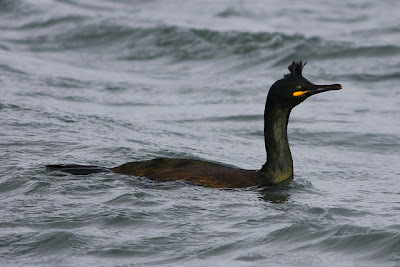 This Shag was fishing close inshore off Studland Beach today. There has been a Red-necked Grebe around recently but I was unable to find it in very windy and choppy conditions. Later in the calmer waters off Middle Beach a Sandwich Tern was also fishing while at least 19 Med Gulls were present with small numbers of Common Scoter, Brent Goose, Black-necked Grebe and Red-breasted Merganser.
Posted by Peter Moore at 21:58 No comments:

...was my initial thought on hearing that a 'probable' Spanish Sparrow had been hiding among its Hampshire cousins for over a month in Calshot. With rumours of hybrids initially complicating the picture, the promise of queueing with tetchy twitchers to get crap views through a condensation-soaked conservatory window, even for a bird of this rarity, really didn't appeal. I was sure Calshot was very nice, but the odds of Steve Akers style hospitality, with ground coffee, croissants and comfy chairs, Chipping Norton style, seemed slim. Given all this and the likelihood of a long-staying bird, I thought I would give it a few days before attempting a twitch. Then I remembered that the next few weekends might be compromised by visits from family and friends. It also emerged that the bird could in fact be seen from the wide open spaces of a public road, so a soup-kitchen style twitch might not be necessary after all.

By Tuesday I was contemplating a Wednesday afternoon attempt, but the offer of a lift from fellow Dorset birder and near neighbour Jol Mitchell persuaded me to take this morning off work instead. It was an excellent decision, as we arrived on site shortly before 0800, saw the bird at 0805 and watched it on and off for the next hour or so with a good-natured gathering. This was in turn watched from a safe distance by two of the key ingredients of an urban twitch in the early 21st century: bemused pensioners, themselves twitching behind net curtains and shaking their heads as if to say 'is this really why we went to war?'; and cocky schoolchildren, snapping away at the crowd with their smartphones so they can post photos labelled 'peedo' (sic) on Facebook. Such is the state of education in Britain today.

The initial views were difficult as the bird remained in a hedge, but a tick was gradually assembled as black chevrons on the breast and flanks revealed themselves, followed by the chestnut crown, white cheeks and narrow white line either side of the eye. It eventually made its way to the top of the hedge before flying off to a garden feeder somewhere. It wasn't gone long though, and returned to perch briefly in the open to catch the first rays of the sun. The light was still too low for me to get sharp photos, with a 1/100th of a second shutter speed the best I could manage with a hand-held lens, but I was happy enough to get anything on film.

Having bid adios to one rarity (or perhaps hasta la vista, as I suspect 'I'll be back' if it lingers), there was time to revisit the nearby Dark-eyed Junco, which showed almost immediately. Calling Crossbills and a singing Woodlark added even more value, the latter making a warm morning feel almost like spring. The journey home was a breeze through the gloriously clear and crisp New Forest air, and with twitching this easy we had plenty of time to exchange tactics on how to build up domestic brownie points for when the next rarity arrives. I proudly showed my son my photos of the Spanish Sparrow this evening. His reaction - 'looks like a sparrow' - suggested he didn't quite share my joy at getting the first tick of 2012 before the middle of January.
Posted by Peter Moore at 21:56 No comments:

Rock Pipit was the most numerous bird on the beach at Kimmeridge this afternoon, living up to its name among the eroding cliffs and cracked ledges of this geologists paradise. A thinner call from the mobile flock eventually revealed a single Meadow Pipit slumming it among the seaweed with its beach boy cousins.
With poor light and not many birds around I turned to ammonites embedded in the beach ledges to photograph - hundreds were on display at low tide. So few birds were there that I was surprised to see a tripods being erected by a group in the distance - but the mystery became clear as I approached to find a photography club rather than a birding group - not surprising with subjects like this: 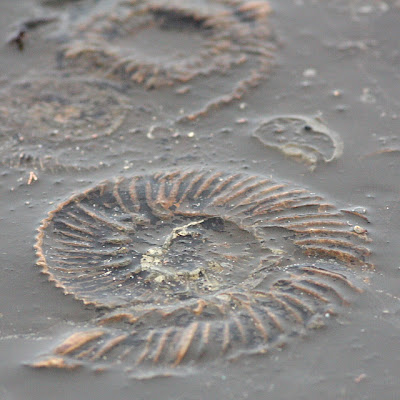 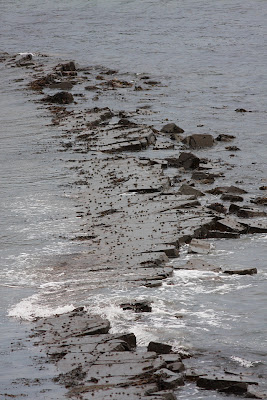 I don't make the effort to year-list these days, removing the need for a mad January dash to sweep up last year's long-staying rarities. This doesn't mean I don't want to catch up with them eventually, but doing so these days sometimes has to be combined with family-oriented outings. Haskins Garden Centre on the outskirts of Bournemouth does excellent lunches, sells toys and housewares and has a host of sheds for children to play in. Best of all, it is conveniently close to Longham Lakes, one of last year's Dorset rarity hotspots. While a sleepy Blue-winged Teal was undoubtedly the rarest of the host of duck on display today, a drake Smew stole the show. Enough to make the Black-headed Gull in the background of the picture below jealous anyway, as it was mobbing the Smew repeatedly, forcing it to dive frequently.

Although it remained distant it was still a stunning bird. Having been used to seeing flocks of over 30 in harsh winters on the gravel pits of Dungeness when I lived in Kent, it seemed almost out of place in balmy Dorset. Redheads of Smew and Goosander were keeping it company, however, and a 1st winter drake Scaup was also present to complete a good selection. This bird was much closer, diving with a group of Tufted Duck, so that the vermiculations on the back could just about be seen.

When news broke on New Year's Eve of a Dark-eyed Junco present in the New Forest since Christmas Eve, followed by negative news throughout New Year's Day, I started to think it might have been a hoax. Bad weather probably explained yesterday's non-appearance but someone fortunately persevered to relocate the bird by mid-morning today. We had visitors for New Year so an attempt yesterday or an early start today were out of the question﻿, but having seen them safely off to Kent after lunch the rest of the family were persuaded that a trip to our nearest National Park might be worth it. 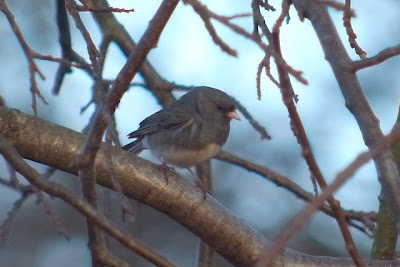 Brockenhurst is less than an hour from home but it was still gone 1430 when we got there. On arrival there had been no sign for the best part of an hour, and people were wandering off looking disappointed. Within 15 minutes, however, a shout went up when a small flock of Reed Bunting flushed from the long grass and among them, perched distantly in a dead tree against the light, was what I suspected to be the Junco. Advancing a few yards I adjusted my angle to get some trees in the background and confirm my suspicions. 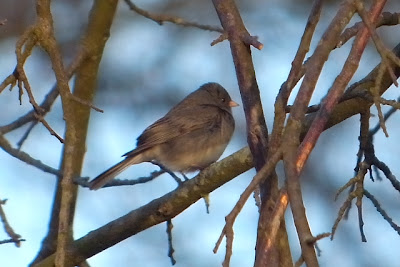 It flew a couple more times but each time remained perched in view on landing, and eventually flew back to the trees near the Hawkhill car park. Luckily it landed fairly close allowing some prolonged views and digiscoping attempts - a photo tick for me - although the light was by now fading and the bird was often partially obscured by branches. It was never easy to see well, but perhaps birders' expectations are getting too high as I didn't think it deserved the 'elusive' tag attached to it in the pager messages throughout this afternoon. 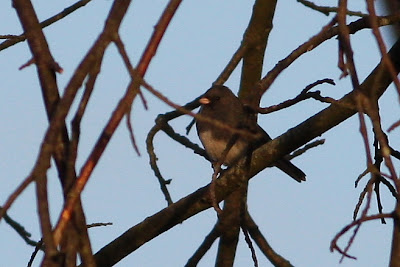 My only previous sighting of this species was a half-decent flight view of a calling bird in Somerset a couple of years ago, so to see this one perched today was a big improvement. It was also a relief to turn up to find room in the car park at a relatively modest twitch, only about 20 birders being present despite the rarity of this bird. Perhaps it had something to do with the fact that the blogosphere has been full of worthy promises to stick to patch-watching etc come the New Year. Being the fickle sort, and having made no such rash promises, I was glad to be free to tart around a neighbouring county. I do hope to get some 'proper' birding done in 2012, but, for now, here's to tarting!
Posted by Peter Moore at 20:42 No comments: