I risked pneumonia and rheumatic knees crouching in ankle deep water for ages photographing a summer plumaged Bar-tailed Godwit in Poole Harbour earlier this year. Then this one turns up at Swineham on a lovely still spring morning at point blank range. Typical! 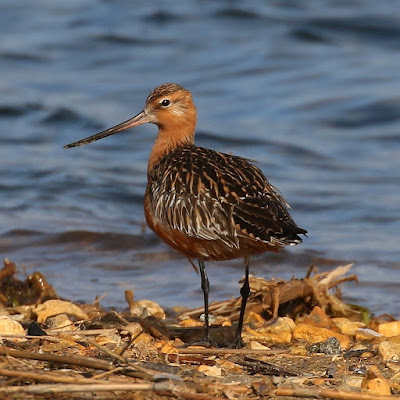 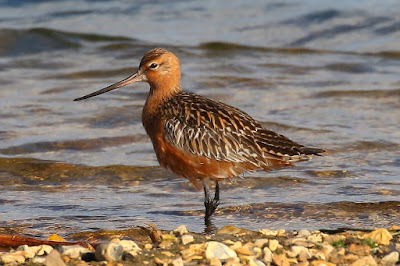 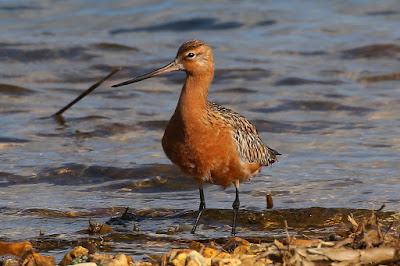 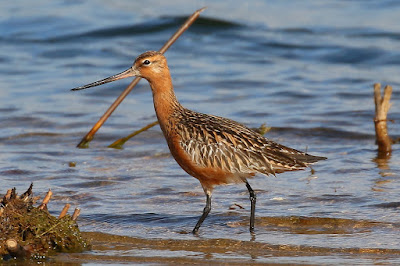 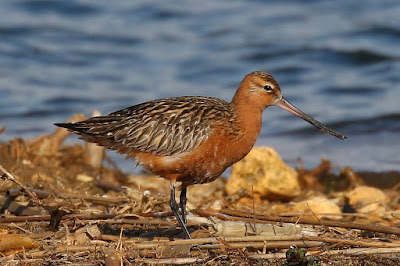 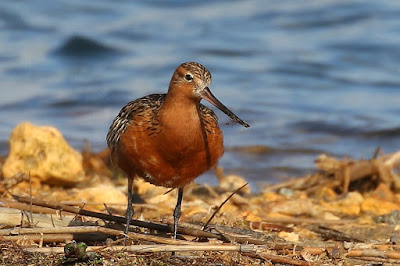 ﻿﻿Long-distance migrants have been arriving in force over the last week or so - I managed to catch up with ten of my favourites last weekend and this, all common summer visitors to British breeding grounds. Common maybe - but uncommonly difficult journeys they undertake to come back to these shores. A good excuse to flick through the old BTO Migration Atlas to marvel at the journeys they make, read the accounts of ringing recoveries and be reminded of the perils they face along the way.﻿﻿
﻿﻿﻿﻿﻿﻿﻿
Posted by Peter Moore at 21:02 No comments:

Hoping to see some migrant birds this weekend I weighed up the choice between flogging around what, for reasons of chronic neglect, I hesitate to call 'the patch', or heading to the sun-kissed heights of Portland. In the end I surprised myself by managing a bit of both thanks to a late evening walk around Swineham on Saturday and a day unusually free of other commitments on Sunday.

Predictably, Sunday on Portland was the more productive for both common and rarer migrant birds, though Swineham certainly held its end up, bless it, with a monster flock of hirundines, a few Willow Warblers and a couple of Sedge Warblers - not to mention a glorious sunset. I will return to those in a later post, and for now focus on the minor rarities which enlivened the visit to Portland - continental overshoots and a timely reminder that, whether you are thinking of voting for 'Brexit' or to 'Bremain', nature knows no boundaries.

A wash up from north of the border

I've used up all the superlatives about Scottish landscapes and lochs in recent posts, so here are just a few photos to sweep up the remaining highlights of our Easter week on the west coast near Oban.
Posted by Peter Moore at 22:16 No comments:

A big day out

It's traditional on our family holidays, if I pretend to be enjoying myself convincingly enough visiting shops, playgrounds, tea rooms etc, for me to be granted a day to myself to indulge in some wildlife watching and photography by way of a reward. And so it was last week in Scotland when I decided to try my luck on the rugged Morvern peninsula. The area enjoys high concentrations of both White-tailed and Golden Eagle, and there is also a good chance of Otter on the sea lochs.
Having just caught the third Corran Ferry of the morning, my first stop was on the Ardgour side to check out the Black Guillemot colony in the rusty piers by the ferry slipway. I had seen plenty already in Oban but you can't have too much of a good thing and they did not disappoint.﻿
After Ardgour it was across familiar but still breathtaking territory to Strontian, stopping occasionally for photos of Great Northern Divers in Loch Linnhe from the roadside. From there I broadly followed an itinerary in Gordon Hamlett's Best Birdwatching Sites in the Scottish Highlands, along the southern shore of Loch Sunart for a chance of Otters and Eagles. I saw neither, but a close encounter with a pair of Ringed Plover and a fresh-in Wheatear were some reward.
Then it was a long climb up Gleann Geal, pausing occasionally to scan for raptors, before dropping back down towards the Black Glen and the choppy waters of Loch Arienas. Pairs of Goosander and Goldeneye were the best I could manage there, so I retraced my steps to get back on the road to Lochaline. The guide book suggested scanning for Otter from the ferry slipway, so being the obedient sort that's what I did, and the first shape I 'scoped on the water turned out to be one. If only it were always that easy..
A scan with bins down the Sound of Mull caused a double-take when I saw the huge bulk of what could only be a White-tailed Eagle sitting on some distant rocks. I returned to the car to grab the telescope, only to find the bird gone by the time I had set it up! Very frustrating, it would have been a good telescope view, and despite much scanning I was left to conclude that it must have headed off to the south rather than in my direction.
No matter, I wasn't going to let it spoil my day, and by now it was already time to be heading back, which I did via Kingairloch and the coastal route along the shore of Loch Linnhe. An impressive stretch of highway pock-marked by rockfalls, it passes under a high cliff reminiscent of the road under the Gribun Rocks on Mull. Not a hugely productive day on the Eagle front, then, but an enjoyable trek through some outstanding landscapes all the same. Can't wait to go back.
Posted by Peter Moore at 22:32 No comments: