Sandbanks in Poole is famous for being home to many of those on the nation's rich list, living in some of the most expensive real estate in the world. But it wasn't that which attracted me there earlier today: rather it was birds, and one in particular - a Long-tailed Duck, a scarce visitor to Poole Harbour, which has been feeding just off the groynes which protect the millionaires from getting wet feet. Very posh groynes these too, they have flat concrete tops so you can totter out in your Jimmy Choos rather than clambering over the boulders.
At first there was no sign of the Duck, which I put down to the low tide and the presence of what must have been the highest concentration of dogs on any beach in Christendom. But just as I was about to give up I saw it flying in from the Harbour mouth. It landed a couple of groynes away back up the beach where I soon caught up with it for closer views.

I positioned myself on the end of the nearest groyne and waited for it to surface nearby, which it did repeatedly, at one point coming within a yard of the groyne. As I repositioned myself on the boulders I stumbled across a pair of Purple Sandpipers which I wouldn't expect to see here until high tide normally. Although the late afternoon light was very low, they were every bit as obliging as the Long-tailed Duck.
Posted by Peter Moore at 21:27 No comments:

After successfully twitching a Dusky Warbler on Portland on Saturday, I pushed my luck both at home and in birding terms by seeking permission to chase an Isabelline Shrike around Hengistbury Head at the other end of the county on Sunday.
Permission was granted, but with a condition attached: I had to take my 7 year old son, who was otherwise in danger of spending the whole weekend indoors. While not exactly a patient twitcher, he's pretty good company so this was no hardship, though getting him out of the house proved difficult: my suggestion that a nice walk with me might be fun was met with tears rather than the hoped for expression of joy.
When I pointed out that crying at the idea of spending time with your Dad might be considered offensive, not to mention frowned upon by no less an authority than Father Christmas, he warmed to the idea and we headed off having made our peace.﻿
﻿I tried to make it fun, giving him his own bins - a battered but serviceable pair of Opticron 10 x 42s - and taking some old short-wave radios which turned up in a clear-out recently, so we could stay in touch, Scilly style, on our twitch. This seemed to do the trick as he waited patiently for the best part of an hour before the Shrike eventually perched up on top of a bush. It was good timing as we were on a bit of a deadline, needing to get back to Wareham to accompany the other son to a football match (a pulsating 5-2 home win against Broadstone, since you ask).
It was a wet, gloomy day, so photography was a real challenge. The Shrike, a first winter bird, was slightly too far away for my autofocus to lock on easily in the low light, but with perseverance and luck, as it flew into a nearby bush, I was able to get some acceptable shots and excellent telescope views for the both of us. My own juvenile was impressed, especially when I pointed out that his brother has yet to see Isabelline Shrike. Sibling rivalry comes in handy sometimes.

With November murk lying low over the Frome Valley this morning, it was time to play away, and head for the impossibly exotic, sun-kissed horse-paddocks of Portland. A Dusky Warbler had been present in Weston since Thursday, and I had yet to see one in Dorset. I awoke later than planned, and with a headache, the product of drinking pathetically small amounts of beer, which is enough to induce a hangover these days it seems.
Arriving at Avalanche Road around 0900, I was prepared for a long wait but within half an hour the only other birder present alerted me to the calling bird at the other end of the paddock to which I was stood. The Dusky Warbler had been extremely elusive in previous days but we dropped lucky as it sat out in the open for the best part of a minute preening. I stuck around until midday in the hope of improving on my original photos, and despite the bird coming very close on occasions, it only ever sat in the open at some distance, and then only briefly, hence the heavily cropped shots here.
With a good Dorset tick in the bag from the top of the famous rock it was time to head down to the bottom and the migrant trap of Portland Castle. Three Chiffchaffs and two Black Redstarts were aron the castle walls, and the wintering Black Guillemot eventually appeared out in the harbour with a Great Northern Diver for company.
A final stop at Ferrybridge produced another trio of Black Redstarts, these much more obliging as they fed on the tideline and around the Chesil Beach Centre. Normally stopping here would be a good excuse for fancy coffee and cakes, but there was too much going on outside to be tempted today.
It was incredibly mild for mid-November, which may have helped explain the lack of waterfowl in Portland Harbour - apart from the returning Tystie, a couple of Great Norther Divers and a handful of Red-breasted Mergansers there wasn't much to be seen. But still a fruitful excursion, and good to keep the county list ticking along as the clock had pretty much stopped on that in the last few months. 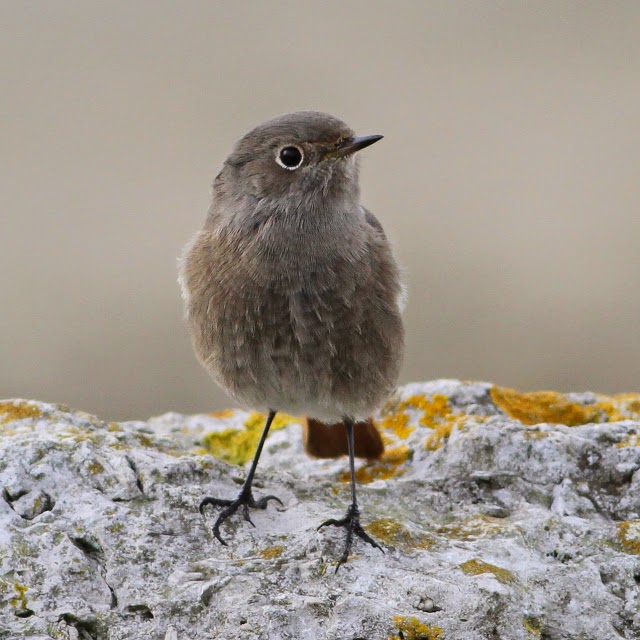 I was finally discharged by the NHS last week after making a full recovery from last November's unfortunate collarbone snappage, but unlike this time last year when I was confined to barracks, this one has yet to produce a conveyor belt of accessible, long staying mega-rare birds to torture the immobilised twitcher.

This should mean a bit more time for updating the blog, and a few weeks ago I pledged to make more of an effort, but the pledge has not been entirely fulfilled. Not since the Eastern Crowned Warbler at least. Hang on, let me just say that again: Eastern Crowned Warbler. There, feeling better already. Rather than trot out the usual excuse of busy busy with work, though, I do have a genuine excuse this time in that, in recent weeks, becoming a match correspondent for Wareham Rangers Youth FC Under-12s, for whom son George regularly turns out, has created competing demands on the time I have available for writing stuff.
You know what folks, I really think this could be my ticket to the big-time: if I catch the Club Secretary's eye, I might get promoted to the Under-14s and then the sky's the limit - well, the under-15s is the limit technically but you catch my drift. And before you know it I'll be guest on the Wareham St Mary Primary School 'Question of Sport' Christmas Special panel and, who knows, maybe even ghost-writing Joe Mitchell's footballing autobiography...
In truth, writing the match reports has proven a lot easier than writing bird blog posts, as (i) material isn't in such short supply - even a bad game lasts for 60 minutes, about which it would be difficult to find nothing to say (ii) at this level, goals are usually flying in so there is plenty to write about (iii) Rangers are having a belting season so it's more pleasure than chore (iv) parents of youth footballers are quite easily pleased: as long as a match report strings together a random selection of football clichés in roughly the right order, and mentions their kid at least once, they seem reasonably content. Woe betide you, however, if you credit a goal to the wrong child, as I did at my first attempt. That aside, and parking the frustrations of youth football journalistic etiquette, which prevents obviously dodgy penalties being described as such, and it's quite enojoyable really.﻿﻿﻿ Anyway, this weekend's fixture (a thrilling 3-4 away win at local big boys Poole Town) kicked off earlier than usual so there was just time to have a look around Swineham, my traditional Sunday afternoon stroll around which has long since been a victim of the fixture list. Nothing more noteworthy there than a pair of Black Swans, which, being fully winged and un-ringed, naturally gained instant admission to my patch list. Well I have to keep it ticking over somehow...

As if in heavenly retribution for this diabolical lowering of standards, as I stood on the most open part of Swineham Point, and started to count how many seconds there were between the first flash of lighting of the afternoon and the clap of thunder which followed, I found to my consternation that I didn't quite get to '2'. If I've been closer to the centre of a thunder storm I don't recall it: it really was the most almighty, gut-trembling noise, and I don't mind admitting it left me feeling quite awe-struck, and not a little exposed. All the fowls of the air - Godwits, Little Egrets and Lapwings - must have felt likewise as they flushed from previously unseen roosts, and I scurried back to the shelter of the nearest hedgerow, lest I be smote down for unethical listing. So the Black Swan record is now firmly back in category 'E'.