The shock of the new

It's been a long time since I added a bird to my Swineham patch list - mainly because it's been a long time since I've been there - but with a bit of wetter, colder weather recently I made the effort yesterday. To my great surprise I was rewarded with a flock of 22 Barnacle Geese which, unbeknown to me at the time, had been seen earlier in the day flying west past Hengistbury Head and through Poole Bay before pitching down on the gravel pit. The origins of such birds is inevitably moot - there are feral flocks elsewhere in Britain and on the near continent, as well as the wild populations from Greenland, Svalbard and high-arctic Russia. While one of the former seems the more likely explanation, I'm ticking them anyway!

A day out with Messrs Cook and Forster

Whilst travelling back from a short-range twitch to Devon on Saturday, news broke of a Forster's Tern in Essex. I have a bit of history with this species, as having only started chasing rare birds in the late 1990s, and dipped a couple of times on a long-staying bird at Tollesbury Wick in the same county, there hasn't been another readily accessible British occurrence since. Speaking of history, J R Forster, after whom the Tern is named, was an 18th century clergyman naturalist from Danzig who accompanied James Cook on his second voyage around the world in 1772-73. During this, according to Beolens and Watkins, he gained a reputation as a 'constant complainer and troublemaker'. A man after my own heart then. 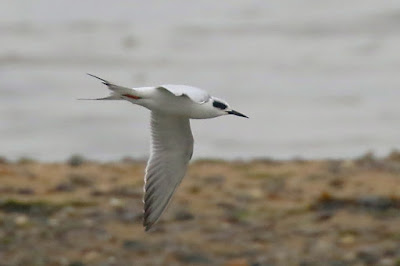 Forster's Terns can be long-stayers when they do turn up, so while my initial thoughts were 'wait and see if it sticks around until next weekend', realising that next weekend I was unlikely to be able to leave Dorset, I decided to go for it on Sunday, if family circumstances allowed. Fortunately family circumstances were unusually accomodating and I found myself free to go. 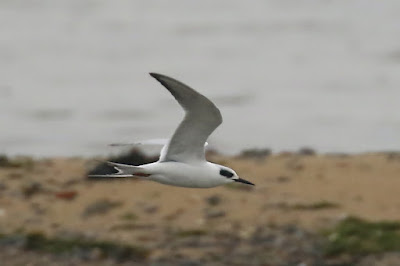 Most local birders had seen the Dorset Forster's Tern found by Brett Spencer in the winter of 1995-96, so it looked like I would be travelling alone. No matter as, like Forster, I had a Cook to keep me company: Alastair, the England cricket captain, and the rest of the team on Test Match Special. Although they were all in India for the 2nd test, they were beamed into my cabin by the miracle of the DAB wireless and made for excellent company on the long journey to Essex. 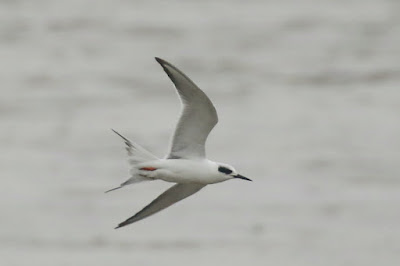 Storm Angus risked putting a dampener on my plans so I resolved to leave Dorset after it had blown through, hoping to arrive at Mistley Quay, where the Tern was last seen, around breakfast time. The plan went pretty smoothly, until, as I got within half an hour of the Stour Estuary, the pager bore the dreaded 'no sign' message. Bother. I pressed on regardless, figuring that there was still plenty of time for it to be found, especially as it was midday before it was discovered the previous day, suggesting that the state of the tide might have something to do with its appearance. 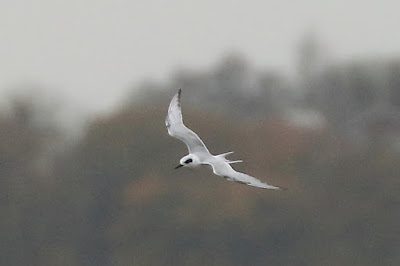 On arrival, the view from Mistley Quay was dominated by the mud of the Stour Estuary at low tide. A large group of twitchers was looking out forlornly onto this scene but it didn't look very tern-friendly so I quickly resolved to head east up the Estuary to check out areas with a bit more water. My first stop, an exposed spot just north of Wrabness, saw me beat a hasty retreat in the face of strong winds and lashing rain. My second was more sheltered but equally unsuccessful. I pressed on as far as Harwich, figuring that harbour mouths can be as good a place as any to look for terns, but as I peered over the harbour wall, where I was joined by a couple of carloads of birders doing likewise, the Tern was reported as having been seen further back up the Estuary, a couple of miles east of Mistley. So I had the right idea but had overshot by a few miles! 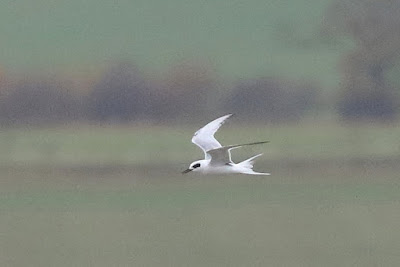 To cut a long story short, 30 minutes later I was watching the Forster's Tern, identifiable even at distance by its comma-shaped black ear patch, feeding distantly out over the storm-lashed water. With the tide rising, it was only a matter of time before the Tern reappeared at Mistley Quay, where the main river channel is much closer to the shore, so I headed back there hoping for a closer view. Sure enough, the rare visitor from North America eventually treated us to a couple of reasonably close fly-pasts - it did so in horrible light, but I was happy to get a few record shots of possibly my last new British bird of 2016. 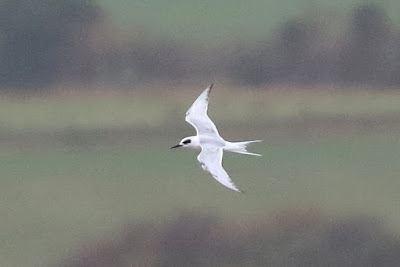 Motivation and opportunity to get out with the camera have both been a bit lacking recently. With autumn migration largely over and done with, the allure of Swineham in mid-November is pretty limited, being, as it generally is, mild, wet and devoid of interesting bird life. I was discussing this problem with fellow Swineham regular Trevor on the train on the way home from work mid-week, and by the end of the conversation we had talked each other into twitching the long-staying Desert Wheatear in neighbouring Devon if it remained until the weekend. A patch-neglect pact, if you will. 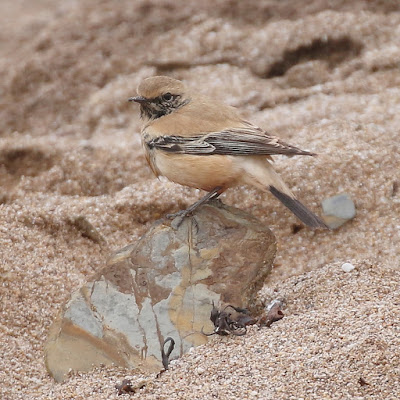 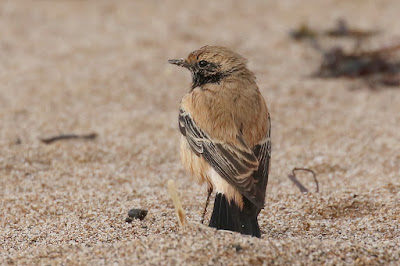 Trevor doesn't generally twitch but had never seen Desert Wheatear in the UK, and I had never seen a male, incentive enough for us both to make the effort. After an exhausting week at work neither of us fancied an early start, so a leisurely departure time of 0800 was agreed and not long after the good news came through that the Desert Wheatear was still present. This made the journey a breeze, and despite signs diverting us off the A35 due to an accident (if being dumped on the outskirts of Axminster with literally no signage can be called a 'diversion') we followed our noses westwards arriving at Thurlestone around mid-morning. 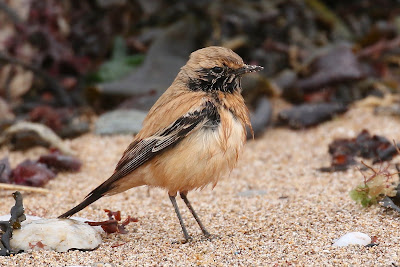 The forecast had been sufficiently good for the morning to support, we thought, our decision not to head down too early but we stepped out of the car into the what appeared to be an early appetiser for Storm Angus. A fierce squall soon had us running for cover behind a raised bank at the back of Leasefoot Beach before we had even raised our bins to look for the bird. The squall had also caused other birders to flee the beach but as we stood there wiping our spectacles, wondering if it had also caused the Wheatear to beat a retreat, a passer-by who had seen it earlier pointed it out in a favoured spot on the beach. 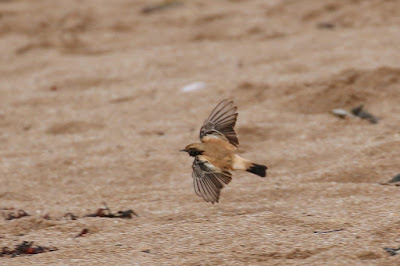 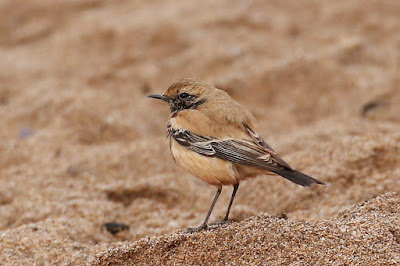 With the squall passed we were soon crawling around in the sand trying to get close enough for a few photos. The Wheatear was reasonably confiding but also very active, flying regularly to the end of the small beach to preen on rocks and the low cliff face before heading back to the strand line to feed. Unfortunately the weather had taken its toll and the bird was looking a bit bedraggled, its breast feathers looking particularly waterlogged. Any concerns that this might have done any lasting damage were fortunately allayed by photos from the following day which showed it looking all fluffy and handsome again. A charming bird, and an enjoyable excursion. 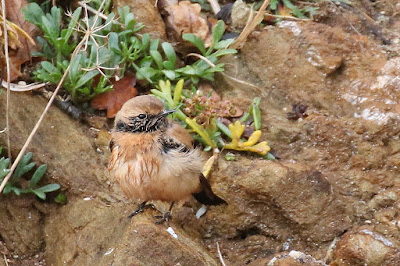 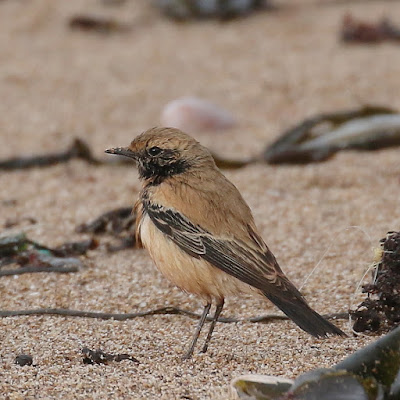 Harry Potter and the Chamber of Commerce

Half-term already seems a long time ago, and in case recent posts have given the impression that I spent none of the school holidays with my beloved children, be assured, dear reader, that this was not the case. Despite thrashing the patch and hustling up and down to Portland at every opportunity, I managed to sleep in the same house as them every night, and on Thursday the whole clan even made it to Abbotsbury for a 'Family Fright Night' at the Sub-tropical Gardens. I can't say that queueing for 30 minutes for a 30 second ghost train ride was the highlight of my week, but then I did drive for 12 hours to get a 12 minute view of a Dunnock a few weekends back, so I am perhaps not the best judge of what a good time looks like. Seeing the gardens lit up at night though was, by common consent, pretty cool.
The following day saw us continuing the supernatural theme, this time on a proper train, heading to London for a self-guided Harry Potter themed walking tour. This took in the Millennium Bridge, Leadenhall Market, Old Scotland Yard, Downing Street, the Houses of Parliament and various other sights, all of which the serious Potterarati would recognise from one or other of the juvenile occultist movie franchise.
The tour reached its crescendo at Kings Cross station, where, in an uncharacteristic break from their corporate missions of imposing misery on the travelling public, and expecting them to pay inflation-busting fare increases for the privilege, the various enterprises formerly knows as British Rail have thoughtfully created a fake Platform 9¾ to keep visiting fans of the bespectacled YTS-warlock out of the way of busy commuters.
Even more thoughtfully they have opened a Platform 9¾ retail emporium, which, by some sorcery I have yet to fathom, relieved us of several higher denomination banknotes in exchange for a couple of plastic wands and some confectionery. Bargain. Mind you, I speak as someone who spent more than that in September flying to the Isles of Scilly to see a Swallow, so I am perhaps not the best judge of what represents good value for money. Besides, the children are delighted with their wands, especially the little one, whose new toy is sufficiently high tech that it actually changes the channels on the TV, much to his amusement, and to everyone else's annoyance. The wand of the elder son (which I guess I should call 'the elder wand' as an in-joke for the Potter fans?) is more substantially made but, disappointingly given the product, performs no such magic.
After a brief return to an altogether more sensible lifestyle choice of rising in the small hours of Saturday morning for a day trip to the Isles of Scilly to see nothing in particular (more on that in a later post), Sunday saw me back on the touchline cheering on Wareham Rangers U-14s and son George to their first point of the season in a thrilling 1-1 draw with Merley Common Falcons. So, a slightly disappointing half-term week on the birding front by the end of it, but a very rewarding one from a family perspective. And that, I am reliably informed by the sort of people you won't find on Bubo, is all that should matter.