This was too easy: I saw both Paddyfield Warbler and Spanish Sparrow this morning within minutes of arriving and here I was, on schedule, at the Hawkhill Inclosure waiting for the Dark-eyed Junco. Paul Gale, who I only normally see on the annual trip to the Isles of Scilly, was just leaving and reported the bird had been showing well not long ago. Over an hour and a half later and I was starting to think my luck had run out. Then it appeared from among the Chaffinches and Reed Bunting, flew at me and over my head zit-zit-zitting as it went, landing in a rhododendron bush under which I was standing. I could just about see it, about 10 feet away but badly obscured. Eventually it made it's way down to a seeded stump and gave stunning views from here and in the branches of a fallen conifer nearby. 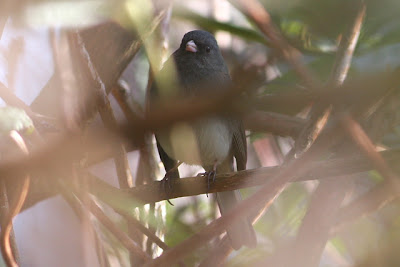 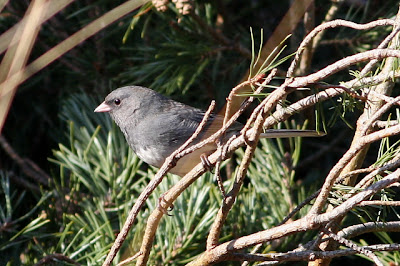 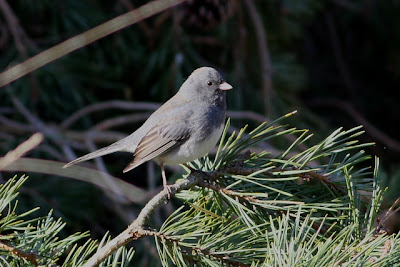 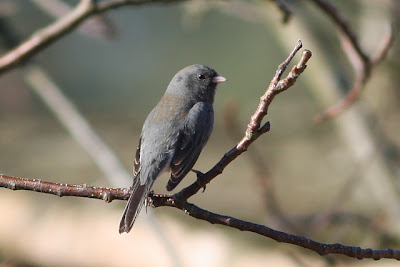 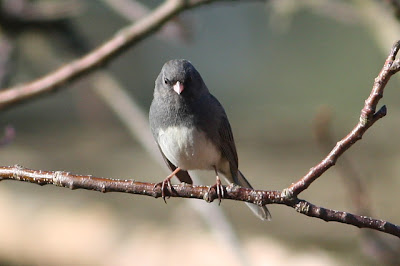 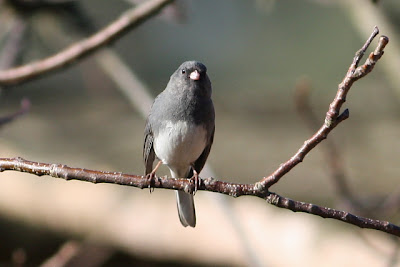 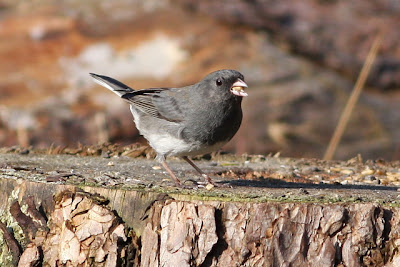 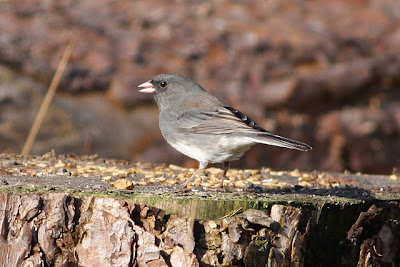 With the first part of today's plan enacted (see previous post), I headed west in the hope of photographing the Spanish Sparrow at Calshot. I first saw this bird on 11th January but my photos were a bit disappointing. On arrival today I was fortunate that a small group were already looking at the bird, and even more fortunate that one of them kept a sharp eye on it deep in the hedge after I had momentarily lost track of it. Crossing the road to photograph it from a bus stop meant that the light was right behind me. The Sparrow remained deep in the hedgerow, preening for some time before eventually coming out into the sunshine to pick lichens off the branches. 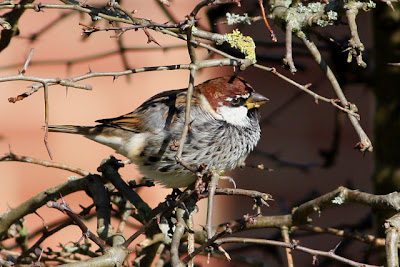 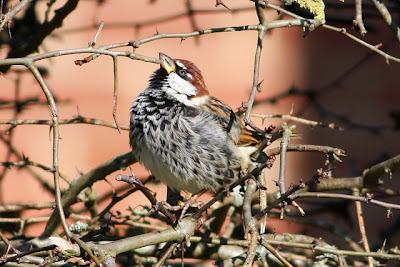 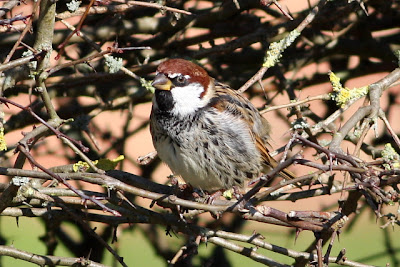 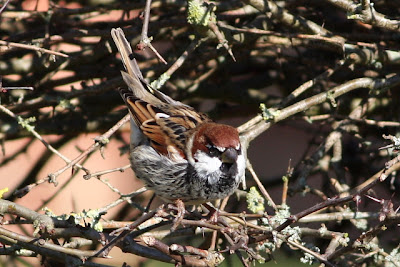 A day off rarely combines with a good forecast and a lack of other commitments, so today was an opportunity to indulge in some rare bird photography. I had seen most of the south coast's collection of long-staying rarities earlier in the winter, but not photographed any of them well, and the Paddyfield Warbler not at all. So, in my dreams, I'm thinking: Paddyfield Warbler at 0800, Spanish Sparrow at 1100, Dark-eyed Junco at 1300, bacon sandwich at 1400 and back home in time for the Carling Cup Final at 1600.

Initially very elusive, the Paddyfield Warbler seemed to be getting seen more regularly from the north wall of Pagham Harbour in recent days, and soon after my arrival (slightly behind schedule at 0815) it was indeed refound there by one of the surprisingly large number of birders looking, given how long the bird has been around. It was very active. mobile and acrobatic, and showed well but a little distantly for my 400mm lens. Fortunately the light was sufficiently good to allow some robust cropping of the shots below.

The supporting cast for the Paddyfield Warbler today included:

Auks, Ravens, Fulmars and Jackdaws were getting ready for the breeding season at Durlston today, all watched closely by a Peregrine Falcon.

The Spanish are coming...

First the Spanish Sparrow, now a Spanish Glossy Ibis. The history of this bird is a bit clearer, however, thanks to a colour-ring fitted as a nestling in 2004 at the Doñana Biological Reserve in Southern Spain. The same bird was photographed in Devon in January and features on the Devon bird news blog. Please send any further sigthings, with co-ordinates, to anillamiento@ebd.csic.es. Wareham Common, where the Ibis has been present on and off for about a week, is a short walk from my house, so I was able to enjoy a low-carbon twitch on foot before breakfast this morning. My train journey to work takes me over the site so there is even a chance of a top drawer 'train tick' later this week!
﻿﻿﻿ 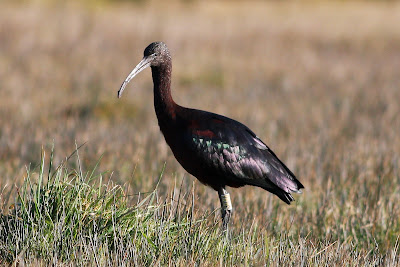 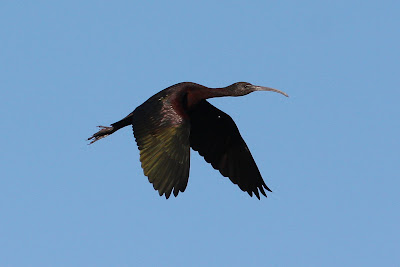 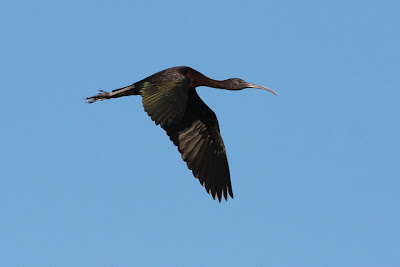 'So why is it called a Yellowthroat then?'

Twitching a bird at first light is an acquired taste, and although I've done it plenty of times, I rarely enjoy it. Sometimes you need a chainsaw to cut the atmosphere, and if the bird isn't found quickly, tiredness kicks in and the tension builds, until even the sound of birders having a friendly chat when they should be looking and listening for the bird is enough to spark an exchange of words.

So today I decided to play it cool before the 250 mile journey from Norfolk to Gwent for the Common Yellowthroat, resolving to enjoy a hearty breakfast and head off if positive news came through from Wales. This was a fairly safe bet as the bird had been present for some time, presumably over-wintering, and seemed unlikely to go anywhere. However, the typhoon forecast for Saturday, the prospect of an even bigger, tetchier crowd tomorrow, and the continuing possibility of the bird departing at some point were enough for me to not want to leave it to the weekend. As I left the North Sea coast behind, I also rationalised, with impeccable twitchers' logic, that as my final destination was Dorset, the Welsh side of the Bristol Channel was positively en route!

Breakfast dispatched and bills paid, I left my B&B just as the pager reported that the Yellowthroat had been refound. As I hit the A149 it was reported as 'elusive', by the A14 'mobile' and, by the M5, 'mobile and elusive'. On the M50 a pager message asked birders to view from a sensible distance, conjuring up images of the bird being pursued into hiding by desperate twitchers. On arrival, at about 1300, there was a lot of aimless walking about going on, followed by a couple of false alarms, and eventually a reasonably convincing claim. Just as one of the shocking number of grumpy curmudgeons present was attempting to scotch the latest rumoured sighting, which was quite close to where I stood, a ridiculously gaudy yellow streak flew past my face into a thick holly bush.

I was sure it was the Yellowthroat but it was hardly a tickable view. It took another hour to get a clear look at the bright yellow undertail coverts vanishing into the bracken, and two more to see the whole bird in full view - perching just long enough for a distant photo in poor light. Having ranged over a wide area, the bird eventually settled in a hedgerow, but hopped from one side to the other, twitchers in hot pursuit. If filmed from a distance and played in fast forward, they would surely have been an instant Youtube hit.

By 1700 the crowd had shrunk to about 30, the collective mood had improved and most of those left at the end of the day sounded like locals. Three chatty Welshmen behind me, with scant regard for stereotype, were deep in conversation about wellies, clearly covetous of the fancy wool-lined ones apparently owned by an absent friend, about whom they spoke loudly, conspiratorially and bitterly. Three hours earlier this might have got on my nerves, as it would have drowned out the Yellowthroat's Robin-like call, which it seemed to give just before showing (Cetti's please note). As it was, with my third and best tick of 2012 in the bag, it was all quite entertaining.

﻿Trips to Norfolk are a rarity today compared to when I lived in Kent, so a full day in the county was a good opportunity to revisit some old haunts. At Holkham, I was unable to locate a Rough-legged Buzzard or the wintering Shorelark, but did catch up with some distant Eurasian White-fronted and Egyptian Geese, as well as a Muntjac Deer. Titchwell RSPB reserve was unusually quiet, and while the Coues's Arctic Redpoll present yesterday was absent today, a pair of Velvet Scoter were reasonably close offshore.
﻿﻿﻿A melee of gulls on the beach at Holkham merited closer inspection, if only to find out what they were feeding on. It turned out to be a large number of washed up starfish and raozor clams - the local waders also joined in the feeding frenzy.

﻿﻿﻿﻿ There is always something worth seeing at Choseley drying barns. Unless it's 2004, you're me, and you're looking for a Pine Bunting. Two weekends running. Today it was a decent flock of Corn Bunting and Yellowhammer, plus a few mad March hares who had gone loco a month too early.

Back at Holkham for dusk, dipping on the Rough-legged again, news broke of a Common Yellowthroat in Gwent. I should have guessed that if I wanted another 'mega' to turn up off south of Birmingham I would have to head north of it. This presented something of a dilemma: cut short the Norfolk trip, or hope it sticks around. The thought of missing the excellent breakfast at Cobblers B&B in Wells persuaded me to check the weekend forecast, wait on news and make the decision on a full stomach...

Standing just out of reach of the breaking waves at Titchwell and Holkham today presented some opportunities to photograph passing waders.

After Cantley and Kelling, next stop on my Norfolk tour was Salthouse Beach where a flock of Snow Bunting had been reported. It was blowing a gale and there was no sign of the Buntings until, after a few minutes trudging around, a flock of pebbles spread their white wings and took off. 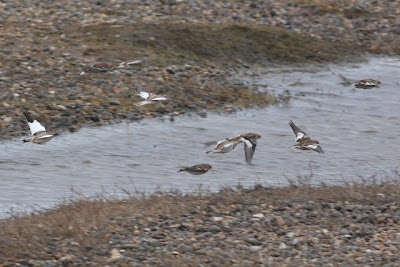 When they landed again their camouflage against the pebble beach was superb. More obliging were the Knot and Turnstone apparently feeding on breadcrumbs in the car park.


I was staying in Wells for the night so ended the day at Lady Anne's Drive, Holkham, with a few thousand Pink-footed Geese. They were feeding on the freshmarsh before heading off to the east in large flocks to roost.

Life is a cabaret...

After successfully twitching the Lesser White-fronted Goose in Norfolk this morning, next stop was Kelling on the North Norfolk coast. Here a very accommodating resident birder was feeding truckloads of niger seed to a small flock of Redpoll, including one, possibly two, much rarer Coues's Arctic Redpoll, enabling all and sundry to peer over his garden wall, marvel at, and get confused by the plumage variation in this complex family.
After a short wait, Redpolls started to appear and picking out the Arctic among them was pretty straightforward - a real snowball, much more obvious than the Coues's I had seen at Titchwell a few years ago. Most of the other Redpolls appeared to be cabaret (Lesser Redpoll) but one or two looked larger, paler and good candidates for Mealy.
﻿﻿ ﻿﻿I've always struggled with the finer points of Redpoll identification, and it was pretty quiet on site so I had to try and work it out for myself (where are the know-alls when you actually want one?). Even with the help of several photo-ID articles I remain slightly confused - but my best guesses are below, and comments or corrections would be welcome!
﻿﻿﻿
﻿﻿
Posted by Peter Moore at 03:01 No comments: