The joy of flex

One of the small comforts of my job is a flexi-time system which makes the odd twitch possible without eating into precious family holidays. So a Daurian Shrike on Portland was all the justification I needed to book a couple of hours off this afternoon. The bird had been on the Bill Road yesterday, but as I walked down from Southwell it was ominously quiet, save for a bloody-billed Kestrel. Hopefully not Shrike-blood, I thought...
Turning off the road past Culverwell, I eventually caught up with the Shrike at the far end of a large paddock. A photographer who was packing to go advised me to keep an eye on a nearby bush to which the bird had returned on several occasions.

Sure enough, within ten minutes it did just that to give superb views of a very attractive rarity. October has been pretty quiet for me so far, but with a week on the Isles of Scilly coming up (note: this is one of those 'precious family holidays' of which I spoke earlier), a Dorset tick of such quality was a good way to whet the appetite.

After an hour or so the Shrike appeared to go to roost in a bush right next to the path. I had to pass this on the way back to the car so my last view of it was a badly obscured one as it moved around low in the bush, but only about 6 feet away. Talk about close to greatness.

Lower hanging fruit for my County list was also available this evening in the form of a Ring Ouzel, which I have somehow managed to avoid in Dorset despite almost five years of residency. This is obviously not a bird you are going to twitch, and I was sure I would just stumble across one one day, but it just hadn't happened until today. 'Too much twitching' chided Hamish Murray - Dorset birding's Gandalf to my Peregrine Took - when I confessed this to him recently. He's got a point, but I'd like to think that bad luck, habitual over-sleeping and sheer incompetence have also played their part.

Anyway, as if to prove what a bogey bird this had become, I didn't even see my first Dorset Ring Ouzel - as the picture below shows, one was captured just in the frame when I took my initial very distant record shot of the Shrike. The one I actually saw came from a different angle a few minutes later. Doh!

The quay to happiness...

...is apparently not a 9 hour drive to Scotland but a walk to my local riverbank. I was getting so desperate for an October tick that I seriously considered heading off in the wee small hours to Kilminning for the Eastern Olivaceous Warbler this morning. In the end, I decided it was a bridge too far and had an early morning walk around nearby Durlston Country Park instead. Yesterday's record Linnet count and migrant Lesser Spot could not be matched today, though a couple of Brambling were good to hear. There was another one near Wareham Quay this afternoon. Also at the latter were some precocious corvids picking up scraps from the car park, and just a few yards further down river a showy Cetti's Warbler. Not an Eastern Olivaceous, I grant you, but an awful lot closer to home.
﻿ ﻿

The weather had been pretty horrendous this week but after several days in front of the laptop I was feeling intrepid and ready to face whatever Mother Nature had to throw at me. High tides and floods had reared their heads again and added a sense of danger to the great outdoors. So last evening I took a deep breath, donned waterproofs and braved what can only be described as, well, a 'light drizzle'.

As a result of the latest deluge, various pools around Swineham had merged into a big lake, and some of the footpaths were more like canals. Despite the frisson of peril, in truth the only thing I was in danger of losing was my wellies. The hoped for Hen Harriers and Merlins failed to materialise, and a couple of Marsh Harriers was about the best of it.


There seemed to be a lot more birds around compared to recent weeks though - thrushes filling the local churchyard, gulls spoilt for choice by the new wetland habitats springing up all over place and a lapwing flock in the harbour building up for the winter. So many birds in fact that it felt really promising for something rare. Unfortunately, none of the Thrushes were Dusky, the Lapwings weren't Sociable and the gulls certainly weren't Laughing.

Finally, a few images below to show how Wareham is preparing for Halloween: 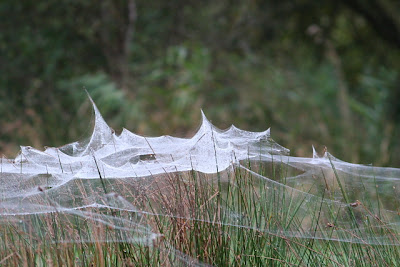 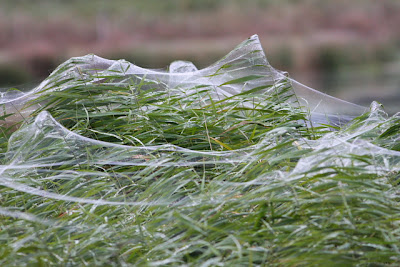 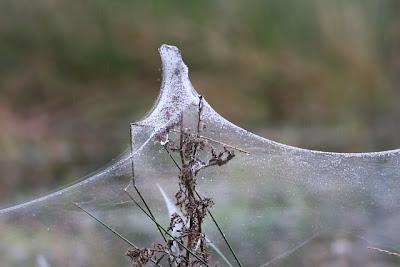 ...asked my co-dipper Jol Mitchell when he returned to find me in the car park at Radipole Lake photographing the long-staying drake Hooded Merganser yesterday. Well, they do say plastic takes ages to biodegrade.
﻿ ﻿
We had just given up on looking for a reported Blyth's Reed Warbler nearby, a potential tick for Jol and Dorset tick for me. During a fruitless search we could locate neither the bird nor a birder who had seen the bird - though we did catch up with local RSPB warden Luke Phillips who was on site when the bird was last reported but couldn't see anyone else there! It all started to sound a bit stringy, so we didn't persevere, figuring that the credit secured by an early return home might be needed later this month to pursue something more solid.

October is, of course, traditionally a time for raiding the brownie point jar in aid of twitching. Island-bound megas excluded, though, there haven't been that many accessible rarities worthy of a withdrawal so far. So a family day out seemed in order today, and took us back to Weymouh today for our first go on the town's new viewing tower. This giant doughnut on a stick rises 150 feet over the town to give extensive views of the Jurassic Coast. I must admit I've had more fun for £20, but the kids enjoyed it.

Then it was onwards to Portland Castle, where my hopes of finding good birds in the ornamental grounds came to nought, before ending the day near the Portland Heights Hotel where good behaviour earned me 30 minutes to look for a Yellow-browed Warbler seen there earlier. Though silent, it was easily located, but not so easily photographed. A pub meal on the way home was extracted by the family as the price of me trying, so as we approach the mid-point of the month, I find to my surprise that the brownie point jar positively overfloweth. Will I have cause for a raid before we head for St Mary's for half-term?

Purple, but not on the patch

Most of the trans-Atlantic vagrants are hitting the west coast of Ireland at the moment like bugs on a windscreen, and not getting any further. So a visitor from the continent, in the form of a Purple Heron at Weymouth's Radipole Lake, offered the prospect of a Dorset tick today. The bird was seen shortly before noon so we had a spot of lunch and set off, arriving at the Swannery car park just before 1400. The family went shopping, and I hit the reserve only to find that there was some aimless milling about going on, and different versions of where and when the Heron was last seen: the tell-tale signs of a dip waiting to happen.

I joined the aimless milling about, and, having a short attention span, stopped looking for the Heron briefly to photograph a Cetti's Warbler cussing at me from a hedgerow.

A couple of my friends have asked recently, 'does your wife read your blog?', concerned, I think, that I had revealed just a bit too much about some manipulative behaviour or other deployed to get out birding. So just to reassure them, the manipulation cuts both ways: knowing that I was pretty keen to see the Purple Heron, I got a phone call from my ever-tolerant wife after about an hour asking if I would mind if she bought an expensive dress. What could I say?

As it happens, I had already seen the bird by this point - a lumbering dark shape out of the corner of my eye at first, easily identifiable despite flying in the opposite direction. Fortunately the Heron then banked in the air and flew parallel to me long enough for a few record shots to be taken.

After another distant but extended flight view, it dropped out of view and was not seen again until dusk. By which point THAT dress was being flaunted in Poole on a girl's night out. I, on the other hand, was at home washing up, babysitting (or 'parenting' to give it its proper name) and re-stocking the brownie point jar ready for when those Belted Kingfishers and Myrtle Warblers decide they have had enough of Galway...
﻿
Posted by Peter Moore at 23:40 1 comment:

Bedraggled, and far from home

Despite being a former resident of Westminster, Southwark, Lambeth, Lewisham and Hillingdon, I've said before how I feel a bit out of place in the capital these days. Returning to a rainy London yesterday, it once again felt like a giant metaphor for how the whole species seems determined to accelerate its progress towards becoming a stain in the geological record.

This morning, for example, I noticed on the Jubilee Line that those cardboard adverts which used to climb the walls alongside the escalators have been replaced by banks of LCD screens. A waste of energy as well as being pointless - I went the whole length of one without being able to work out what I was being sold. And before someone points out that 'full life-cycle analysis suggests that the LCD adverts have a lower carbon footprint than the old ones', I'm having none of it. As the great Stewart Lee says 'You can prove anything with facts'.

The 100-yard, horizontal moving walkways in the bowels of Waterloo station represented a further waste of energy in a City with more than its fair share of the morbidly obese. Any species which requires a moving walkway, and, more to the point, a sign to tell it that 'The moving walkway is ending' at the end of the moving walkway, is surely over-due being re-lumped with its simian ancestors.

So what's this got to do with birds? Very little, to be honest. Apart from that the event I was attending was at Defra. When not culling it, they are in charge of the wildlife. The reception area was adorned with beautiful images from a wildlife photography exhibition. A civil servant met us to take us to the meeting room, and as we paused by the photos he said, wryly, 'you won't find any badgers on there...'

Despite this bit of dark humour, by the time I got home, I still felt about like this Buff-breasted Sandpiper looked when I twitched it on Tuesday after a work commitment in Yeovil put me within striking distance of a wet and windy Curry Moor: bedraggled, a bit dis-orientated but alive at least. As long-winded and tenuous links to unremarkable bird photos go, I think that was pretty impressive. So come on October, cheer me up with something proper rare... 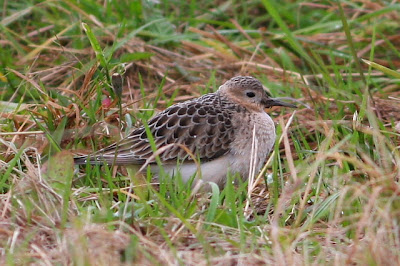