It was a bit of a Grey Sunday around Portland and Weymouth yesterday weather wise. Fortunately it was brightened up by some smart birds, the memory of which was enough to cheer me along on the way into work this morning on Blue Monday - the most depressing day of the year, apparently. As well as a handsome male Black Redstart at Chesil Cove, a female type was also present. A few pictures of this and some other highlights of the day below.
Posted by Peter Moore at 22:26 No comments:

A matter of opinion, obviously, but if there is a better looking bird in Dorset at the moment, I would like to see it. I set out hoping this cracking male Black Redstart would still be at Chesil Cove this morning, and while on arrival only a female was present, by the time I had walked a few hundred yards south under the west cliffs of Portland and back, he was feeding around, and at one point under, my car. I couldn't quite get the bird in shot with the old banger, but no matter. 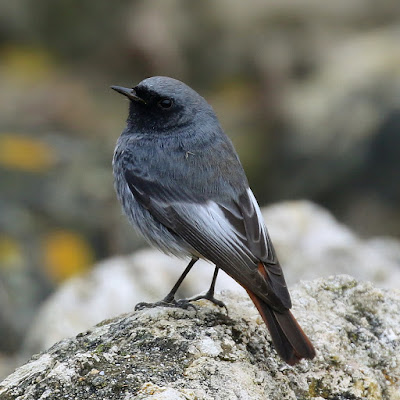 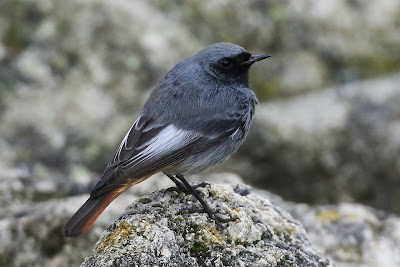 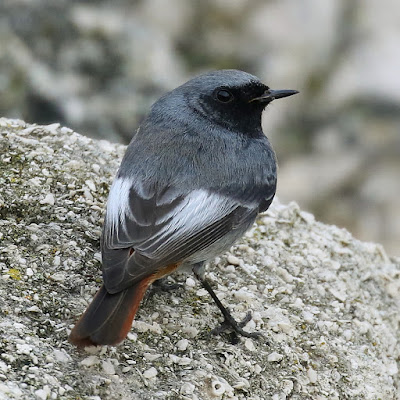 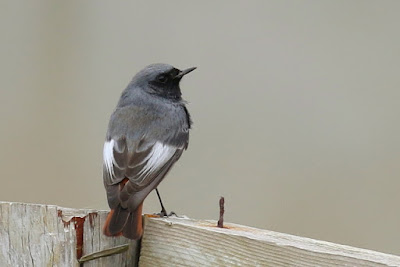 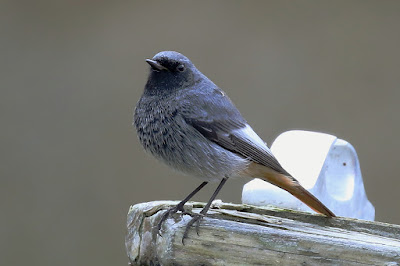 Time with the extended family

There are five species of 'true' tit on the Dorset list - Willow is sadly now lost to the County as a breeding bird, leaving Blue, Great, Coal and Marsh as the most likely to be seen these days. (Long-tailed, Bearded and Penduline Tit are all from closely related families, but are not considered 'true' tits). After Willow, Marsh Tit is the least likely of the 'true' tits to be encountered, but there are a few sites in Purbeck where they may come to feeders in winter, including Arne and, this winter, Corfe Castle. I popped along there yesterday, in the half-hour of daylight which remained after watching table-topping Wareham Rangers U-13s drop three points at home to the Parkstone Falcons. A result, since you ask, which leaves them just three points ahead of second-placed Swanage, who they play in their next fixture - making it a real six-pointer of a Purbeck derby. The light was going as I arrived, and had I known the boys were going to get mugged in a last minute counter-attack I might have invested the 60 minutes I spent before that, watching them spurn a hatful of chances, getting better photos of Marsh Tit!

Well my 2015 photo year list finally ended on 240 species, the final addition being some colourful Crossbills in Wareham Forest photographed on 29th December. While I never set a target exactly, I said earlier in the year that I would be disappointed not to get to 200 and delighted to get to 250; so just short of delighted will have to do. 250 was definitely within reach, but would have meant doing things like going to Hampshire for Ferruginous and Ring-necked Ducks, and to be honest I wasn't that committed! The real value of the exercise was undoubtedly the extra impetus it provided to get out and about, and it certainly helped achieve that when motivation was lacking.

The down side of the photo yearlist was the compulsion to post even lower quality pictures than normal, and I haven't exactly been too precious about photographic quality over the years! Even so, I don't think I'll try to repeat the exercise in 2016, and will try to raise the quality of the offerings above last year's level. Starting with a few subjects from the first days of 2016 around the north shore of Poole Harbour. In the effort to raise quality over quantity, some light would help, but there hasn't been much of that yet this year in Dorset, so high ISO ratings have had to come to the rescue.