Spring migrants continue to trickle in and while it's not quite a flood, it's a reasonably safe call to declare winter as being over. A few more highlights to look back on then:﻿

As the early spring migrants start to trickle in, it's time to look back at a few highlights of the winter. First up, some waterbirds and waders from around Dorset over the last few weeks.

I generally take a 'once bitten, twice shy' approach to twitching distant rarities, so having been in the right place at the wrong time on a trip to Yorkshire for a Pine Bunting in January, I had not intended to go back. Avid readers with long memories may recall that I spent several hours looking into a weedy field, one of the bird's two favoured haunts, before I moved to a muddy field, the second of its favoured haunts, at which point it appeared back in the weedy field! 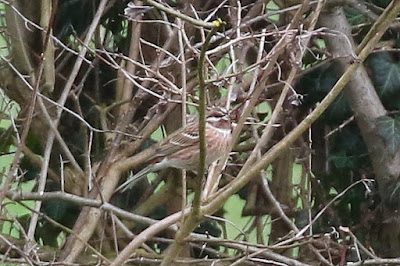 Despite pager reports to the contrary, it was not seen again that day suggesting that a bit of wishful thinking may have been involved in some sightings, and that the ease of seeing the bird could not necessarily be judged by the regularity of reports on the information services. As February progressed, however, reports of the bird appeared to become more regular, and good photographs appearing online suggested that it was showing much more frequently and reliably than on my first visit.

So when a text arrived late in the month from fellow father of two Paul Welling, sounding me out about sharing a lift to Yorkshire, I started to reconsider. Half a plan to go the weekend before last never came to fruition due to ill health on my part, but as last weekend approached and reports of the bird's presence continued to pop up with reassuring regularity, we resolved to go on Sunday. 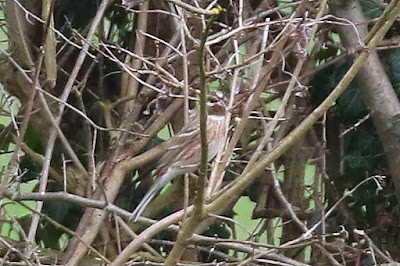 We arrived at Dunnington on the outskirts of York early on Sunday morning. The site directions for the bird suggested  that it might be in a different field to the one I became sick of the sight of that afternoon in January, but on arrival it was slightly depressing to realise that we would be looking at exactly the same field, just from the opposite end! Worse, we would now be looking into the rising sun, at least until the forecast rain set in mid-morning...

Undaunted, we joined three other birders who were already on site, set up our scopes and kept an eye on a seeded patch of bare earth where the Bunting had allegedly been showing in recent days. After not many minutes one of the birders immediately to my left picked up the Pine Bunting as it dropped from the hedge to feed on the ground, but before we could get onto it, it flew back into the hedge. Convinced it would only be a matter of time before it returned, we stayed fixed to the spot, eyes glued to the bare patch. 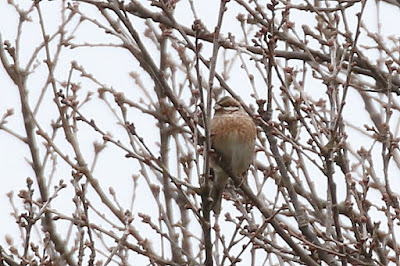 Over the next hour or so the crowd grew to about 30 people, scopes trained on the field and its surrounding hedgerows. As on my previous visit, Yellowhammers, Bramblings, Reed Buntings, Corn Bunting and Tree Sparrows came and went but no Pine Bunting. After a couple more hours, the landowner arrived, opened the gate and gave birders permission to walk down one edge of the weedy field, on the opposite side to the hedgerow in which the birds were perching between feeding forays. This afforded a much better view of the hedgerow, and when we eventually joined others at the edge of the field, while we still couldn't see the Pine Bunting, there were at least more birds on view for us to grill in the hope of picking it out. 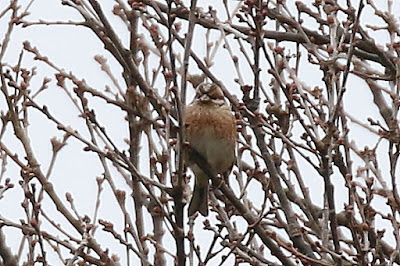 While there was still a whole afternoon of daylight left, we had not envisaged sticking it out until dark, assuming that if the bird was present we would see it within a couple of hours. It turned out that the half-dozen reports from the previous day were not evidence that the bird was frequently on view as we had assumed, but a pretty accurate record of the entirety of its appearances that day! 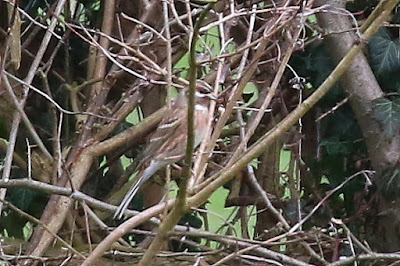 Although we hadn't explicitly discussed a deadline after which to head south, if we were to get back in time to gather the sand, soda ash, limestone, furnace and glass-blower necessary to fashion a couple of new brownie-point jars for our return home, we would really need to be on the road by noon. With an hour to go to this notional cut-off point there was still no sign, and as the heavens opened, the crowd had dwindled to just five of us. As the clock ticked, and fewer and fewer eyes searched for the bird, I was reminded of the wisdom of the 'once bitten, twice shy' policy. 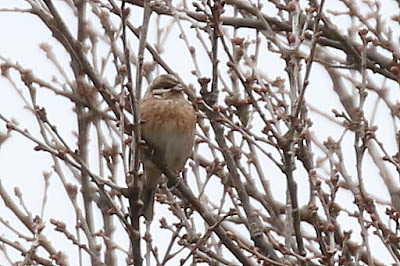 Just when it looked like this Bunting twitch was going a bit Cretzschmar's, I forlornly scanned the tops of some small trees in the hedgerow opposite and saw the unmistakable face pattern of a male Pine Bunting. No sooner than I had called it, it took off and the best I could do get others onto it was to urge them to follow the bird in flight. Those who did said that they couldn't see it well enough to identify, but they were able to confirm that the flying bird had unfortunately turned and flown away from us. And so the nightmare scenario for any carload of twitchers had unfolded: I had seen the bird but my travelling companion hadn't. 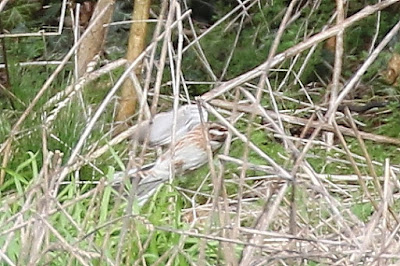 I discussed with Paul whether I should check out the Pine Bunting's other favourite haunt while he continued to stake out the weedy field. I was convinced that now that I had seen it, with the pressure off I would be able to pick it up again more readily - one of the birding equivalents of sod's law. But Paul persuaded me to stay put - a good call as not many minutes later, I found the Pine Bunting again in the outer branches of a large oak tree which sat prominently in the hedgerow, conveniently perched between two Yellowhammers. This time it stayed put long enough for all five of us to get telescopes onto it and enjoy excellent views. I even had time to fiddle with my camera's exposure and grab a few record shots.

Over the next hour the Pine Bunting dropped down to feed in the field, perching up in the hedgerow on and off as a steady stream of birders who had been on site earlier returned, having retraced their steps up the motorway network as news of our sightings reached them. After a few more views and pictures we were heading south before 'high noon'. A triumphant rematch, and another fun day out with a fellow dad.
Posted by Peter Moore at 22:22 No comments: