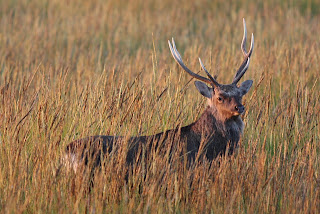 Quality rather than quantity was order of the day at Middlebere tonight, with a single Curlew Sandpiper and Spotted Redshank among the more numerous Black-tailed Godwit. Yellow-legged Gull was also present, and this fine Sika stag entertained us with a regal walk in front of the hide and effortless leap over the fence. 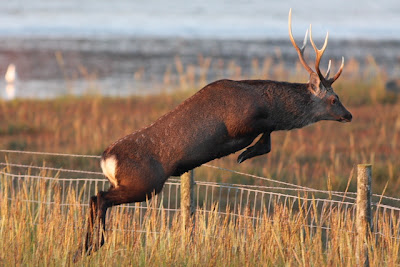 I had not seen Sabine's Gull in juvenile plumage before the recent influx, but the two at Sturt Pond near Milford-on-Sea brought the total I have now seen to five. They had been commuting between the Pond and some nearby fields - commuting in the opposite direction to me as it turned out, as I only caught up with them after two visits to the fields and two to the pond. Noticeably smaller than Black-headed Gull, as these pictures show, both birds were present, washing and preening for a few minutes before heading off back to the fields. 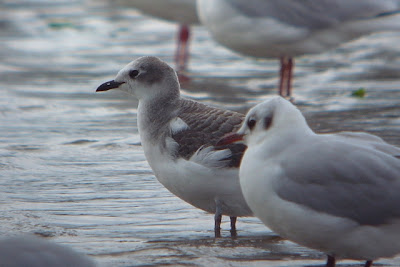 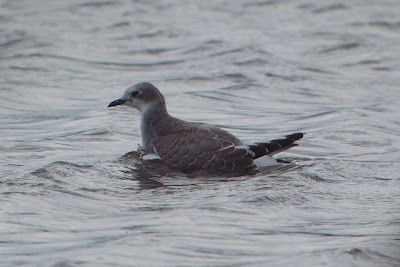 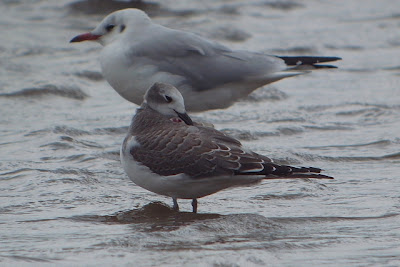 Apologies for the awful pun, but these approachable Knot at Cut Bridge were inviting to be photographed. With my 400mm lens still at the Doctors I had to make do with digi-scoping. 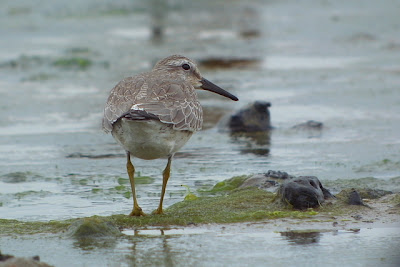 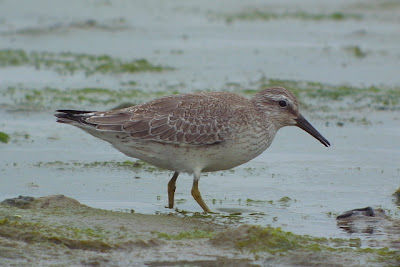 A few hours free this morning so I thought I would head to Milford-on-Sea to see the Sabine's Gulls which have been there for a few days. The pager reported a Semipalmated Sandpiper at Pennington Marshes en route so I thought I would check that out first. A breezy 30 minute walk later from Keyhaven and the Sandpiper was seen walking around the back of the Shoveler Pools. Eventually it came quite close - a good job too, as this is one tiny bird, smaller even than the juvenile Little Stint with which it occasionally crossed paths. Its feet were usually too covered in mud to see the partial webbing between the toes which give it its name, but occasionally when it was walking through water you could just about convince yourself they were there (see bottom picture).
﻿﻿﻿﻿﻿
﻿ ﻿﻿﻿﻿﻿﻿﻿﻿﻿ 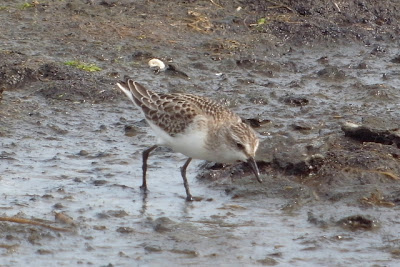 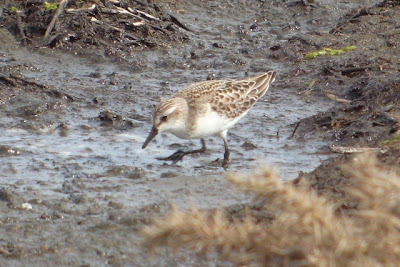 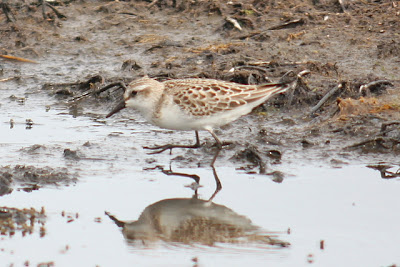 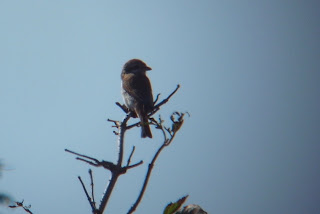 An old friend from work was staying in Axminster for the weekend so we agreed to meet halfway-ish in Weymouth this morning. Just after we arrived a Red-backed Shrike was found and we soon caught up with it. There are some great pictures of this bird around, but mine aren't among them - to call this a record shot is an insult to record shots! Bearded Tits and Yellow Wagtails were also seen and heard on the reserve, along with a small selection of waders - 2 Common Sandpiper, Dunlin, Greenshank, Redshank, Black-tailed Godwit and Lapwing.
Posted by Peter Moore at 03:00 No comments:

﻿ ﻿﻿﻿﻿﻿﻿﻿﻿﻿﻿﻿﻿Having gone to see a Lapland Bunting at Abbotsbury after work on Monday, and two Buff-Breasted Sandpipers near White Nothe after work on Tuesday I was a bit concerned that if I went to Mudeford tonight the rest of the family might have a sense of humour failure. So I took them with me. The boys and their mum played on the beach while I photographed two juvenile Sabine's Gulls, a Little Gull and a Grey Phalarope in the surf just yards from the shore, and all in the same small patch of water. The tall trees behind Avon Beach were casting a long shadow and my lens was struggling with the low light so I headed further up the beach to a sunlit area in the direction where one of the Sabine's Gull's had headed. I was pleased to find it standing on the beach, allowing a close approach.
﻿﻿﻿﻿
﻿
﻿
﻿ ﻿
Posted by Peter Moore at 22:15 No comments:

News of a Buff-breasted Sandpiper on Brownsea yesterday arrived too late in the day to attempt to see it, so a second chance to see two near White Nothe after work tonight was not to be missed. I approached from the east, a bracing yomp over a mile-and-a-half of fields, walking into the wind and dodging some frisky fresians in the process. My efforts were rewarded though as the birds were still present - distantly digiscopable in fading light. It was dark by the time I got back to the car - but I was happy with this latest addition to my Dorset list.
Posted by Peter Moore at 03:00 No comments: 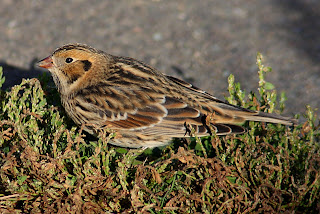 A Lapland Bunting near Abbotsbury Beach Car Park was reportedly very tame so I headed down after work to take a look. The wind was still whipping across Chesil Bank but the light was superb. I caught up with a couple ahead of me who were unable to find the bird, and we met two guys who had also had no luck. A couple coming the other way had also decided to give up, so it didn't look good. I continued to walk slowly up and down the road and eventually the bunting almost walked out from under my feet. I was able to attract the attention of the two guys and the first couple eventually returned to enjoy excellent views as it fed in the middle of the road. With the bird this close, even my old Tamron 200-400mm lens couldn't fail to get half-decent pictures. 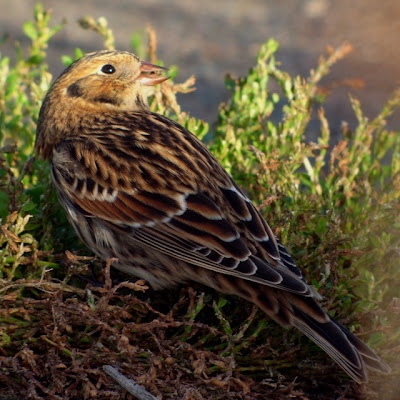 Swineham Gravel Pits is within walking distance of my new house in Wareham. I found a Little Gull and Black Tern there on Friday night, but with no camera I returned on Saturday to see if they were still around. The Little Gull was but there was no sign of the Tern. Today, however, a Black Tern was present again, and the Little Gull had been joined by a second, plus two Arctic Tern.
My 400mm lens is being repaired, so these pictures were taken with the DSLR attached to a telescope via an adaptor which turns it into the equivalent of an 800mm lens. Not easy with no autofocus and in blustery weather! Pictures from top: Black Tern, Little Gull, Arctic Tern.
Posted by Peter Moore at 21:45 No comments: