It's been a week of head-scratching and furrowed brows - yellow brows, specifically - looking for rare Phylloscopus warblers - ultimately successful in terms of seeing them, but a bit frustrating trying to photograph them! A report of a possible Hume's Yellow-browed Warbler in Weymouth yesterday, the rarer of a species pair with Yellow-browed Warbler, saw me heading there late morning. By the time I arrived the bird had already been identified as the commoner of the two by finder Joe Stockwell. A Hume's would have attracted considerable interest, but with so many Yellow-broweds around this autumn, no-one else seemed to have followed up the sighting. With no bird and no birders present, therefore, all I had to do was find it.
I wandered up the Rodwell Trail, a wonderful green lung of Sycamores, sallows and brambles running through suburban Weymouth, and eventually heard the Yellow-browed calling about 100 yards from the original sighting. It had taken the best part of an hour to see it, and it took another couple to get some record shots for the photo yearlist.
Today seemed like a case of Groundhog Day, with another late morning report of a Hume's at Durlston, scene of my mad dash for a Pallas's Warbler earlier in the week. The Hume's had been discovered by the finder of the Pallas's, Warren Clayton, clearly on a roll - or perhaps eating a roll as he was enjoying refreshments from Durlston Castle's restaurant balcony when he heard an unfamiliar call coming from the trees below.
I arrived at Durlston around midday to join Warren and Steve Smith looking forlornly down into a large area of trees and scrub which offered plenty of hiding places for a tiny central Asian vagrant. With no sign or sound of the bird for over an hour we feared for the worst, but a faint call encouraged us to stick around. The calls became more frequent and strident - certainly more strident and lower pitched than the Yellow-browed I was hearing the previous day - and after the best part of 3 hours we got our first view of a small pale bird flitting distantly through the vegetation. A short while later a more extended view provided a brief window of opportunity to get some record shots, enough at least to confirm the key features.
﻿
So while my week off has hardly been rarity-packed, seeing Pallas's, Yellow-browed and Hume's Yellow-browed Warblers in consecutive days is certainly not to be sniffed at. Finding them would have been even better - so well done Warren and Joe.

Purbeck's Winspit Valley held two Pallas's Warblers yesterday so I headed there when the rain stopped this morning. I had barely left the village and started down the footpath to the valley when the bright yellow rump of a Pallas's Warbler buzzed down the track in front of me and ducked into the hedge. This was no doubt the same bird as that found yesterday by Andrew Lawson, brother of fellow Swineham regular Marcus. Down at the bottom end of the valley I could find nothing rarer than a Firecrest and a few Blackcaps, but with large numbers of Goldcrests present, the valley held a sense of promise at least.

A tale of two castles today - Durlston and Portland - and two Palaces - or should I say Pallas's. Pallas's Warbler that is, a delightful, rare beast from the east which brightens up late autumn birding in Britain. The day started with a report of one at Durlston, so I headed there unshaven and breathless in the hope of catching up with it. Walking slowly up the hedgerow it was seen in, I was joined by finder Warren Clayton who re-found it after a short while. I grabbed some photos, we watched it for less than a minute, heard it call a few times and then it was gone. A good start to the day.

The rest of the family fancied a trip to the Weymouth Sealife Centre this afternoon to make the most of their annual passes. Due to a tragic procurement oversight, I don't have one, so was 'forced' to stay outside and do a bit of birding in the local area. I headed to the second castle of the day, Portland Castle, where my English Heritage membership card gives me free entry to the gardens which serve as an excellent migrant trap at the base of the Isle of Portland.
Just as I was preparing to head back to the Sealife Centre, another Pallas's Warbler was reported at Southwell - in a brief visit, I could do no more than catch a glimpse of a snowy white underside in deep cover. It turned out this was one of a small influx of the Asian migrant into Dorset today with at least four birds seen.﻿
Posted by Peter Moore at 22:04 No comments:

It's half-term so I've been visiting old friends. First up was Swineham, with whom I was pleased to reacquaint myself after a lengthy absence. Next came a trip to Lyme Regis to see my two godsons and their parents, old college friends.
We took a walk along the impressive new coastal defences to the east of the town before climbing up the hill to watch the first half of Lyme Regis v Cullompton Town. The new sea wall appears to have come a bit late for Lyme FC, as the pitch slopes perilously seawards a couple of yards in from the touchline. The players had enough trouble controlling the ball without that to deal with: the match would best be described as a perfectly good game of running around spoilt by very occasional outbreaks of football.
Monday saw us heading from one World Heritage Site, the Jurassic Coast, to another, the City of Bath, to meet up with a friend visiting from Australia, at a gathering which my god-daughter also attended. With all three godchildren thus met in the space of a few days, and their annual dose of spiritual guidance administered, it was time for some birding today.
In previous years, the last week of October has given me the chance to see some pretty good birds: Eastern Crowned Warbler (2014), Hermit Thrush (2013), Stejneger's Stonechat (2012), and Steppe Grey Shrike (2011) to name a few. There's been nothing quite so exotic within reasonable striking distance so far this week, so I returned to my checklist to see what still needed snapping for the photo yearlist.
Turns out that Common Scoter and Oystercatcher were still on the wanted list, so I headed to Holes Bay where two of the former have spent the last few days. The Scoter, both drakes, were a good distance out at first but came a little closer in poor light. Oystercatcher was always going to be easy, though I'm not quite sure how I've managed to miss them so far this year. Hopefully there are a few more easy ones to dig out before the list grinds to a halt for the year.

Sandwiched between close encounters with a Red-backed Shrike, I spent yesterday afternoon on Portland looking for owls. I would say 'owling' but, according to the trusty Urban Dictionary, rather than 'looking for owls', this apparently now means perching owl-like on a variety of objects and photographing one's self before tweeting (hooting, surely?) the results out on the internet. Kids today.

Short-eared Owls had been coming in off the sea all weekend and while I was unable to stay 'til dusk, which would have provided the best chance of seeing multiple birds hunting and going to roost, I was reasonably confident about seeing one as they are the most likely owl to be seen flying in the daytime. In the end I saw just one, flushed from a field edge as I walked along the west cliffs - it flew directly away and dropped out of sight so I was only able to get a rear view record shot. Frustrating, but they all count for the photo yearlist. Much more compliant were the Portland Bill Little Owls, catching some rays in the afternoon sun. Also the first time I have photographed this species in 2015.

Baled out by the RBS

On Wednesday, my trusty 400mm lens was pointing at an exquisite Wilson's Warbler on the Isle of Lewis. Unfortunately, I wasn't behind it, as I had lent it to my butter-fingered friend Steve Smith, who dropped his a few weeks ago. Greater love hath no man than this: that he lend out his lens for his friend's lifer. 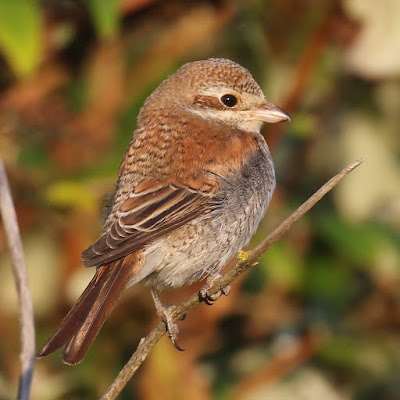 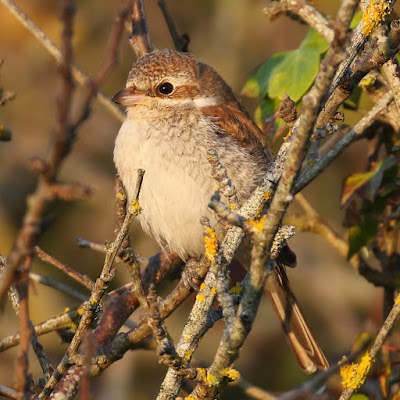 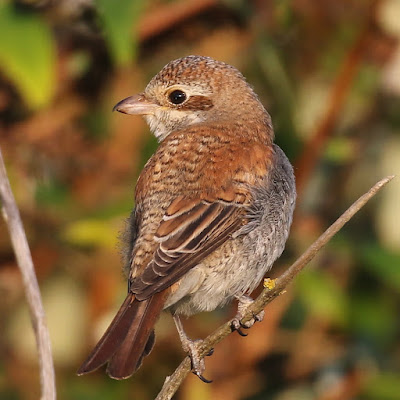 Those birders who weren't en route or on the way back from Lewis all seemed to be heading to Norfolk for the weekend, where a feast of eastern rarities was on offer. I was unable to join them either due to domestic commitments, so by this morning I was going pretty stir crazy in sleepy Dorset. There was nothing for it but to make myself 'unavailable for selection' in the Wareham Rangers under-13s parental fan club, opting for a day's birding instead. 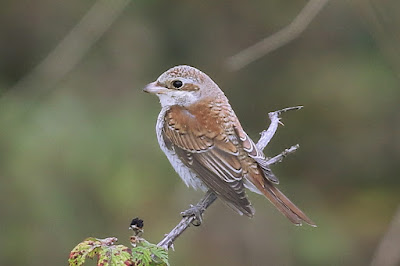 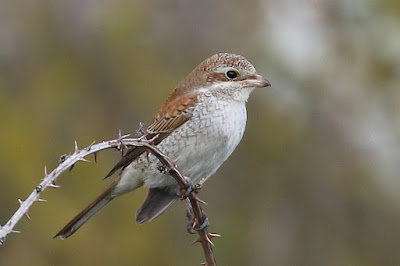 A morning spent around Purbeck was pretty unsuccessful, bird-wise, so it was looking like it might be a pretty bleak weekend all in all. Then, remembering that Portland was chock full of Short-eared Owls, and that I have yet to photograph that species in 2015, I turned tail and headed there for the afternoon. Before I got to the Bill, however, news came through of a Red-backed Shrike at Suckthumb Quarry, reappearing in that location after a three day absence. I was minutes away so detoured there instead. 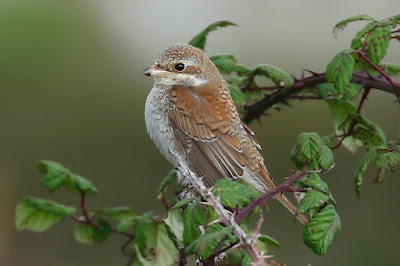 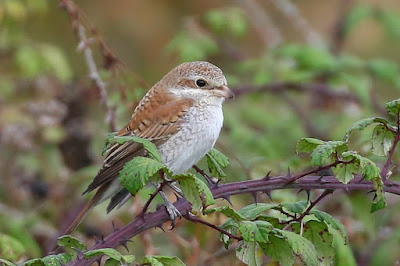 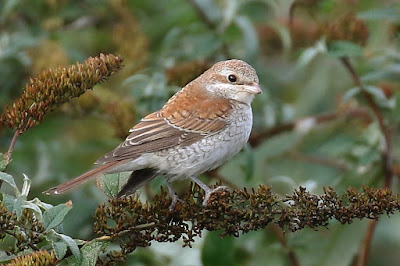 There are two main types of shrike - flighty shrikes, or approachable shrikes. Fortunately, this was one of the latter. I grabbed a few shots, scooted off on an owl hunt (more on that later) and went back for more when the late afternoon sun came out. A wonderfully confiding little bird, it was a real tonic to spend some time with it - and about time RBS saved the day. #227 on the photo year list. 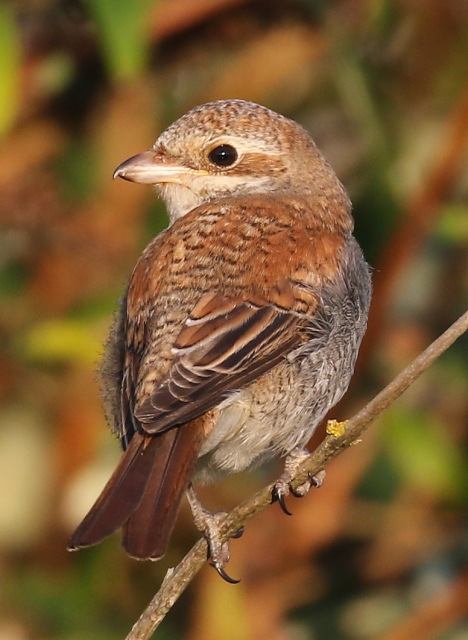