Our recent half-term whistle stop tour of Cornwall saw me squeeze in some birding between visiting my god-daughter in Bodmin and friends in Falmouth, admiring the excellent National Maritime Museum at the latter among various other sights the county has to offer. One of the highlights was checking out a huge flock of gulls following the tractors of Polgigga as they made busy in the potato fields. Up to four Iceland Gulls had been reported in the area so I thought it would be a banker, but while I only caught up with one, at least it treated me to a close fly-past.
It wasn't all as successful though. While at Bodmin, I nipped out to Dozmary Pool to see what I thought would be another banker - the long-staying, oft-returning drake Lesser Scaup. As you can see from the picture below, I couldn't see the pool, let alone the Lesser Scaup. A two hour wait by a hedge in the Nanjizal Valley looking for a Little Bunting was similarly unsuccessful, though at least there was no fog. Passing Choughs, a stunning male Hen Harrier and my first butterfly of 2017 - a Red Admiral - kept me entertained as I waited.
A bit of a rematch with another banker, the Hudsonian Whimbrel at Boat Cove, was successful, though it wasn't as close as on my visit this time last year. A few other waders were on the beach along with the mobile Whimbrel - soon to be downgraded from full species status as a result of changes to the British list.
On the way home, after a bit of luck seeing an American Wigeon at Exminster without too much searching, there was just to time to take a short detour to look for a Little Bunting near Axminster. A couple of locals were looking for the Bunting when I arrived, and although it had been seen not long before, tales of them multiple dipping on this elusive bird did not leave me feeling very hopeful. The light was also fading, but with the rest of the family playing games on a variety of mobile devices in the car, I thought I would give it the last hour of daylight. After just half of this, a flock of previously unseen Reed Buntings flew up from the long grass, and as they alighted in the trees around me, one gave the distinctive ticking call of a Little Bunting. While it didn't exactly pose for a photo, I managed a couple of shots of it partially obscured by vegetation to cap off a good trip.

A rare experience today seeing a Humpback Whale just 100 yards or so off an English shoreline - so lost for words I couldn't even summon up a bad whale pun for the title of this post. Thank to Steve Smith for the lift and the rugby referee style loud blast of the whistle when first relocating it off Blackpool Sands.

A tale of two estuaries

A short break with the family over half-term in Cornwall gave me the chance to catch up with two species of American duck, both relatively rare on these shores. First on the Hayle, a Green-winged Teal, the American cousin of our Eurasian Teal. We were staying in Hayle, so I nipped out before breakfast to look for it. There are usually plenty of Teal to sift through out in the channel viewable from the causeway over the head of the estuary but on arrival I could see just half a dozen. To my surprise, the Green-winged was one of them and it fed quite close in the shallows on a rising tide.
My second American duck of the trip was seen on the way home - an American Wigeon at Exminster Marshes, at the top of the Exe Estuary and just a few miles detour from our route home up the M5. Several large Wigeon flocks were evident on arrival - a slightly daunting prospect to search through them all - but a tip-off from a local birder who was just leaving suggested the bird I was looking for might be in one of the closer flocks. And so it was, picked up with just about my first scan of the bins.

I made the trip to Thurlestone Bay in Devon last November with my friend Trevor to see my first male Desert Wheatear in Britain. The bird was a bit bedraggled that day, so as I was heading to Cornwall with the family for a few days over February half-term, we took the southerly route along the A38 putting me within striking distance of this attractive rarity again. 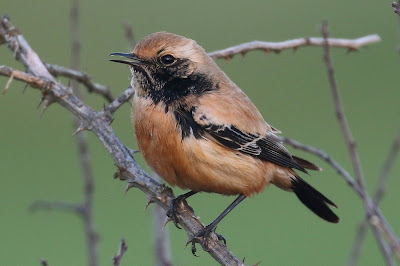 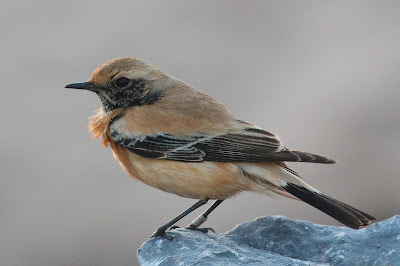 On arrival at Leasefoot Beach, the Desert Wheatear was not present - a bit of a worry as it had been consistently there for several months, even returning after a short absence when it seemed to take a dislike to being trapped and ringed. I stuck around admiring the folded geology at each end of the sandy beach, and on returning to the base of the dunes was pleased to find the Wheatear catching the last rays of sun. When flushed by a dog it vanished over the dunes and I refound it perched on the roof of a small shed belonging to the local golf course. Away from the crashing surf I could hear its quiet sub-song - a scratchy warble mingled with a bit of melody - a real treat to hear this in the UK. 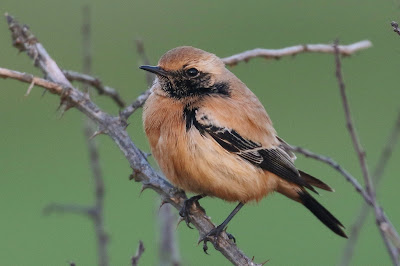 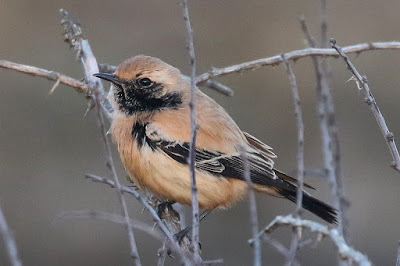 The Wheatear then perched up on some scrub at the edge of the golf course and continued to sing - I got some decent pictures of it with one of the greens as a backdrop, a pleasing contrast and a change from the classic views of it on the sandy beach which have littered the internet in recent months! It won't be long before the Desert Wheatear's northern cousins are arriving on spring migration - there must be a good chance of seeing both species together on Leasefoot Beach before the Desert Wheatear moves on. 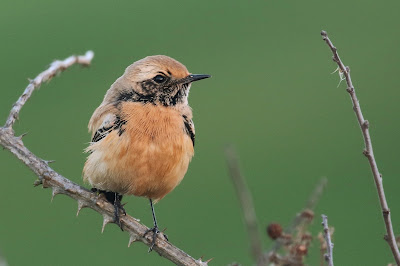 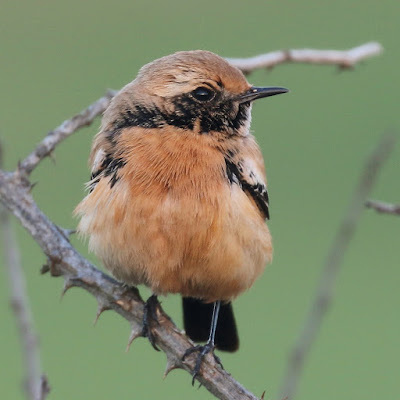 Almost forgot about these, languishing in a dusty corner of the hard drive labelled 'January'. Some cracking waders from around Poole Harbour last month.