Warmth, sleep and a dishwasher - is that too much to ask? Apparently so, as this summer's family holiday involved camping in Norfolk. I am in a minority of one in said family for thinking that the novelty of being under canvas is outweighed by the hassle and inconvenience of it all. Bear in mind that most of the rest of the world only lives in tents when forced to by natural disasters and you can see my point.

A decade or so of twitching has taught me to tolerate the cold and sleep deprivation to a certain extent, though on a camping holiday the two things are of course extended over a whole week. When not being woken by the low temperatures or a weak bladder, there were dogs, over-excited children and drunken adults to prevent any attempt at getting some shut-eye. We were pitched next to a particularly nasty-looking pair of German Shepherds (dogs, that is, not Teutonic herdsmen). They were, their owner explained when they went for one of the children, 'only trying to be friendly'. As Goebbels said when Hitler annexed the Sudentenland: 'nichts dagegen ihn, er will nur hallo sagen' (translation: 'don't mind him, he just wants to say 'hello''!).

Fortunately, the campsite was within easy reach of North Norfolk's string of top quality nature reserves. To Titchwell today, then, with the camera, count to ten and, relax....

Living in Dorset guarantees a steady stream of visitors, particularly during the summer months. These provide an excuse, as if one were needed, to visit some of Purbeck's more well-visited but still special sites. Durlston and Arne were today's choices.

First good bird of the day at Durlston was a Spotted Flycatcher but migrants were generally thin on the ground.

Fulmars and a young Peregrine gave a flypast but we missed a pod of Bottle-nosed Dolphin which were seen by one of the rangers.

Arne was also pretty quiet, though a Whinchat was a good find and another sign of autumn approaching.


Today's visitor, Auntie Rosy, had never seen a Dartford Warbler, and I was pretty confident we could remedy that. However, despite hearing one at Durlston, we didn't see it and also managed to draw a blank at Arne. Although numbers are down in Dorset due to recent harsh winters, dipping this was still quite an achievement in one of their strongholds.

The flooded field on my local patch continues to turn up some nice birds - single Common and Green Sandpipers this morning on top of a Wood Sand earlier in this month. The Collins Guide puts all three on the same page along with one other species - Terek Sandpiper. I think I'd settle for that if it turned up to complete the set...


Among a small flock of Black-tailed Godwits was a colour-ringed bird which I first saw on 2nd August, and which appeared to be sporting an aerial, presumably attached to some kind of satellite tracking device. I've emailed the details off so news of its provenance is awaited. Earlier colour-ringed Blackwits from this site haven't come far though - Farlington in Hampshire was the origin of the last one I saw here.


The warm morning also brought out some Odonata - I'm no expert but looking at the field guide I think this morning's dragons included Southern Hawker, an immature male Migrant Hawker and a male Common Darter.

They think it's all over...

...and it is now. The London Olympics, that is. Celebrity bloggers like Jonathan Lethbridge had a bit of a downer on it all at first, in his case based on perhaps understandable concern about having Surface-to-Air Missiles pointed at his patch. Mind you, Weymouth and Portland birders have had whole Royal Navy destroyers pointing at theirs during the sailing events, and I haven't heard them complaining. Which other Dorset birders will tell you is quite unusual.

Personally though I've loved it. I don't think there is a sport I haven't watched, and I'm a terrible purist normally. Whether it was Gong the Chinese lady shot-putter, whose blood curdling screams made the Wimbledon grunters sound like pussy cats, overgrown kids falling off their BMXs or Belarussian rhythmic gymnasts who could teach Team GB's footballers a thing or two about ball control, I've lapped it all up.

The children and their mum were away for most of the fortnight, so I was a bit worried that they were running around their campsite, jumping over climbing frames and cycling around the countryside when they could have been at home being inspired to lead a healthier life on the sofa with me, and my takeaways. On the up side, with them away I got to watch way more sport on TV than normal, and squeeze in more visits to the local patch than would otherwise have been the case. In fact, that was the only real problem I encountered over the whole two weeks - choosing between sport and birding every week night when neither is usually an option. The almost complete absence of pretty pictures from this post is a clue to which option generally won...

There were other minor niggles of course. In the case of London 2012 it was probably overuse of the phrase 'inspire a generation' by media types trying to sound profound when they had nothing particularly profound to say. That was going to be it on the negative side until, as I was writing this, the camera zoomed in on the cream of British politics dancing to the cream of British music, the Spice Girls, during the closing ceremony. Now, Jonathan, do you see how those Surface-to-Air Missiles might have their uses?
﻿﻿﻿

There was a bloke on the radio this morning who was given a prison sentence for looting in last summer's riots. To be fair, he wasn't complaining and took his time in stir on the chin, but I was a bit disturbed when they said that his booty was a four-pack of Kestrel Super lager. Disturbed not by the harshness of the criminal justice system, I should add, but by the lack of aspiration in the choice of tipple shown by the criminal.  Rated only 7/10 on a review website for 'tramp juice' (it's true, google it), 40-something readers may remember rejecting this stuff at teenage house parties on the basis that drinking Toilet Duck would do them less damage.


Back in bird-world, meanwhile, the other kind of Kestrels have been causing havoc with Dorset's breeding terns. Not content with attacking the Little Terns on Chesil Beach, they have also been blamed for some of the predation of the tern nests on Brownsea. A bigger culprit this year, however, has apparently been the local Yellow-legged Gulls, but we can't really shoot them on account of them being one of the county's rarest breeding birds. Tough on the terns though, who have faced trampling by deer, bad weather and other predators in recent years. At least the Sandwich Terns sound like they got a few chicks away this year, but the Commons have apparently taken a bit of a battering. Let's hope they bounce back next year.

...and auto-mobilesfocus were the theme of this weekend. With the family still away on holiday the world was my lobster, or at least those parts of it which could be reached without a car. Fortunately there are plenty of options locally so I took a train from Wareham to Poole, and got the first boat of the morning to the photographer's paradise of Brownsea Island. There was no sign of a White-Rumped Sandpiper reported earlier in the week but plenty of other waders including singles of Little Ringed Plover, Knot, Spotted Redshank and Avocet among the more numerous Blackwits, Oystercatchers, Ringed Plover, Curlew, Greenshank and Dunlin. Most confiding though were a couple of Common Sandpiper which flew into one of the tern islands in front of the Macdonald hide.

...at Swineham on Friday evening. In fact most of the waders from earlier in the week had cleared out leaving insects and mammals to provide the photographic interest. Best of all were a pair of Common Seals hauled out on the mud at Swineham Point - at least 5 miles from the open sea.

With the family away on a camping trip, I've been free to nip out birding in the evenings after work this week. Unfortunately this rare opportunity has coincided with an even rarer one in the form of the Olympics, and I think I clocked a personal best on the round trip to Swineham gravel pits to get back in time for the evening's TV coverage.

A Wood Sandpiper present on Tuesday was still there but had been joined by a Little Gull, and a small flock of 13 Black-tailed Godwits grew to over 240 during the next hour of an incoming tide in Poole Harbour. Not bad for a flooded field that shouldn't even be flooded at this time of year.
Earlier in the week I flushed a Kingfisher from a wooden pier on the River Frome so I approached the same spot carefully this evening and - bingo. Usually they see you before you see them but this one cocked it's head at me and allowed me to reel off a few shots before heading down river.

﻿ When I wrote this post in April I thought I knew what heavy rain was. That was before the events of early July which saw the winter flood meadows around my local gravel pits at Swineham became summer floods.

One flooded field near the pits has looked good for waders for several weeks, but there haven't been any. That all changed last night when over 150 of 5 species turned up - the great majority Black-tailed Godwits, many still in smart summer plumage, but also 7 Snipe and singles of Greenshank and Lapwing.

Star of the show though was a single Wood Sandpiper, which showed distantly at first but was feeding actively and eventually came quite close. If the White-rumped Sandpiper present on Brownsea today sticks until Saturday it could be a good wader week in Poole Harbour... 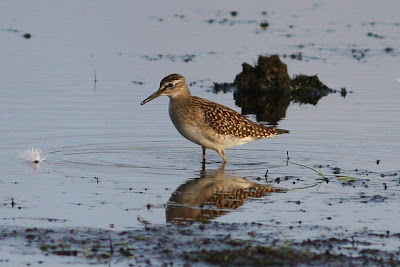 A couple of Common Gulls were also good to see. I could have stayed longer, but for the second time in as many weeks biting insects forced me to retire early having lost several pounds of flesh to their unwelcome attentions. 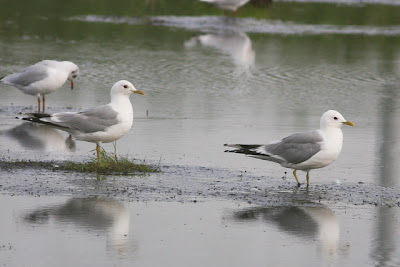