My 7 year old son loves to play games on long car journeys. Unfortunately, in the last few years he has also developed the need for a sick bag to be on hand during the same. Sitting him in his car seat in the front seems to be the best cure for the travel sickness, so instead of arguing with his mum about directions whilst I drive, long journeys now involve he and I keeping each other occupied with various competitive challenges.
There's the obvious stuff like I-spy, then trickier games like the Red Kite game (who can see the most Red Kites first. Best played on the Winchester-Oxford stretch of the A34. Rubbish on the A31 through Dorset) and Car Cricket (choose a colour, then every car that goes in the opposite direction of that colour scores a run; four for a van, and six for a lorry. First to 100 wins. Or 50 if the traffic's quiet). When done with these, there's usually time for a round of Cheese-on-Wheels*.﻿

Tiring swiftly of this, I encouraged him to switch to the 'I want to know if you know' questions, not quite sure what to expect. This is what I got:

And so it went on. I should have quit while I was ahead.
﻿

* The rules of Cheese-on-Wheels are too complex to explain here, but if you really want to know, ask any 7 year old, or email the Secretary of the Dorset Bird Club. He's a dab hand and thrashed me last time we played it on a twitch.
Posted by Peter Moore at 21:39 1 comment:

...in a land Farne, Farne away. Seems like years since my trip to the Farne Islands, so I thought I should upload a few photos before they start smelling. Speaking of which, just looking at these pictures again fills my nostrils with the hum of the guano-covered cliffs. An essential part of the experience, not an entirely unpleasant smell, but probably not going to be released as a fragrance by 'Lynx' any time soon. Anyway, auks, particularly young ones, are the stars of this post. Just one youngster each of Puffin and Guillemot were seen, but I had never seen either species at such an early stage of development before so that was a treat in itself.
﻿
﻿
Posted by Peter Moore at 20:41 No comments:

Before the Bridled Tern provided a rousing finale to a weekend on the Farne Islands earlier this month, I had plenty of time to photograph the raucous and aggressive Arctic Terns which breed there colonially:

A late afternoon walk on the Purbeck coast today was rewarded handsomely with a very rare - and beautiful - aberrant form of Painted Lady, known as Rogeri. Thanks Mike Gibbons for help with the ID - not for the first time this year I was floundering! Regular Painted Ladies were also on the wing - see final photo for comparison. 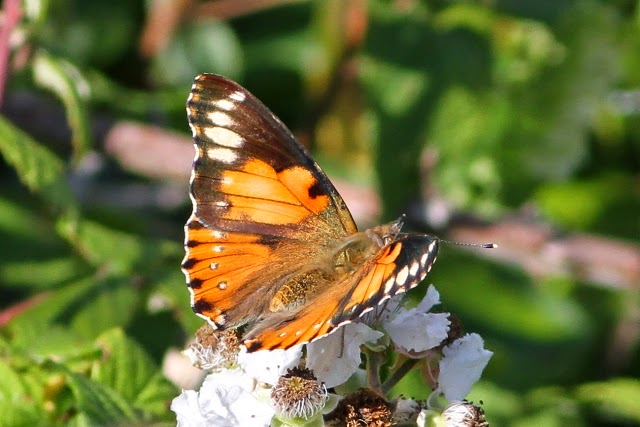 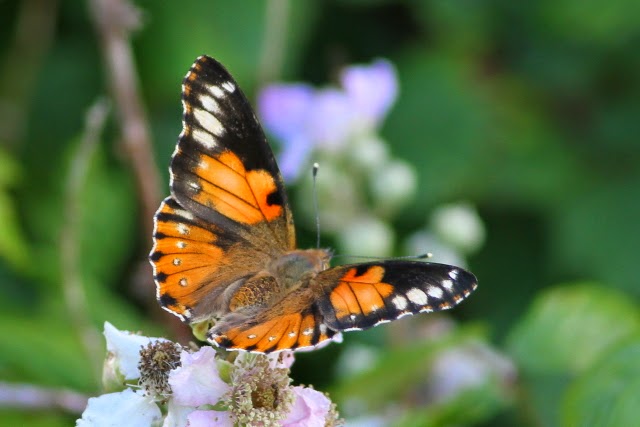 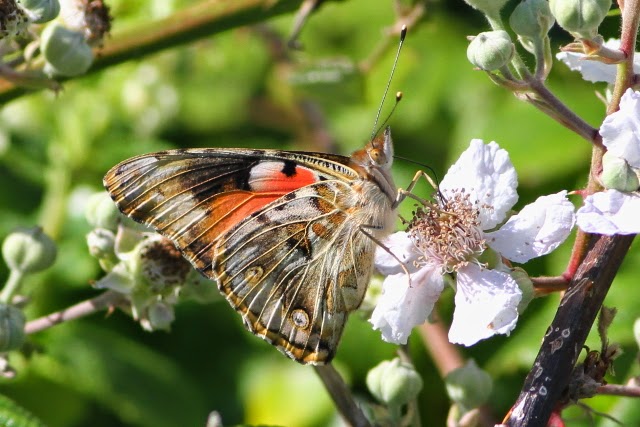 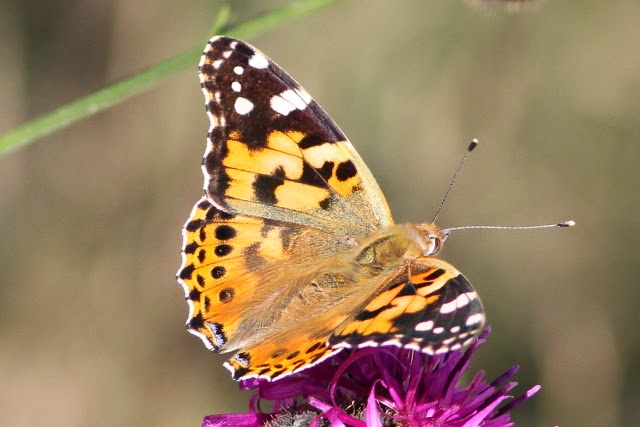 Long-term readers of this blog may recall my most disastrous of a series of dips last year was for a Bridled Tern in Northumberland which toyed with me one long, hot summer day. The same bird reappeared this year in mid-June on Fair Isle before relocating to the Farne Islands, where it was seen erratically last year through much of July and August. 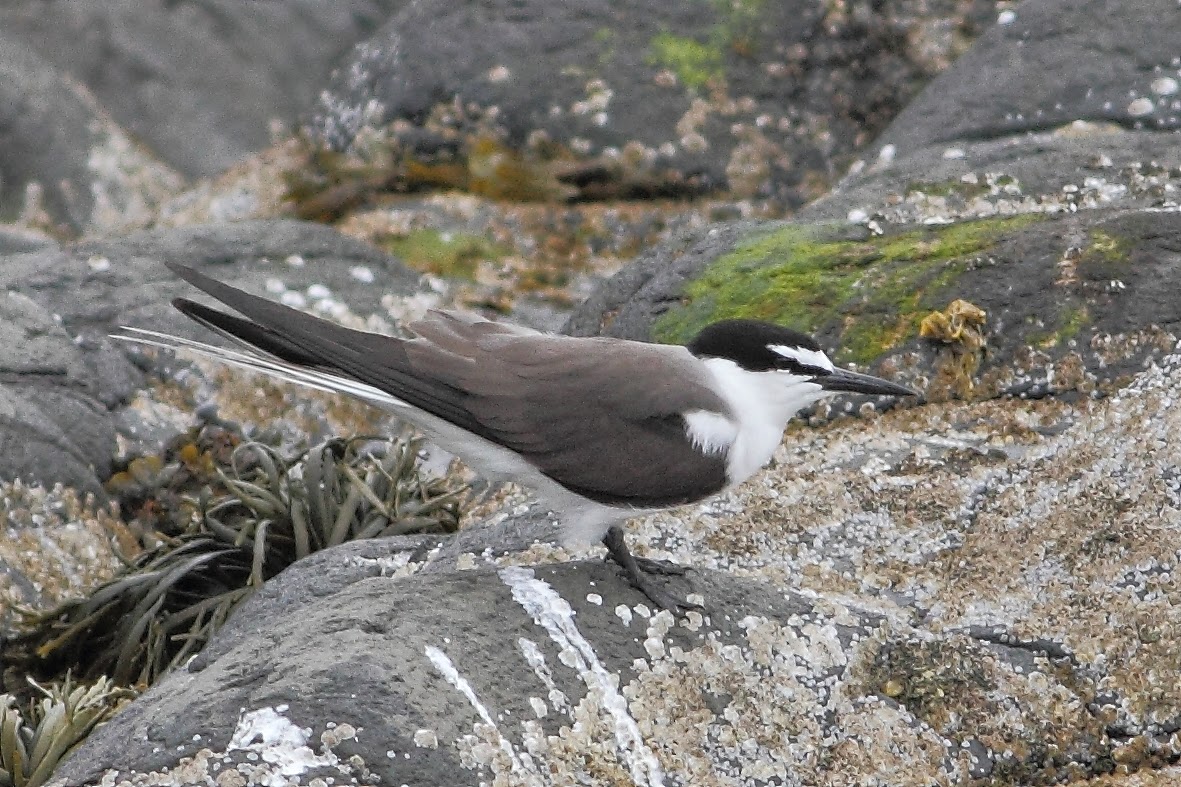 Going to see it the weekend after it reappeared proved impossible (no car) and the following weekend was no good either (no time), but last weekend offered the possibility of another attempt. The journey up on Friday night did not augur well, Oxford being completely broken, Silverstone causing a further diversion and the Tour de France topping off the chaos when I eventually reached Yorkshire.

Safely ensconced in Alnwick by midnight, however, I planned to spend Saturday and Sunday on the Farnes. I set off thinking I would have just 2 hours each day on Inner Farne, which is only open to visitors for a couple of hours from 1330. So I didn't hold out much hope of seeing the Tern, but at least it would give me a couple of shots at connecting.

In the end, via a slightly mysterious process of asking the right people the right questions, it emerged that a boat trip was available which would hang off the jetty of Inner Farne, the Tern's favoured spot, giving birders a better chance of seeing it. Timings, however, were not guaranteed, and, as always, subject to the weather, the discretion of the skipper and the competing demands for the services of him and his boat. 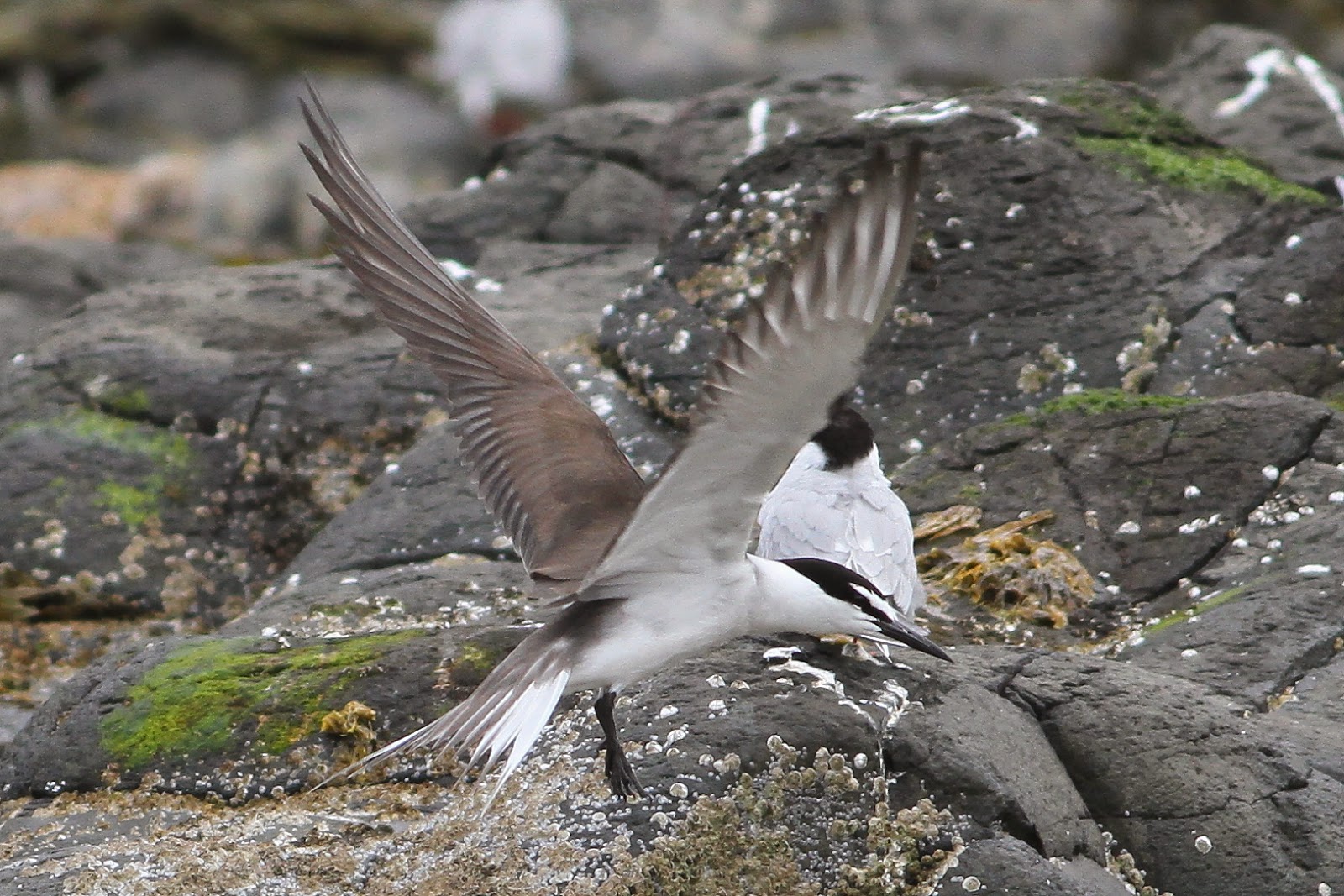 Saturday looked promising, with rain clearing as I reached the coast, but this soon caught up with us as we sat off Inner Farne, to the extent that by lunchtime we were thoroughly soaked. Spirits remained good though among the dozen or so birders on board as the captain confirmed that, despite the Island being closed for the afternoon so the wardens and parent birds could tend to chicks in danger of perishing in the cold, wet conditions, we could transfer boats and stay for the afternoon. After 6 hours, however, it was time to leave, and there had been no sign of the Bridled Tern. No matter, I told myself, it had been a fascinating day watching the comings and goings of Arctic Terns, Eider Duck, Puffins and other Auks just feet away from the boat, and gave a different perspective on a seabird colony from when seen on land. 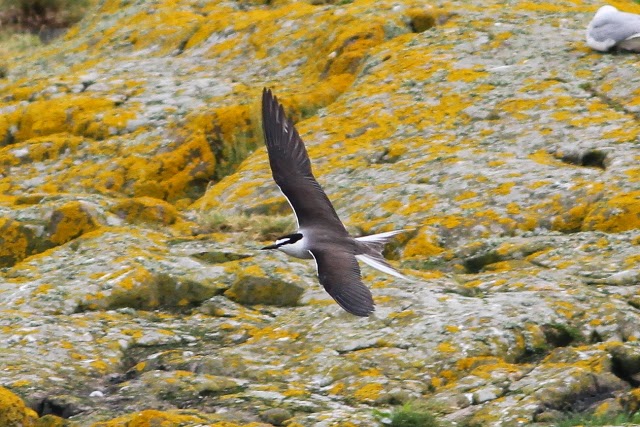 The local boatmen confirmed they would lay on a similar trip on Sunday so most of us who went on Saturday returned in better weather and full of optimism to Seahouses Harbour the next day, only to be told there would be no birder's boat after all. When we pointed out that some of us had come from as far as Dorset and Norfolk, and would have gone home had we known there would be no boat, a charter was rustled up and we were back on our now familiar mooring off Inner Farne by 0930. 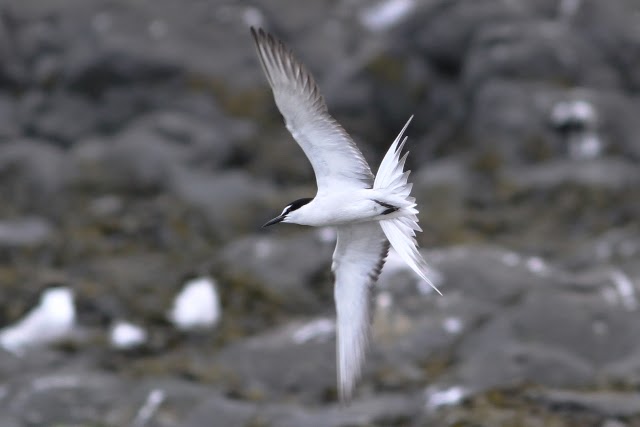 Four hours later and there was still no sign, and we had to leave to pick up punters from Staple Island to transfer back to Inner Farne for the remaining 2 hours of the day. As we did so, we enjoyed point blank views of a Guillemot chick taking its first foray into the water, and it looked at that point like this was going to be the highlight of the trip - not to be sniffed at, it was a genuine highlight and the first time I had seen this happen.
And so we returned to Inner Farne for what would be the last time, me reasonably content, but inside trying to suppress a growing sense of disappointment. Then as we pulled up to the quay, I could see one of the birders from Norfolk further down the boat punching the air. Clearly the Tern was back - but I couldn't see it. Panic, some language, and directions followed, then - bang - there it was in my bins, a vision in dusky grey, black and white. Then the rush, the relief, some backslapping and more language - happy this time, but still quite bad. I raised my lens, took my record shots, and got kicked off the boat by an impatient skipper who had another run to do. Not a problem - views were even better from the quayside, and the light slightly kinder. 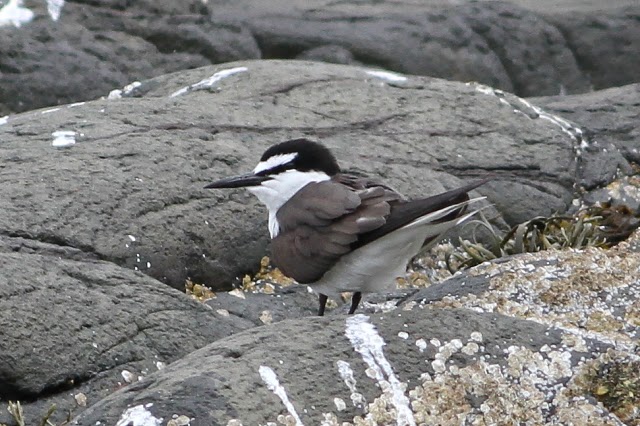 Those who had stuck it out all weekend felt vindicated for their patience and persistence, but we really felt for the father and son team from Yorkshire who had to leave at lunchtime having spent Saturday and Sunday morning on the boat with us. The Tern is sticking around as it did last year so hopefully they will get another shot. So all told, over the course of a year it took 2 trips, 22 hours of looking, 1600 miles of travelling and more of my children's pocket money than they can really afford for me to see the Bridled Tern. Was it worth it? Oh yes. Even at 1:30 on the Sunday before I had seen the Tern, I had had a great time - the Farne Islands are wonderful, and the sights, sounds and smells of the seabird colonies will stay with me for a long time. I'll be stringing out photos of some of the resident seabirds in other posts for weeks, no doubt.

If heading that way, my advice would be to contact the Seahouses boat operators first to see what is on offer, and don't necessarily rely on what they tell you being what you get - it may be for better or worse! And if not willing to shell out for the exploitative 2-night minimum stay/single supplement policies of the local hoteliers and guesthouses, try the excellent Alnwick YHA, a snip at £18.50 per night, plus full English breakfast for just over a fiver, and only 30 minutes drive from Seahouses. And go for at least two days, don't let anyone talk you out of it, change your plans, or make you come home early!
Posted by Peter Moore at 23:32 No comments:

'Incomers' aren't always as welcome as they might be in some parts of Purbeck, so here's one whose appearance shouldn't be controversial at all, or probably that much of a surprise given the changing climate: the Continental Swallowtail butterfly. A few sightings in previous weeks turned into regular ones at St Aldhelms Head, and it appeared that a small emergence, presumably of individuals laid as eggs by migrants some time last summer, was underway. In which case, they're not incomers at all really, but 'proper' natives now. And as British as the britannicus sub-species which is found in the fens of East Anglia.﻿ But not so fussy it would appear, as these were feeding on some pretty scabby clifftop thistles, lowering their standards well below that of their Norfolk cousins who rarely stray far from their reedbed colonies. I dashed off after work one warm evening last week with two children in tow, along with an essential ingredients for such a twitch: hand-held electronic gaming devices to keep them amused while I searched for Swallowtails.
Remembering Steve Smith's advice that they seemed to like the cliff edge I walked a short stretch of it and found one tatty but still impressive specimen which then flew onto the short grass of the main South West Coast Path to bask. After a few minutes it dropped into clifftop vegetation, presumably to roost, and was not seen again that evening. Steve has diligently catalogued and identified individual Swallowtails from various photos taken in the area so we can be confident of the presence of at least 5 individuals.
There is some slight concern about the origins of Continental Swallowtails, as apparently some of today's newlyweds, not content with sending lanterns burning into the night sky to become tomorrow's litter, are now releasing butterflies at their summer weddings. Presumably as a symbol of the fragile, ephemeral nature of their love which will die before autumn arrives? Whatever happened to cake and confetti?
Anyway, research is apparently underway to establish whether there is any possibility of a wedding-based butterfly release in the area, so hopefully that will draw a blank to help put any doubts to bed. In the meantime, similar emergences at other southern coastal locations at around the same time certainly suggest something more 'natural' was afoot.