Looking up today I saw a large, round yellow thing in the sky, which seemed to radiate heat. Anyone got any idea what it might have been? Didn't have the camera unfortunately - single observer record, no photos, no chance of getting accepted anyway...

The wet weekend (see photos) at least provided the chance to study my blog stats. People say they don't really look at these but, like an itch that has to be scratched, eventually they crack and write about them. For me, that time is now. I honestly haven't studied them before - and not because I lack vanity. No, the main reasons are: (i) too incompetent/lazy with the technology to know how and (ii) fear of rejection by the entire internet. The newly redesigned Blogger dashboard really rubs your nose in it though, and even a chump like me can't fail to access and mis-interpret some data.

One thing I seem to have in common with other bird-based blogs is that the most popular items are not necessarily about birds. I seem to recall Jonathan Lethbridge writing that a rant about dole scroungers generated more comment than anything he had done about birds. My equivalent on a much smaller scale is a post about the Blandford Otters, which has been visited more than any other by a good margin. I had assumed that half-decent rarity photos posted on Birdguides would be the main source of referrals, though this can't be so with the Otter, on account of it not being a bird. Similarly, 'Bournemouth Lizards' came in third, and 'Moth Breakfast' was not far behind. Presumably 'Ronseal' blog post titles like those which do what they say on the tin get picked up more by search engines than smart-arse puns about Buntings.

Most of my page views predictably come from the UK (probably from me, but Dave Bradnum pushes a fair trade my way), with New Zealand a strong second (bumped up by my ex-pat pal Matt Jones, no doubt). Apparently 209 Slovenians (or one very lonely one) can't get enough of me. So for you: 'hvala za branje kolega. Vendar pa bi res dobil večveč' (translation: 'thanks for reading mate. But you really should get out more').


A quick stroll around Swineham Gravel Pits this evening suggested that more Reed and Willow Warblers were on territory compared to this time last week, though singing Chiffchaffs were actually fewer in number. Good to find that a pair of Little Ringed Plover first reported earlier in the week were still on the flooded meadows near the pits - a tick for my 'walked from home' list. The pits looked quiet at first but a second scan revealed a 1st summer Little Gull hawking over the water. The flight is very tern-like though this bird was also paddling on the surface like a petrel. Perhaps the most unusual sighting, however, was an Orange Tip butterfly roosting on a bramble - it's an easy butterfly to see in Spring, but they always seem to be on the move and rarely settle. This one flew past me at about 1700 when it was still sunny, landed on the bramble, and was still there when I came back in overcast conditions at 1900. Pictures below.

Our last full day on Mull and, inspired by pictures like these of White-tailed Eagles fishing off the back of boats on Mull, we emptied the piggy bank for a 3 hour trip today with Mull Charters on Lady Jane. This was its first trip of the 2012 season, and with an excellent success rate in the last two years, hopes were high. A male Hen Harrier on the Torloisk road, and a female over the car park, seemed like good omens, as did a 2nd winter Iceland Gull which hung around the boat as we moored for tea and biscuits. 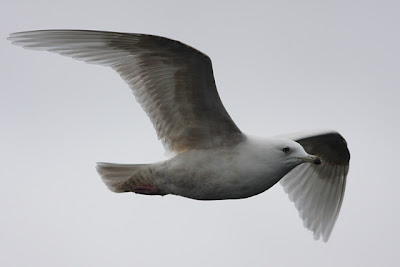 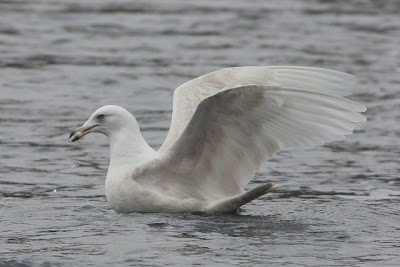 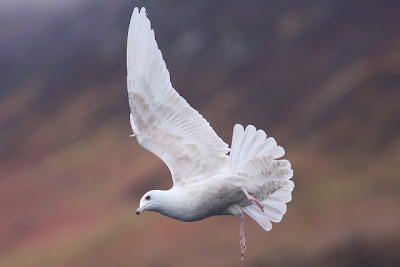 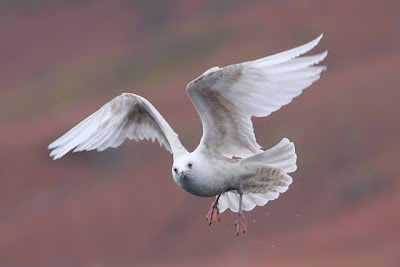 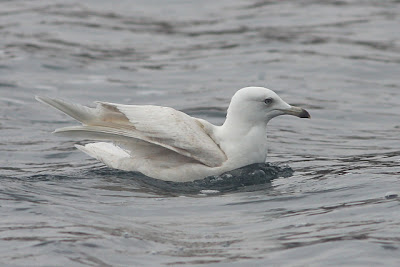 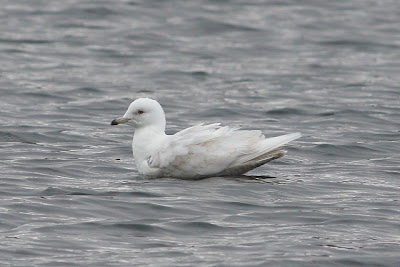 Although the skies were leaden, the inky waters of Loch na Keal and backdrop of the Gribun rocks made for a stunning setting, and with only 10 on the boat it was peaceful too. Auks and divers punctuated the journey, but after a couple of hours we were forced to concede that the White-tailed Eagles were not going to show. Particularly frustrating as the day before we had watched four circling over the area where the boat now sat! A distant view of a Golden Eagle was some consolation, but not what we had hoped for.


﻿
A pleasant cruise back to Ulva Ferry took us past some impressive basalt columns (made by the same geological process that produced nearby Staffa), a roost of Shag, a flotilla of Eider and some more divers. One with a pale bill merited a closer look given recent records of White-billed on Mull, but we had to conclude it was just a grey-billed Great Northern. 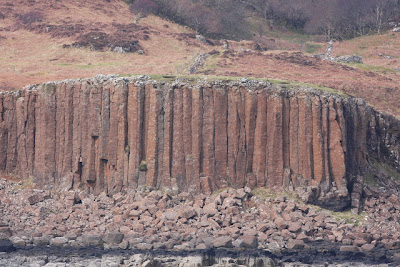 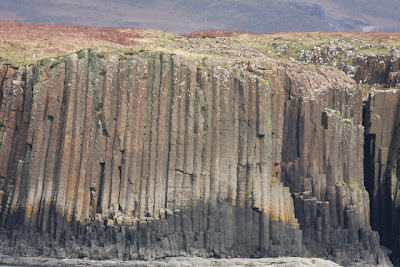 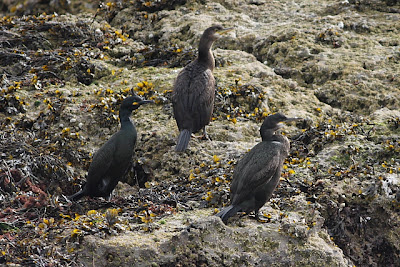 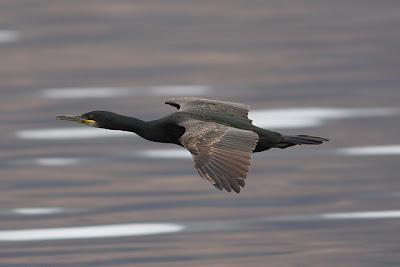 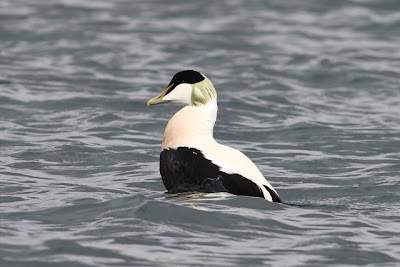 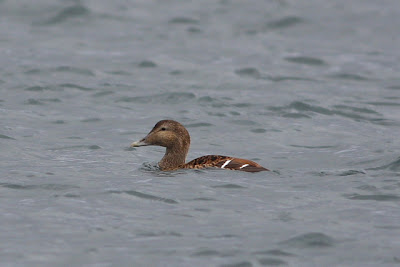 Although pleased with the Iceland Gull, there was inevitably some disappointment at not seeing the Eagles. Then, literally five minutes from the quay, an Otter surfaced just off the bows and showed superbly for the next five minutes - the only one we saw all week, and a real highlight not just for the boat trip but the whole holiday. It was almost as bold as the Blandford otters which I saw in November, though the setting made this just a bit more special. 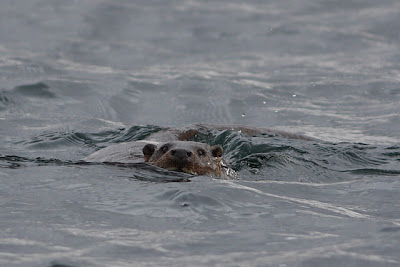 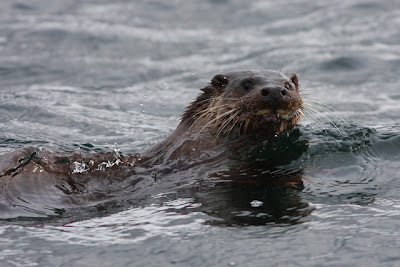 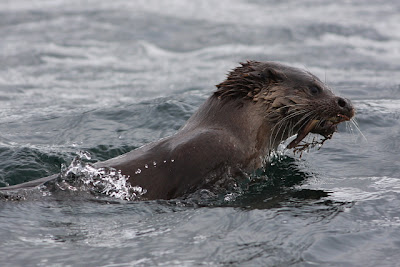 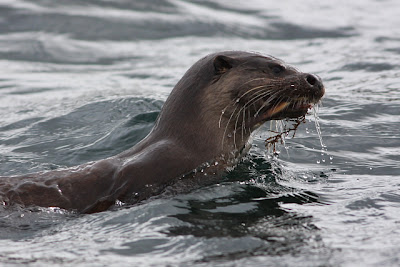 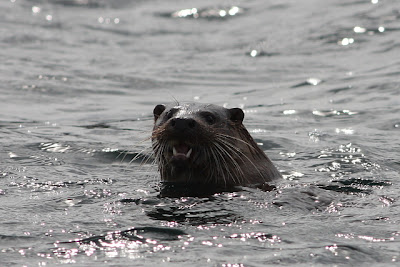 A reasonable forecast persuaded us to re-mortgage the house for a four hour boat trip out of Tobermory today. Cetaceans were a possibility and we did see a few Harbour Porpoise, though their short, tight rolls in choppy waters made them impossible to photograph. The boat crossed the sound of Mull to pass under the cliffs of the Ardnamurchan peninsular, mainland Britain's most westerly point, and then back down the east coast of Mull, where a single Grey Seal swam amongst a colony of Commons.
﻿


﻿
﻿﻿﻿﻿﻿Auks and a Great Northern Diver provided the main bird interest up to this point. Then I saw two barn doors with tails flying over the Sound - immature White-tailed Eagles. A few distant pictures were possible before they headed down the coast towards Ardmore Point, where they were joined by two more White-tailed and a Golden Eagle. On rounding the point, an adult White-tailed could be seen sitting in a tree, being  mobbed by a Hooded Crow.