More of the approachable Black Redstart on the coastal defences ﻿at Lyme Regis today. 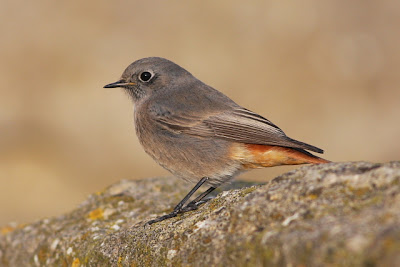 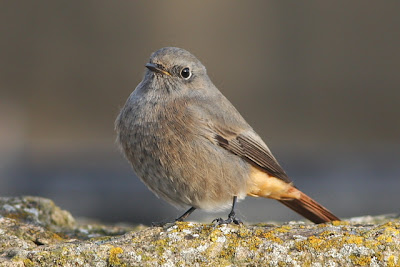 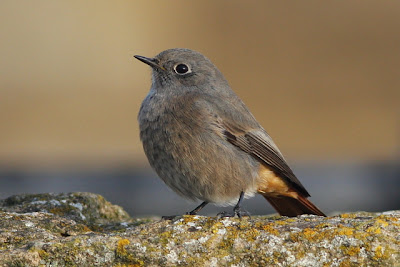 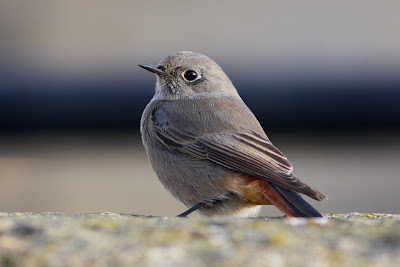 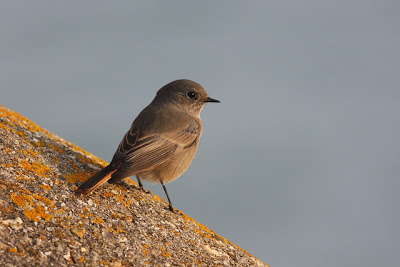 Sandpipers on the rocks

We had friends visiting from Cornwall this weekend and as they were heading off at lunchtime today it seemed rude not to accompany them as far as Lyme Regis where a Spotted Sandpiper just happened to be hanging out. I took non-birder Alec with me to look for a Rose-Coloured Starling in Weymouth en route. I saw it, but it flew before I could get him onto it. He assured me he would get over the disappointment, 'in about 5 seconds'.
On arrival in Lyme town centre I recognised the shape of Poole Harbour stalwart Shaun Robson in alien habitat at the end of the Cobb - a rare foray away from Lytchett Bay. This was a good indication of the best place to start looking for the Sandpiper.

Shaun confirmed that the bird, a Dorset tick for me, was still there, hopping around the rocks among more sedentary Purple Sandpipers. In the half-hour we were there we must have shown it to 20 passers-by through the telescope, all of whom seemed surprisingly interested in this distant, small brown wader from the Americas. Back in town, Rock Pipits and a Black Redstart performed on the sea defences in glorious afternoon light.

After bleating about having no time to go birding in my last post, I decided to do something about it a take a day off. On Friday, my diary miraculously cleared. Unfortunately, on Thursday night, so did the skies over Margate, and the Eastern Black Redstart present since Saturday was nowhere to be seen.

I spent a couple of hours looking for it and photographing waders on the beach before accepting the fact, and then salvaged something from the day by visiting some old haunts from my time as a Kent resident.
Oare Marshes was quiet but a Water Rail preened, partly obscured by the reeds. Lapwing were as photogenic as ever on the entrance track at Elmley Marshes, and a Marsh Harrier came surprisingly close.

Dipping on the phoenicuroides was made worse by the fact that another in Northumberland was still present, with a Greater Yellowlegs nearby, but I had to be back in Dorset by 15:00 so a long-distance twitch was not an option. Despite this, though, it was all in all a therapeutic day, giving me my first glimpse of Turner Contemporary (looks like a posh fish processing plant) and a reminder that you can't see everything.

Kind of describes the period between now and Christmas, in birding terms at least. This is different to compromise, which might imply more willingness on my part. Take this weekend just gone: Mum and Dad were visiting, invariably the cue for an influx of rarities. I see them rarely these days (Mum and Dad, that is), so going to Northumberland, or even Margate, would have been considered bad form. Mum has a bad foot so dragging them around Swineham Gravel Pits was also out of the question. This weekend, the wife's best friend is arriving, and bringing her boyfriend 'so I'll have someone to hang out with'. The fact that I would be quite happy hanging out with the Brent Geese in Poole Harbour makes me, by common consent in this house at least, an ungrateful, anti-social cuss.
﻿﻿﻿
﻿﻿﻿The weekend after that and we're off to friends in Ealing for what has somehow become 'the annual family Christmas shopping trip to London', second only to Eurodisney on my 'I'd rather gouge my own eyes out with the sharp bit of the holster on my pager' list. Only the slim chance of swinging a trip to the Wetland Centre at Barnes en route is keeping me going.

After that, the remaining weekends will be occupied taking the children to the birthday parties of other children all the way to 2012: Tizer-fuelled migraine-factories, deliberately designed by begrudging parents who will apparently stop at nothing to prevent me enjoying myself by going birdwatching. With the lighter weekday mornings taken up by repeatedly shouting 'get your uniform on', and the dark nights having drawn in, even the chance of nipping out before or after work has vanished. I could pretend all this social activity makes me a well-balanced individual with a healthy interest in things other than birds, and a sense of responsibility towards my family and friends. But, as the cursor hovers over the words 'Publish Post', I realise it's a bit late for that...
Posted by Peter Moore at 21:51 No comments: 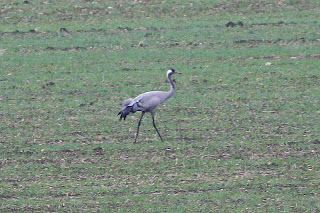 Part of an influx to the south of England, this Crane near Langton Herring spared me the embarrassment of having Sandhill Crane on my list for the year but not Common. It flew over the Fleet as I approached and landed in a field where it seemed quite settled. Great video footage of a flock of 24 in Cornwall on the Cornwall Birding website.
Posted by Peter Moore at 22:24 No comments:

﻿﻿﻿﻿﻿﻿﻿...and one back for my list at least, thanks to a recent judgement of the British Birds Rarities Committee. They have concluded - and I'm in no position to argue - that the Redhead I pursued in South Wales in 2003 may have been a half-breed (for any non-birders reading this, and to avoid causing offence to ginger women from the principality, a Redhead is type of duck). Some anomalous features apparently could not rule out a hybrid. I'm not sure exactly which, but rules is rules. ﻿﻿
﻿

Crawling through a hawthorn hedge with my pal Matt Jones to grab this photo in fading light after the bloke on the gate at Lisvane Reservoir had locked up and told us to bugger off was all in vain then. I could, of course, ignore this judgement and leave Redhead on my list, like a rebel without a point. But I'm far too conformist for that. And besides, if we all started making up our own rules for what went on our little lists where would it all end? Desperate twitchers would be, like, setting up their own clubs, and splitting species willy-nilly to bump the numbers up! How mad would that be!
﻿﻿
Posted by Peter Moore at 22:44 3 comments: 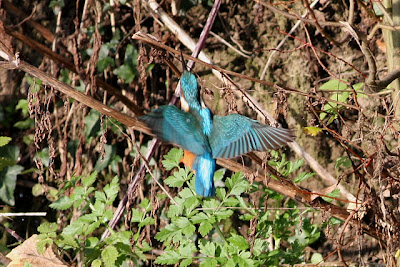 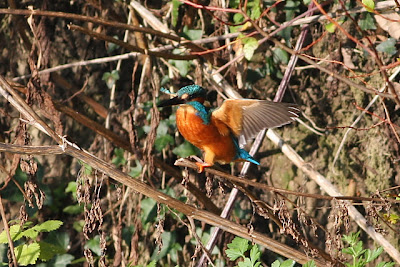 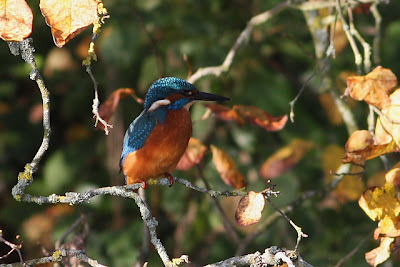 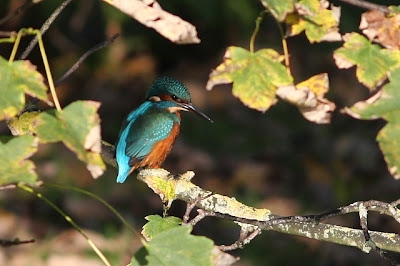 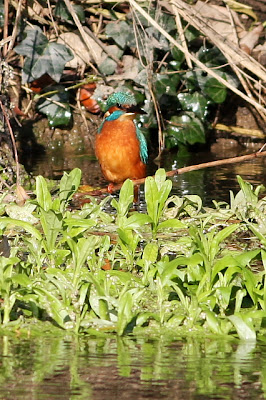 The local grapevine was buzzing with news of Otters performing near the weir at Blandford Forum so a family visit seemed in order today. After a couple of hours we had seen no otters but we did see Kingfisher, Grey Wagtail and a bunch of other Dorset birders with cameras, prams, kids and dogs doing the same as us. Eventually we walked back to the stone bridge upstream of the weir. At this point Claire and I both saw a long ripple in the water, some ducks flushing, and then - this was the clincher - a couple of photographers running back to the weir in anticipation of the Otter's arrival. We went back to the weir and watched it at point blank range with a small crowd of admirers for over half an hour. The Otter was diving at the base of the weir (hence the bubbles in these pictures), bobbing up, chewing a bit, looking around and then repeating the sequence. 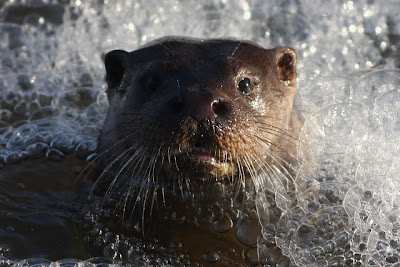 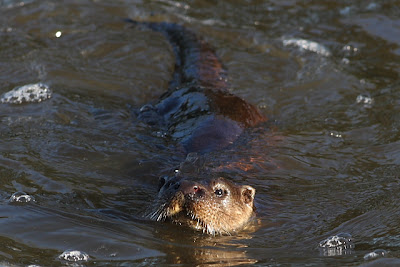 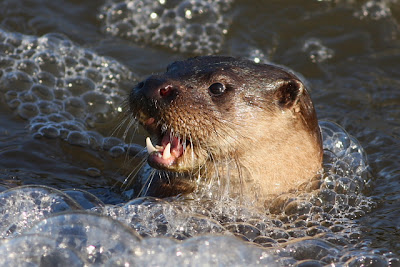 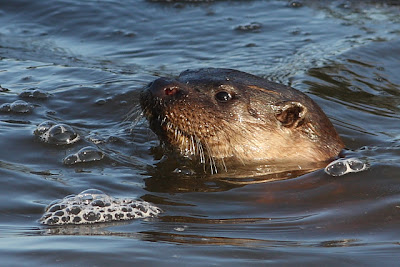 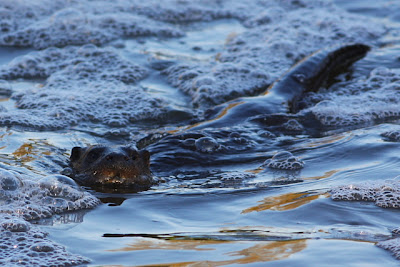 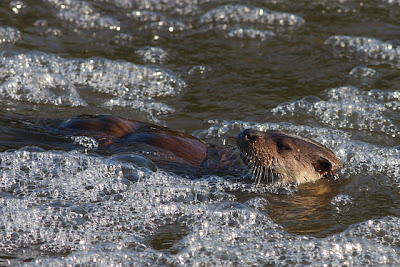 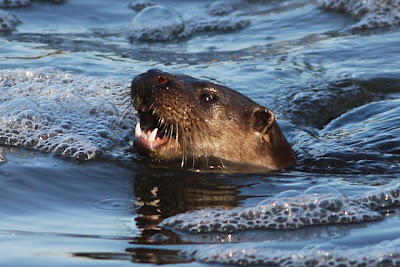 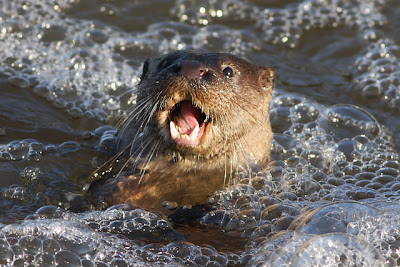 Sprites on the Head

A mid-week Pallas's Warbler could not be relocated on Hengistbury Head this morning but a Yellow-Browed Warbler remained, sharing a bush with a Firecrest.

...and a few more besides. The Shropshire Steppe Grey Shrike - or 'Shroik' as the twitchers from our great second city pronounced it - never came closer than a couple of hundred yards today, allowing only a distant digiscoped effort. The ever friendly digiscoping guru Paul Hackett arrived towards the end of my visit, and didn't even bother to get his camera out, so far away was the bird and so poor the light by then. Still, it was a tick for me, having somehow failed to go and see the ridiculously tame bird in Lincs a few years ago before it became suspected Sparrowhawk food. I shared Paul's surprise at how dark the mask looked in the field, but even in this Wildlife Photographer of the Year (Fuzzy Images of Distant Birds Section) award winning shot, paler lores and bill, and a large white primary patch can just about me be made out. Pictures of this bird in flight by local photographer Jim Almond show these and other features which look good for Steppe Grey Shrike much better, though it sounds like even Jim's monster lens struggled with the distance and lack of light. 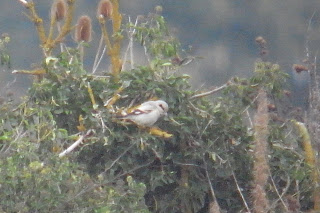 I had booked the Monday and Tuesday off work this week to catch up with the inevitable mega which normally turns up on the mainland when I'm on Scilly. Steppe Grey Shrike in land-locked Shropshire wasn't quite how I dreamt it, but I was determined to squeeze a new bird out of what was left of October, and this was the only one available, so I have to be grateful for that. The site was close to Harper Adams College, which I remember attending for a conference many years ago. Quote of the day from that was a friend who announced after a few jars 'I'm happy for the world to know I'm gay but try to keep quiet about being a birder...'
Posted by Peter Moore at 03:00 No comments: