Of Butterflies and Bats 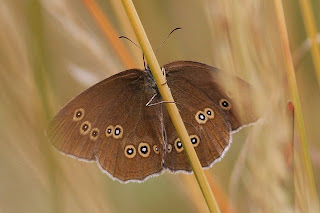 Returned to the scene of last night's Wild Boar sighting in the Forest of Dean this afternoon (see post for 17th July) - plenty of evidence of their presence in the form of rooted up verges and flattened bracken, but no sign of the beasts them 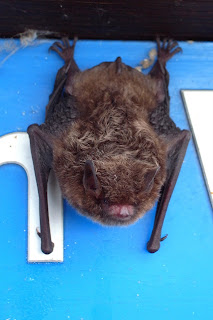 selves. Lots of Ringlets (above) out, however, despite the overcast conditions.

Then set off home for Dorset with a quick picnic stop on the way at Ham Wall RSPB in Somerset to look for Little Bittern - had to settle for brief flight views though enjoyed much better views of this bat (right) which was roosting on one of the reserve's interpretation signs. I am advised that the large feet and bare face make it a Daubenton's, which fits with the wetland habitat where it was hanging out. No pun intended.
Posted by Peter Moore at 20:00 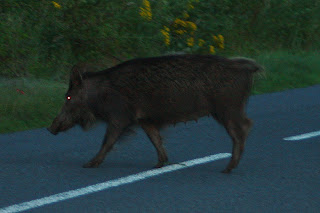 Visiting parents in my native Forest of Dean this weekend. The local paper was full of letters from residents feeling intimidated by Wild Boar in the Forest, many demanding the usual human response to unusual wildlife. It occurred to me that a dusk drive around a few likely spots might be worthwhile and within 10 minutes I had to pull over to let a family party of Wild Boar cross the road in front of me, led by t 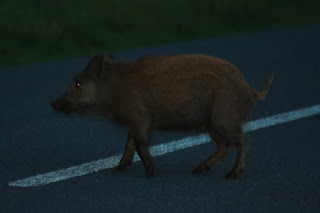 his female (above). Most moved on oblivious to the car but one youngster turned and ran towards me before thinking better of it and following the others into the bracken. Some of the juveniles still had their stripey fur, the remains of which can just be see in this one (above). Rounded off the evening with a stag Fallow Deer and a roost of eight Common Sandpipers at Cannop Ponds.
Posted by Peter Moore at 07:00

On the wing at Durlston 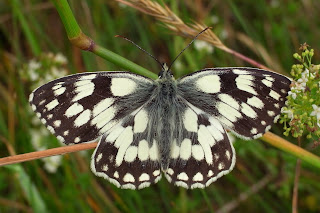 A welcome diversion to Durlston on the way home from work provided an excuse to look for butterflies - it was a bit late in the day, and the overcast weather was not ideal, but good numbers of Marbled White and Small Skipper were still on show. Didn't see any Lulworth Skip 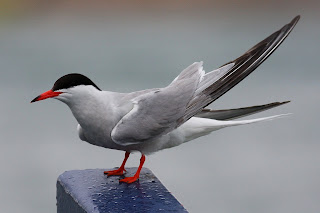 pers - still a bit early for their peak - but some had been seen by the Dorset Countryside rangers earlier. On the way home, this feisty Common Tern landed on the bows of the Sandbanks Ferry.
Posted by Peter Moore at 03:00

Dawn 'til Dusk (part I): quest for Quail 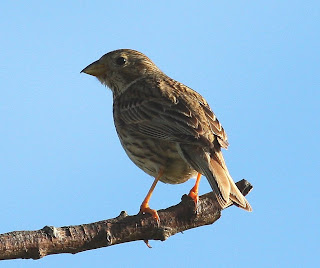 In 10 years of birding in Britain I have somehow not managed to see Quail. Heard plenty, but never set eyes on one. Having decided to head to East Anglia for a long day trip, stopping off at some likely sites on the way in Hertfordshire therefore seemed like a good idea. I left home at 04:30 and arrived just before 07:00 at Wallingford. There was no sign, but some excellent views of Corn Bunti 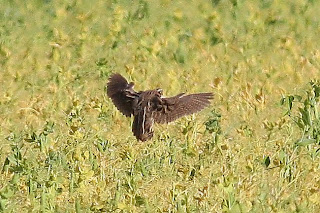 ng (above) and Yellow Wagtail made for an enjoyable start to the day. Moving on to nearby Deadman's Hill, I stepped out of the car and immediately flushed two Quail (right) - had I known I probably could have stayed in the vehicle and enjoyed close views! As it was I just managed a couple of shots before they dropped into a pea field. Both birds then traded 'wet my lips' calls for a few minutes before falling silent again. A promising start to the day...
Posted by Peter Moore at 19:15

Dawn 'til Dusk (part II): morning in the Fens 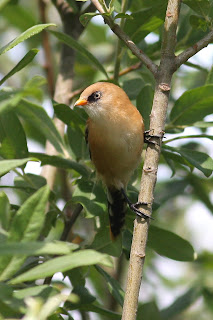 ccessful start to the day, next stop was Lakenheath RSPB. I had not been here for some years so the new visitor centre and improved access were a pleasant surprise. No luck with Golden Oriole or Cranes - the former have apparently been quite difficult to see this year - but good numbers of Marsh Harriers and this young male Bearded Tit (left) were good to see. The walkways cut through reeds behind the visitor centre were very good for dragonflies and warblers, including this Reed Warbler (below) which posed briefly but well for the camera. 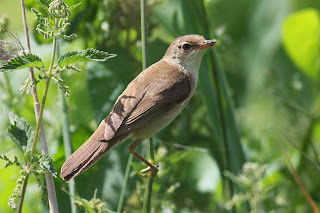 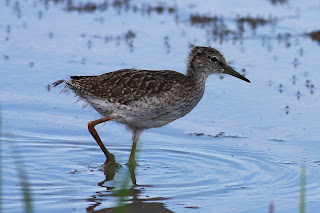 Sandpiper added an exotic flavour to the waders at Titchwell early this afternoon. Dunlin, Knot, Ruff, Whimbrel, Curlew, Avocet, Lapwing, Green Sandpiper, Black- and Bar-tailed Godwit, Redshank, Spotted Redshank and Snipe made for an impressive collection, with some of the Knot still in striking summer plumage. S 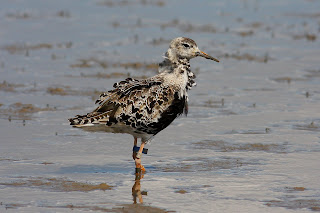 tar wader though was perhaps this Redshank chick (top) which pottered around outside the hide, just pipping a French-blinged Ruff (above) which seems to have fallen victim to a ringer with frustrated ambitions in origami.
Posted by Peter Moore at 19:10 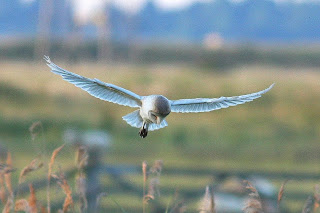 The climax of a long, hot and happy day came when I joined 50 other eager souls who had waited all week for a chance to see the River Warbler singing from private land in Norfolk. Access was skillfully organised and cheerfully managed by Dick Filby among others. The bird had been singing the previous evening from 8:00 pm, so by 8:30 pm a few nerves co 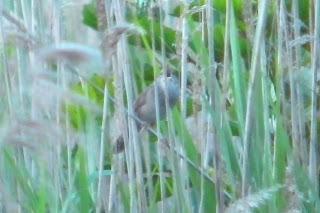 uld be detected. By 9:00 pm some were fearing the worst. Hobbies, Kingfishers and Barn Owls (top) came and went, but no River Warbler. Then, at 9:20 a breath-taking, powerful, persistent song exploded from the reedbed, shortly before the singer showed from shrubs, reeds and thistles. Even in this sub-record shot (above), taken in near dark, the rounded tail of a Locustella can just about be seen.
Posted by Peter Moore at 19:00

The furthest I have ever travelled for a bird that wasn't there was to Caerlaverock from Kent for a White-tailed Plover with my good friend Matt Jones. After four hours that morning staring at fog it eventually became clear that the bird had gone overnight. Holiday plans prevented me from joining Matt when he saw the relocated bird at Leighton Moss, and 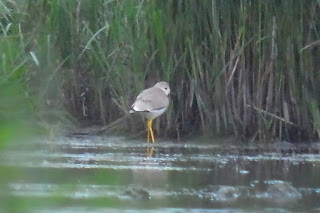 work commitments made an attempt at the more recent Seaforth bird impossible. Matt recently e-mailed me from New Zealand with some good-natured taunting about this, so news of presumably the same bird at Rainham proved too tempting to ignore. Finishing work at 16:30 allowed me to get there by 19:30 and watch this beautiful wader until near dusk. Even in this distant photo, taken in fading light, the striking yellow legs make identification easy.
Posted by Peter Moore at 19:50 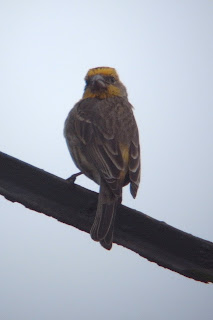 With a free afternoon, only Radio 5 Live for company, and no other distractions closer to home, I felt I had finally run out of reasons not to go and see the House Finch (right) at East Prawle. Despite the certainty that, if it has come from the Americas, it must have been by boat, the fact that it is naturalised rather than native to the East Coast, and the continuing possibility of it being an escape, the presence of other American sparrows at the same time creates a small chance that it may make it onto the British list as a ship-assisted vagrant. Crazy, perhaps, but I don't make the rules. Holland had just beatean Brazil and Murray was a set down when I arrived, two by the time I saw the bird and out long before I gave up on a second look. Feeling sullied by the experience of 'insurance ticking', I had to spend some time photographing 'proper' birds in the form of Cir 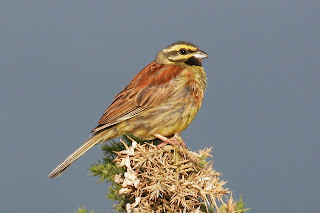 l Buntings at Prawle Point - at least 3 singing males (right) within 50 yards of the car park. My luck held out, unlike Ghana's, on the return journey with the Gull-billed Tern reported at Topsham at 20:53 just as I was approaching Exeter. By 21:30 I was watching the bird in the near darkness, accompanied by a beautiful summer plumaged Spotted Redshank, a family of Black Swans, hordes of baby toads crossing the path and a huge, restless Sand Martin flock roosting in the reedbed.
Posted by Peter Moore at 19:00