Four visits to Portland this half-term may have failed to deliver the hoped for Dorset mega - several rare migrants being netted and ringed but not seen again after their release - but in addition to the raptors featured in my last post, there were still some other attractive birds to photograph. Perhaps most widely appreciated by birders dipping on the Red-flanked Bluetail and the Pine Bunting was the Reap Lane Turtle Dove. The precipitous reduction in the number of this once commonplace species in Britain is well documented so I won't bang on about it here. Suffice to say if the depressing combination of factors which have contributed to its decline could be reversed we could all look forward to spring, and the sight and sound of this handsome bird, a little more.

Raptor round your finger

I've been up and down to Portland this week like the number 1 bus, chasing shadows mainly - specifically the shadows of a male Red-flanked Bluetail and a female Pine Bunting. Both of these major rarities were trapped at the Bill in recent days - see here for stunning photos of them wrapped around the fingers of Martin Cade - and while the chances of either sticking around seemed slim, with a few days off work this week it would have been rude not to head down in the hope of seeing them. In the end I saw neither but there were some photogenic fowl to be enjoyed nonetheless. Raptors put on a particularly fine display with six species seen. Photographic highlights below.

My return to work this week was made a lot easier, and less stressful, by the knowledge that I had seen the Siberian Accentor at Easington last Sunday, the second record for Britain. Many birders will still be pinching themselves that they were able to see one of the six individuals of this species which have graced British shores over the last fortnight. The Yorkshire bird, which finally moved on on Thursday, was undoubtedly the most widely twitched. Checking the time stamps on my images we had just 15 minutes with the bird showing at close range, but happily it seemed like much longer.

The East Yorkshire coast was enjoying a real purple patch with flocks of Dusky Warblers and the odd Radde's among them. Siberian Stonechats were popping up and, the day after our trip, an Isabelline Wheatear was found also in Easington. We didn't have time to go looking for such goodies unfortunately, but before heading south we did manage to stop at the beach by the Bluebell café where a Shorelark was very confiding. A few pictures of the Shorelark below, and, as a special treat, a few more of Prunella montanella - yes I know that sounds like an adult movie starlet from an American mountain film festival, but if you can just drag your minds out of the gutter for a second, you will recall it's actually the scientific name for the Siberian Accentor.

October 2016 will be remembered as a month in which birding prophecies, some would say fantasies, came true. On the morning of Sunday 9th, my friend James Lowen tweeted an auspicious message to the world to the effect that Britain's first Siberian Accentor would be found on Shetland that day - and within hours he was watching just that. This inspired me to make my own prediction the following Wednesday, texting my pal Steve Smith with the advice that he should pack a bag as, due to work and family commitments on Friday and Saturday, I was unable to get out, thus virtually guaranteeing another Siberian Accentor on the east coast during that time. Within hours my prediction had also come true, and half the birding world and his ex-wife was heading in the general direction of Spurn to tick it. 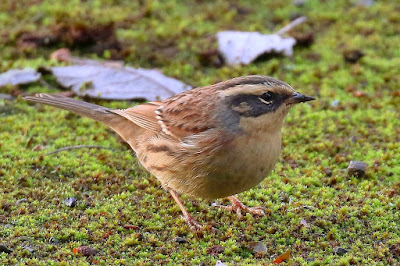 There was nothing for it but to knuckle down to my work commitments on Friday and put the Accentor out of my mind for the time being. Not an easy task, I confess, but it got easier on Friday night when we received a visit from my long lost Uncle Bill, over from the US for the first time this century, making his appearances on these shores rarer than those of Siberian Accentor over the same period. Similarly, Saturday was taken up watching The Prime of Miss Jean Brodie and enjoying a live audience with its star, Dame Maggie Smith, at the wonderful Rex Cinema in Wareham. This was the centrepiece of the Purbeck Film Festival which my wife has been helping to organise as a volunteer, so there was a three-line whip on attendance. With the working week complete and a highly successful event concluded I felt that both professional and family honour had been satisfied, and I could start thinking more selfishly about twitching the Accentor on Sunday morning. 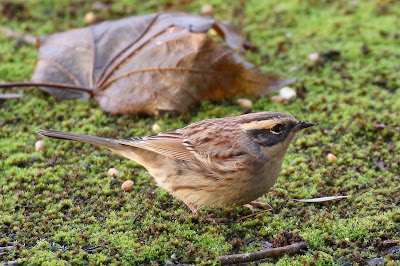 At this point Claire informed me of yet more film festival commitments arising the following day, during which I would be required to mind the children in her absence. This led to what can best be described as a full and frank exchange of views about the relative merits of twitching Siberian Accentors versus the fulfilment of paternal obligation. Fortunately, a chance encounter with the soon to be canonised Turnocks at the Rex offered a solution to the childcare problem at the centre of the dispute, so the twitch was back on. Needing to be fresh for the early start, I made sure I got an early night on Saturday in preparation for what would be a long trip the following morning. 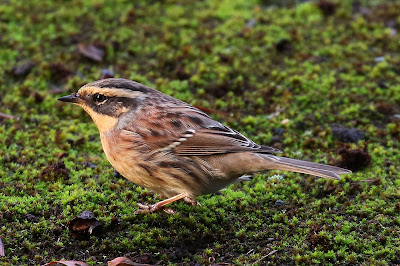 I woke before my alarm in the wee small hours and was preparing to leave just as Claire was coming to bed - testament to the earliness of my awakening rather than the lateness of her retirement. This provided another opportunity for her to give a not entirely complimentary assessment of my qualities as a husband and father - all fully deserved, of course. Thus chastened I headed for the car with my telescope, my camera and my shame. There I was joined by prior arrangement by Chris Patrick from Weymouth, who I last saw at the turn of the year when I stumbled upon a Grey Phalarope in Portland Harbour. Chris had heard that I was thinking of travelling and was interested in sharing a lift, a request I was delighted to accommodate. This was my third long distance twitch this year with a fellow dad, and we were able to while away the hours comparing notes on just how much trouble we would be in with our respective spouses when we got home. 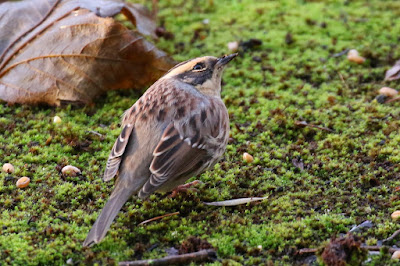 Chris is a Royal Navy meteorologist, a handy guy to have around in the circumstances. On the journey north, his skilful reading of the charts helped manage my expectations about the reasonably high chance that the bird would have moved on overnight, in view of the clear conditions over the Yorkshire coast. As a result I was probably as prepared for negative news from Easington as it was possible to be. I needn't have been, as when we were just over half-an-hour away, the birding grapevine bleeped into life with confirmation that the Accentor was still present. 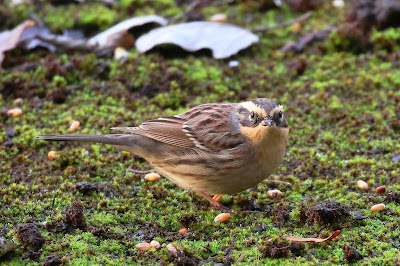 Before getting carried away though, we had to see the bird, and after the initial relief at the positive news, there was just time for me to develop raging anxiety about whether it would succumb to a cat or a Sparrowhawk before we arrived. I needn't have worried as having parked the car in the field organised by the splendid chaps at the Spurn Bird Observatory, and followed their directions to the site, we were able to walk up to the Accentor's chosen patch of moss covered tarmac and set eyes on the near mythical rarity within seconds of arriving. 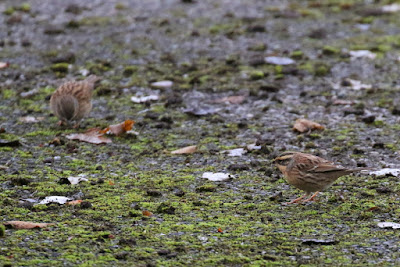 There were none of the queues reported on Friday and Saturday, and plenty of room for arriving birders and ourselves to enjoy the bird at leisure as it fed voraciously at close range. We even enjoyed five minutes of early morning sunshine bringing its rich yellow ochre underparts to life, before it flew to the nearby gas terminal where it became more elusive behind a high fence. Smiles and handshakes were then the order of the day. Local birders rattled collection tins and as I shook the hand of one, I realised it was the hand which I last saw cradling the lifeless corpse of a Great Snipe. 'Sorry about that', its owner said kindly but unnecessarily when I reminded him of this earlier less successful visit to Spurn, but all was forgiven already. 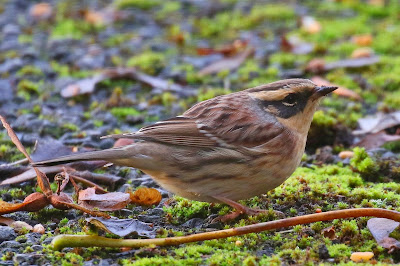 And so it came to be that, a week after the first Siberian Accentor for Britain was found on Shetland, I was watching the second in Yorkshire, the third having turned up the day before in Durham - and while we were watching the second, the fourth arrived in Sunderland! Before I had time to write this post the fifth had been discovered in Northumberland, and it seems quite possible that there will be more in the days and weeks to come. Those who measure rarity value in terms of exclusivity may regard this multiple arrival as 'devaluing' that pioneer from Shetland. Those who appreciate migration in a broader context may feel it does the opposite - an unprecedented natural phenomenon arising from some extraordinary weather patterns, producing a more poetic series of occurrences compared to the appearance of a lone vagrant which, for all we know, may have hitched a ride on a passing ship. 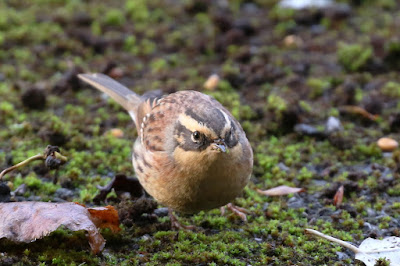 While we would have liked to spend more time at Spurn, after a close encounter with a Shorelark(more on that in a later post) and a half-hearted search for a Radde's Warbler, the rapidly deteriorating weather and collective guilt complex caused us to head for home to pick up the pieces of those shattered brownie point jars. I was back in time to take my son to his afternoon swimming class and cook the Sunday roast as a peace offering to the rest of the family: I may be a deadbeat dad, but I make a mean Yorkshire pudding. I served the soft, puffy confection (which came out exactly the same colour as a Siberian Accentor's breast) to my grateful offspring, and the healing process had begun.
Posted by Peter Moore at 22:40 1 comment: