Between 'beasts' there were a couple of sunny days which encouraged me to head out with the camera in search of early spring reptiles. Not far from home, a south facing bank is favoured by basking Adders which, with a long lens, can be photographed from the road without risking disturbance. Half a dozen had braved the low temperatures to catch some rays. Amazing to see them flattening their bodies to get maximum warmth from the sun.
A recent visit to Portland in search of migrant birds also provided an opportunity to look for the Wall Lizard which has become established on the island. Finding this species was quite straightforward as they bask on the rocks and around the chalets of Church Ope Cove. Photographing them was another matter - the first and last sign of one was often a scuttling noise as it vanished under a beach hut! Unfortunately this non-native species appears to prosper at the expense of native lizards. They tend to return to the scene of past crimes so despite the frequent disappearing acts, a few photographs were possible with patience.
A Common Lizard later in the day was my third reptile of the year but unfortunately it too was vanishing - down the throat of a Kestrel. This bird was one of a number which gave remarkably close views during my meanderings around the quarries, cliffs and coves of Portland:

Dropping in for a chat

I joined the ranks of the unemployed this week for the first time in 27 years. In case you were worried there, don't be, I wasn't fired from my job at the council in disgrace: fortunately, unlike many of my colleagues in cash-strapped local government, I was able to leave at a time of my own choosing, and I shall return to full-time employment as early as next week. But more on that later, the week between jobs provided an opportunity yesterday to get out and about with the camera.

﻿
It being mid-March, as the first summer migrant birds had been trickling in all week, there was one species in particular on my mind: Wheatear. Rising early I negotiated the road works onto Portland and hit the Bill slopes just as they were being kissed by the rising sun. The immediate reward was two male Wheatears. Seeing these long distance migrants from Africa catching the morning light was a tonic and appeared as proof that spring was winning the battle with winter, despite the forecast for weekend snow. Skylarks singing overhead seemed to prove the point.﻿﻿ An obliging male Stonechat on the slopes and a Black Redstart in the Bill quarries completed an attractive trio of chats for the morning.
A brisk southerly saw rough seas crashing around the obelisk at the Bill's southern tip, so much so that the Purple Sandpipers which are often directly below had been pushed up to almost eye level, providing unusually good photo-opportunities. They were rather more successful at dodging the spray than I. I headed up to the more sheltered Church Ope Cove to dry off and look for Wall Lizards - more on them in a later post - and was treated to my first photographable butterfly of the year: a Peacock which basked briefly on a warm rock.
On the subject of butterflies, the return to gainful employment mentioned above starts very shortly in the form of probably my dream job at Butterfly Conservation, the UK charity dedicated to saving butterflies and moths, which is based here in Dorset. If you're not a member already, you obviously should be: they do great work for our hard-pressed Lepidoptera. And now there is the extra incentive that by joining you will be keeping me too busy to clutter up the internet with so-so photos :-). Speaking of which, here are a few more chats to end with - and why not! 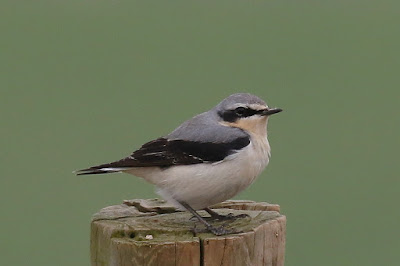 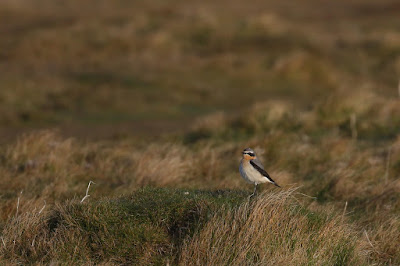 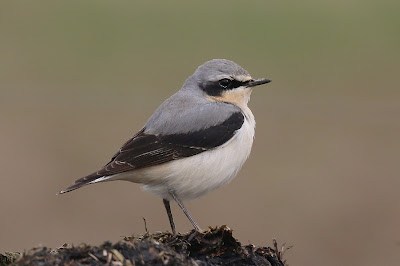 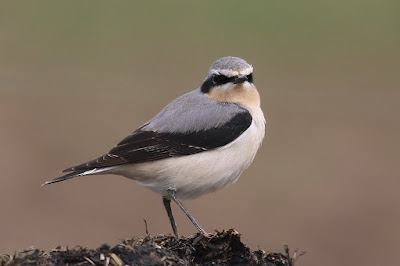 A look back at the beast

In the excitement of blogging about patch Hawfinches, I almost forgot to recount everything else I saw during the cold snap in the Swineham/Wareham area a couple of weekends ago. In truth, there was nothing spectacular, but plenty of common or scarce species were turning up in unusual locations, some surprisingly easy to see as the harsh conditions forced them into gardens or otherwise into the open in the search for sustenance. The highlights were a Firecrest in my postage stamp of a town centre garden, and an icicle-clad Spoonbill on the main gravel pit at Swineham. Sadly, two of this last species were found dead in recent days in Dorset: one had presumably succumbed to the cold, the other, which had two broken legs, was thought possibly to have snapped them trying to free itself from ice. An illustration of the harsh impacts of the freeze which, judging by the death toll chronicled on social media, befell many individual birds over the course of a few days. And a reminder to put some food out for the garden birds if the coming weekend's forecast of snow materialises.
﻿﻿
Posted by Peter Moore at 22:57 3 comments:

The real beast from the east

It seems to take an extreme weather event to get me out to my local patch at Swineham these days, and with the combined impacts of Storm Emma and the 'Beast from the East' bringing unusual blizzard conditions to Dorset, I felt sure it would be worth a look on Saturday morning. The walk from home to the gravel pits takes me through the graveyard of Wareham St Mary Church, the gate to which was frozen stuck. To circumvent this I stepped over a short wall and flushed a chunky finch from beneath a Yew Tree - Hawfinch!
The Hawfinch invasion has been a remarkable event in British birding this winter with birds turning up across the country following a failure of the seed crop on the continent, particularly in eastern Europe where they would normally spend the winter. As the photos show, the Hawfinch has an out-sized head and bill: evolution's answer to a nut-cracker, it is said to be capable of exerting 50kg of force. That's what I call a beast from the east!
I let my fellow Swineham irregular Trevor know about the rare visitor to our manor and as we waited for the first Hawfinch to reappear, a distinctive call behind me betrayed the presence of a second. Trevor soon located it as it dropped to feed on the ground. The next challenge was to get a photograph - easier said than done with this very shy species, especially given the amount of people wandering past the graveyard.
I eventually managed some decent shots by standing on the road which runs alongside the graveyard, hiding behind a parked van and peering over a chest high wall to find the female feeding on the ground just yards in front of me. This odd behaviour (mine, not the Hawfinch's) attracted the attention of several passers by so the bird was soon disturbed by their innocent enquiries about what I was doing.
This morning I went for the subtle approach, staking out a quiet corner of the graveyard and later lying sniper-style beside a low wall with a good view of one of the feeding areas. It's a good job the gravediggers weren't on duty, I think I might have ended up buried alive. Not that it did me much good, the 'over the wall' shots were still the best of the lot.