It's that time of year again

It's that time of year again: the Dorset Youth League Football Season is underway. Eldest son George is now Wareham Rangers' under-14s utility right-back/midfield/whatever-the-team-commands-guy, on account of us having no subs due to transfer window defections and drop-outs. Another change this season has been the move to a far more parent-friendly regime of weeknight training, freeing up Saturday mornings, and earlier kick-offs on match days, freeing up Sunday afternoons. The start of the football season coincides, of course, with the autumn bird migration season, so I have been enjoying these new-found weekend freedoms by checking out some favourite hotspots around Dorset. Some highlights from a joyous middle-age reclaimed below:﻿
Posted by Peter Moore at 21:42 No comments:

A night out in Plymouth

The 400th species of bird I saw in Britain was Lesser Grey Shrike, one of which spent some time around Middlebere in Dorset in 2008, not long after I moved here, but long before I had a decent camera. Reports of another of this species in neighbouring Devon saw me head down after work on Friday night in the hope of improving on my digiscoped efforts from eight years ago. 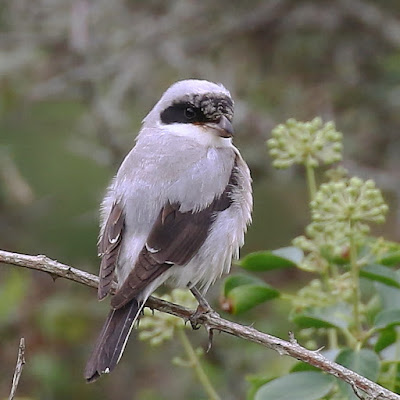 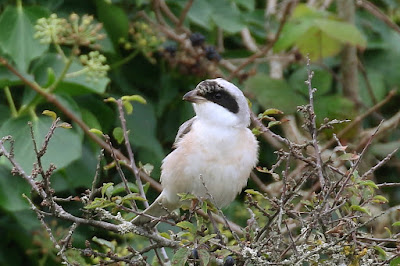 There had been no news on the bird after 1230 on Friday so I wasn't sure it would still be there, but talking to several birders who were on site when I arrived, it emerged that it had been seen shortly before, and I caught up with it shortly after. I had left it a bit late though, and despite enjoying a close but obscured view as it sat in an Elder, and extended views of it feeding distantly before it went to roost at about 1840, the hope of a decent photograph remained unfulfilled. I put the news out, and, feeling a little disappointed, and none too keen on the idea of a long drive, phoned home and was granted permission to stay over in Plymouth so I could have another look for the Shrike in the morning. I found a reasonably priced B&B via the miracle of the internet, though was slightly disconcerted to find a wedding disco taking place under my bedroom window when I arrived. 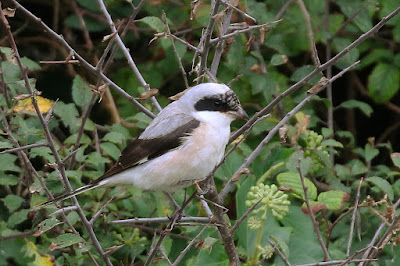 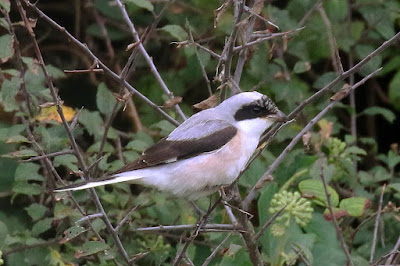 The DJ was pure Ray Von, and plans of an early night were put on hold as he lurched from The Kooks She Moves in Her Own Way (no problem with that) to Grease Lighting (more problematic) via a stompy disco version of Take Me Home Country Roads (a plutonium-grade problem). Eventually the ear-torturing Abba sing-alongs died down and I entered the land of nod. I was back on the coast path at 0700 this morning and just under an hour later the Shrike emerged from where I had seen it go to roost. 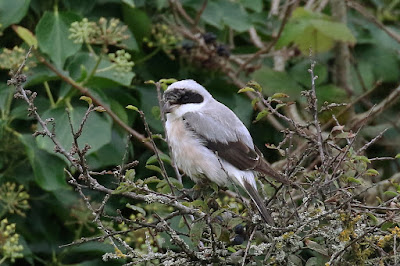 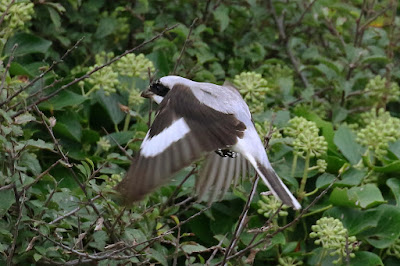 After a distant showing, the Shrike flew closer but then did a most un-shrike like thing and failed to perch up as expected on a prominent tree. It continued not to do so for the best part of the next three hours, by which point I convinced myself it had done a bunk and started heading for the car, now regretting my decision to stay over. Newly arriving birders appeared to know different though and persuaded me to turn back as the group I had just left were indicating that the bird was back on view. 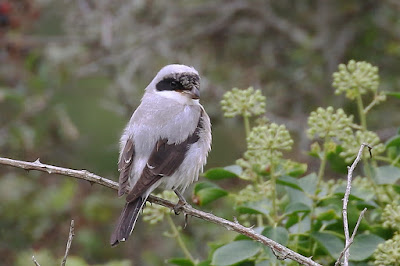 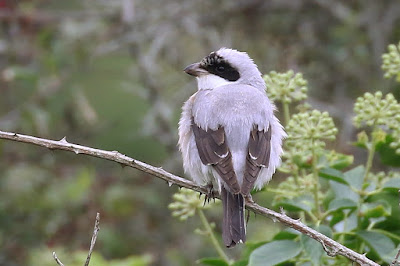 I returned to find the Shrike perched up at close range for an extended period - here the pinkish underparts and black forecrown of an adult bird were visible. The black mask shape reminded me of a Penduline Tit more than a typical Shrike. Viewing was restricted to a small area so having got some half-decent photographs and concluded it was unlikely to come closer, I retreated to let others squeeze in to the confined space - at which point the Shrike flew even closer with the petrol blue sea off Jennycliff Beach as a backdrop! As you can see from these links, Steve Carey and James Packer, among others, were able to get some attractive photographs in this position. Still, I was happy with my efforts - a distinct improvement on those fuzzy digiscoped images of the Dorset bird. 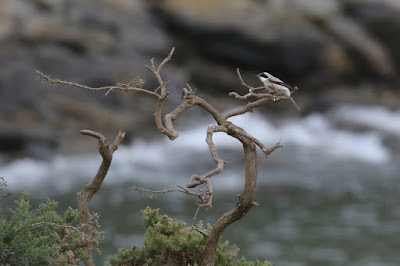 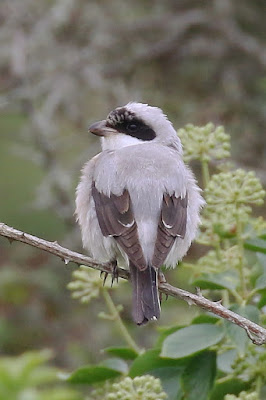 Brownsea through a variety of lenses

Both my sons have been showing an interest in photography lately so I've been digging out old camera bodies and lenses in the hope of encouraging them. I am thinking that if I can get them hooked now, I will have someone to drive me round in my old age while I sit in the back barking directions. The novelty of having their own cameras helped persuade them that a day trip to Brownsea yesterday would be a good idea, as opposed to their normal Saturday morning routine of slaying elf-lizards on Skyrim. 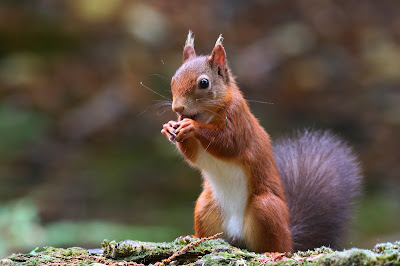 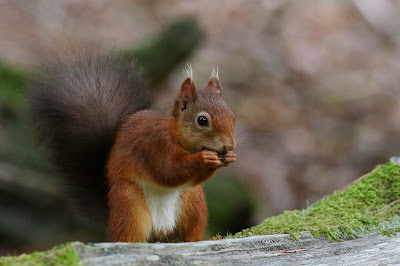 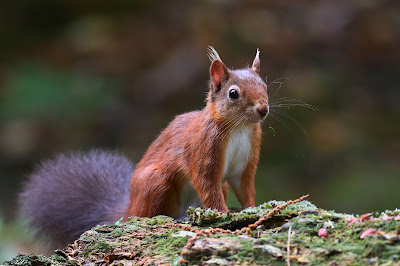 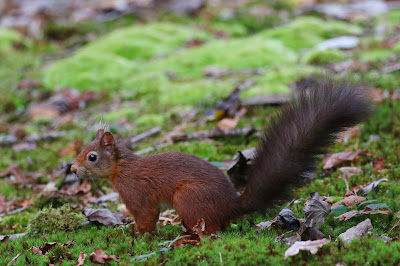 Taking the slightly complex but more scenic route from Wareham around the south side of Poole Harbour, over on the Studland ferry as foot passengers and to Brownsea via the famous yellow boat from Sandbanks, we got the first one of the morning and were in the hides overlooking the lagoon shortly before 1030. Large numbers of waders were present, the most numerous being Oystercathcer, Black-tailed Godwit and Avocet, flocks of which are building up for the winter.
Much scarcer among the waders were a few each of Ruff and Curlew Sandpiper, both of which eventually came in close to the hides having initially been viewable only distantly through the telescope. A dozen Spotted Redshank were also hanging out with the Redshank flock.
In truth, despite my efforts to tool them up with half-decent camera gear, the boys didn't take many photos of birds - they spent most of the time at opposite ends of the generously appointed hides photographing each other, or spraying imaginary bullets around using the camera's high speed burst mode to simulate semi-automatic assault rifles. Charming. But they did seem to appreciate the compelling nature of wildlife photography eventually when a tame Red Squirrel allowed a close approach near the Villa. A kindly soul had left a few nuts out and it kept returning to eat a few and bury the rest.
Posted by Peter Moore at 22:17 No comments:

Autumn on the patch

﻿﻿I've been making a bit more of an effort to catch up with autumn migrants on my local patch at Swineham over the past few weeks. My visits in recent years have often been necessarily fleeting, involving a brisk canter around the gravel pits trying to cover as much of the area as possible. This autumn I have tried a different strategy, lingering in a few of the more promising looking spots for passerines, and not worrying about trying to cover all the ground. It's worked quite well, and I've started to appreciate the old place a bit more as a result. But a late evening walk tonight was bright, breezy and almost completely birdless, so I had reverted to type and was doing a circuit of the gravel pits when, heading west up the Piddle Valley, something made me look back: Great White Egret in a ditch - patch tick! It looked like it had clocked me before I clocked it, made a few short flights and settled to feed in amongst a herd of cows. A few pictures of the Egret and some other recent migrants below.