Blogging appears a bit passé these days, what with Twitter and the like offering more instant gratification and immediate feedback for and from today's time-poor social media user. So passé, in fact, that I needn't feel remotely guilty about posting almost pre-historic news from a family holiday in Yorkshire earlier this month. Today the wonderful Bempton Cliffs RSPB reserve is playing host to two Greenish Warblers - one of a small number of species I have seen in Britain but not yet photographed. A couple of weeks ago there were no Greenish Warblers - but there were signs of early migration with a juvenile Cuckoo providing me with my best opportunity this lifetime to photograph a normally skittish species. Wheatears, Whitethroats and Wagtails were also in evidence in the fields behind the clifftops.
Bempton is world renowned for its Gannet colony - thousands were still on the cliffs, providing, in my humble opinion, about the best natural spectacle one can see in mainland Britain today. I now know I am not alone in holding this opinion - to quote another visitor overheard behind me at one of the many well-positioned viewpoints: 'That's, like, the most amazing nature I have ever seen. You know, with my actual eyes'. Quite.
I had not been to Bempton at this time of year previously, so it was an opportunity to study Gannet chicks and fledglings at close quarters and in a variety of stages of advancement towards making their first flight. Some still looked like the plush toys in the RSPB shop, others were similar in proportion to the adults but their flecked grey-brown plumage was in complete contrast to the black, white and cream colours of the parent birds.
Over 11,000 pairs of Gannet breed at Bempton, and at such a high density disputes between neighbours are inevitable - we winced as we watched young birds take quite a battering if they strayed into the wrong territory.
The auks - Puffins, Guillemots and Razorbills - which are also a feature of Bempton in the summer had left their breeding ledges before our arrival in Yorkshire. But it wasn't just Gannets to admire - Kittiwakes were also still present in good numbers, and the Tree Sparrow flock around the visitor centre also appeared to be in good health.

Our recent family holiday to Yorkshire wasn't really a birding trip but I did manage a few excursions with the bins and camera. My eldest son surprised me by showing an interest in going to see the Hornsea Mere Little Gull roost at which over 8,000 birds had been reported on some evenings, so we headed there as dusk approached. Unfortunately on our chosen night, the Little Gulls chose to go somewhere else - just 200 or so were present but that's still the largest flock of Little Gull I have ever seen. A very friendly and knowledgeable local birder explained that it wasn't actually a roost but a feeding frenzy with the Little Gull taking advantage of millions of flying insects which emerge over the Mere.

He also suggested that it might be worth visiting the Mere in the morning as Little Gulls hang out on the jetties near the sailing club, giving much closer views than we were getting in the evening. I followed his advice and enjoyed excellent views of a flock of 25 in a variety of plumages. Unfortunately the light was unkind - I really needed to be out on the end of a jetty parallel to the one being used as a roost by the gulls. I asked a sailing club official if it would be OK to wander out there and he said it was fine as long as I wore a life-jacket. That seemed like a fair deal to get even better views and photos! 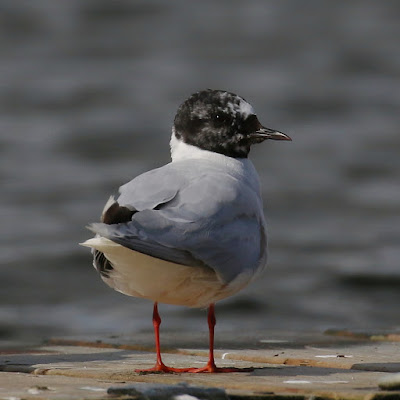 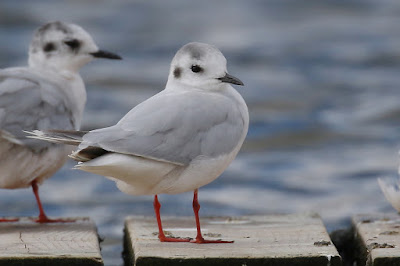 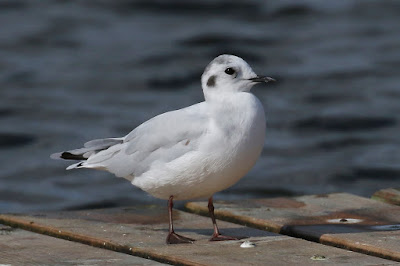 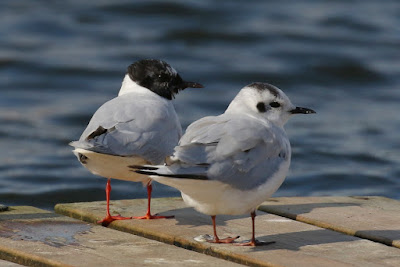 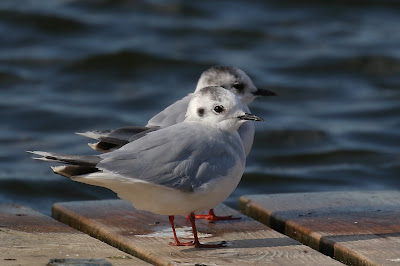 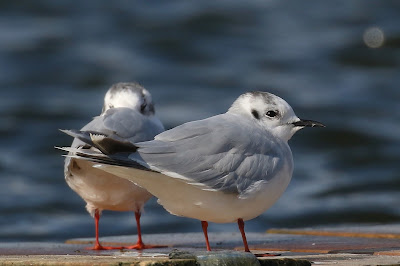 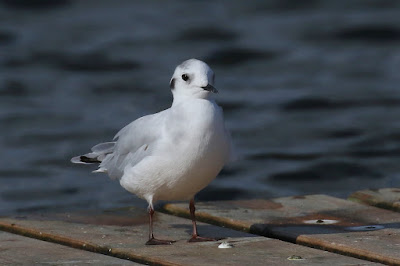 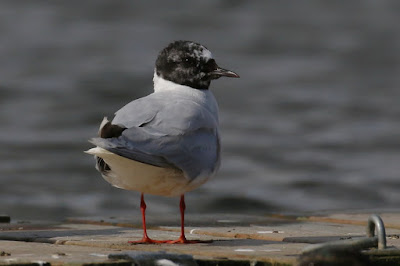 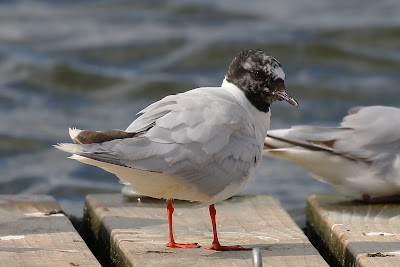 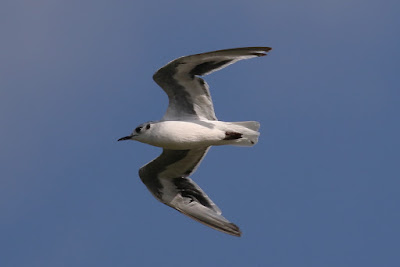 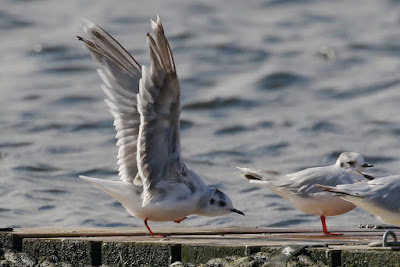 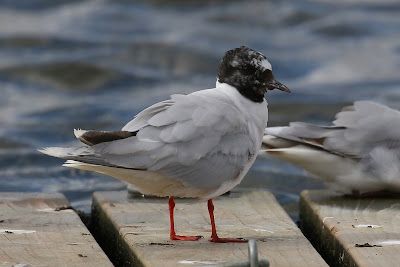 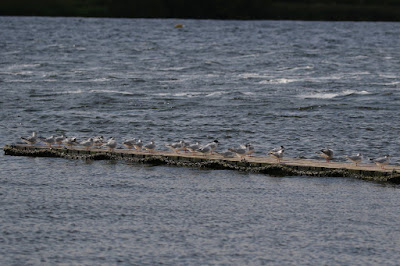 Yesterday's Yellow Warbler was considerate enough to wait until my family holiday in Yorkshire was over before appearing in Dorset - we got back on Saturday after an enjoyable week in God's Own County. While birding wasn't really the main objective of the trip north so much as enjoying the varied landscapes and loafing on sofas and cinema seats to indulge our shared family passion for Marvel and DC Comics movies, a few opportunities to enjoy the birdlife of the area were inevitably worked into the itinerary. A couple of trips to the seabird colony at Bempton were among them (more on those later), and there was even time to shoehorn in a mini-twitch when a Rose-Coloured Starling was conveniently discovered in a Scarborough garden when we were just a few miles away. My ever tolerant family agreed to wait in the car while I squeezed into the small suburban front yard to which the homeowner had kindly allowed birders access so they could view the Starling at the rear of the property. After a short wait and it gave a couple of extended views - the smartest adult I think I have seen of this species in Britain. Pictures and a few other highlights of the trip north below.
On the subject of colourful birds, a two mile detour off the M1 on our way north was all it took to catch up with the East Midlands celebrated flock of Bee-eaters, which, following an unsuccessful breeding attempt in neighbouring Notts, had skipped across the border to Leicestershire to further extended their stay. A shame they weren't able to produce any young successfully, though with another continental European visitor associated with warmer climes, the Black-winged Stilt, making a good fist of colonising the UK this year, it seems likely there will be further attempts by the Bee-eater to do so.

Well that was unexpected

While I was travelling home from Portland at dusk this evening, the radio football commentator John Murray said of the weather in Manchester that it felt more like October than August. I know what he meant having just seen an American passerine at Culverwell - the sort of thing that you might expect in the second half of October but not so much in the second half of August. Then again Yellow Warbler is an earlier migrant compared to other warblers, and with one arriving earlier in the day in Ireland on the back of Hurricane Gert, perhaps something special was to be expected in Britain. 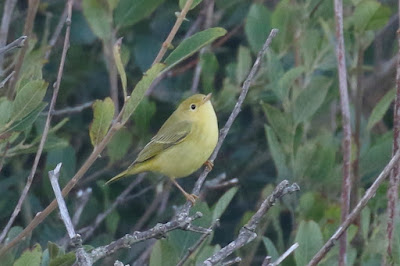 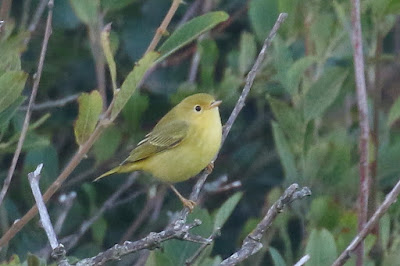 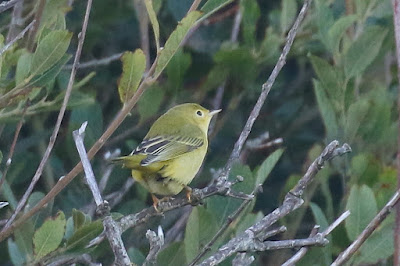 A moderately frantic dash after work was required to see this extreme rarity. The choice facing me on arrival was park at the Bill and run back up the hill or leave the car in Southwell and canter down. I figured the latter would be marginally more dignified and efficient, but only the tops of the trees at Culverwell were catching the sun as I wheezed my way to the end of a line of assembled birders. Fortunately Dave Gibbs, last seen on our Gull of Kintyre twitch, was there to point out the warbler almost immediately and the fading light then seemed to spur it on to a vigorous bout of fly-catching and calling. With thanks to Jol and Steve for alerting me to its presence, and to Marcus for the lift to spare my aching hips the walk back to Southwell. These are the best of several photographs snatched as dusk approached. More may follow when I have calmed down a bit.
Posted by Peter Moore at 22:50 2 comments: