On the wing at Cerne Abbas

A profusion of butterflies were on the wing around the Cerne Abbas giant today - the star attraction being the Duke of Burgundy fritillary (which is, the lepidopterists will tell you, a metalmark rather than a fritillary). Also present were Brown Argus (which is a blue, not a brown), Marsh Fritillary (which is a fritillary, but was on chalk downland, not marsh), Green Hairstreak (which was green but a tatty specimen which didn't have much of a hairstreak), Common Blue (which wasn't that common), Grizzled Skipper, Dingy Skipper, Small Heath, Small Blue and Adonis Blue (which did what they said on the tin, except the Grizzled, which didn't). With one or two unidentified species of White that made 11 or 12 in total. Conditions were perfect for photographing them - bright sunlight to get them flying about followed by patchy cloud to get them settled and take the harshness out of the light. A selection of the best shots below.

Or 'Isle of May' as they say in Fife. After a successful twitch of the Greater Yellowlegs last Saturday, Sunday was earmarked for more chilled out birding on the Isle of May. Late on Saturday, however, a Thrush Nightingale, three Bluethroats and a Red-backed Shrike were reported on the Island. I have heard but not seen Thrush Nightingale in Dorset so a potential tick was on the cards.

The tides meant less time than normal on the island - only 2 hours - and after the warden's welcome speech that was down to 1 hour 50 minutes. He was actually very helpful, telling me where all the rarities had been seen, but in the time available I was unable to find any of them. There were migrants around, however, including several Redstarts, a single Black Redstart, Chiffchaffs and a Whitethroat - all easily seen in the absence of cover. One Bluethroat was seen by one lucky photographer in the mouth of a Heligoland trap - but not by me unfortunately.


At this time of year on such a warm day half of the Puffins were in burrows and the other half generally out at sea, but it was a good opportunity to practice some flight photography as they whirred to and from the island. Breeding Eider, Fulmar, Kittiwake, Guillemot and Razorbill were also present in good numbers.
﻿ ﻿﻿﻿﻿﻿﻿﻿
The boat cruised slowly under the auk-covered cliffs before the journey back, which was punctuated by a steady stream of Gannets commuting to and from nearby Bass Rock.
﻿﻿﻿﻿﻿ ﻿﻿﻿﻿﻿

Has it got the legs?

Yellowlegs, that is. My uber-dip of 2011 was undoubtedly the Greater Yellowlegs in Northumberland which ruined a perfectly good twitch by not showing for me. A few days off and a hire car last weekend provided an opportunity to catch up with it again as it had been present every day for about 3 months at the Loch of Strathbeg in Aberdeenshire. I wouldn't twitch that far in a weekend let alone a day, but a mini-break with a day on the Isle of May and a return journey via the grouse moors of County Durham provided the padding for what would otherwise have been a ridiculously long way to go for a single bird. My brother put me up in Stirling for a few nights, which gave me a chance to see my nephew on his 5th birthday, adding the veneer of a respectable family visit to the enterprise.

Arriving on Friday and with family civilities dispensed with, I set off north from Stirling early on Saturday morning. Perth, Dundee, Aberdeen and Peterhead came and went, and just when I thought I was going to fall off the map I reached Strathbeg. With no one around I set up the scope full of hope but careful scanning produced nothing. Just as I was contemplating a nervous breakdown another birder turned up who had seen the Yellowlegs the previous day and was able to point me roughly in the right direction.

I had been looking too close, but on scanning the more distant Tower Pool we saw the bird almost immediately, it's legs aglow despite the great distance. A 700m walk to the Tower Pool hide produced a slightly less appalling view, but from here I was able to compare it with a Greenshank with which it was associating - apart from the obvious difference in leg colour it looked a shade bigger, paler and more speckled. I even heard it call and was treated to a fly-around which revealed the square white rump.


A sense of relief was accompanied by a burst of adrenalin which kept me going as I watched a stunning adult Little Gull, its 1st summer companion and a healthy flock of Tree Sparrows near the visitor centre.

A couple of hours later, as I wandered up the Ythan Estuary searching for the semi-resident King Eider (unsuccessfully as it turned out), my body and brain slumped in unison and one crumpled, exhausted twitcher retired to the car for a lie down. Unfortunately the car was one of those tiny Peugeots which could not be laid down in, so I had to settle for a power nap before heading back to Stirling.

With Golden Orioles and Woodchats on Portland, a Great Reed Warbler in Weymouth and Black-winged Stilts all over the place there was a touch of the Mediterranean about the Dorset coast this week. My first stop on the way home after finishing work in Charmouth this evening was Radipole Lake, where the Great Reed Warbler was singing for its 3rd day. This showed quite well but was difficult to photograph with the distance and heat haze. There was just time to catch up with one of the Stilts at nearby Lodmoor before heading home.

I was on the way back from Scotland to Dorset when I heard about the Cream-coloured Courser on a golf course in Herefordshire. From the M6 it would take an extra 2 hours to get there and another 2 back. Assuming an hour to find and photograph the bird, this would delay my ETA home by 5 hours from about 7 to about 12. Past bedtime for my boys, before which I promised I would try to get home. To prove I'm not a total deadbeat Dad, temptation was resisted. Had I not seen the long-staying bird on the Isles of Scilly (pictured), however, I suspect I would have been a very bad Dad indeed. We see this bird every year now on our annual holiday to St Mary's where it can be found in the Museum, mounted rather unceremoniously on a stick, like a dishevelled, off-White Chocolate Magnum. They should start a fund for a taxidermist to restore it to something closer to its former glory. Worth a quid from everyone who saw it, surely?

Grouse in the mist


Stayed near Newcastle last night to enable a cross-country drive across the grouse moors of County Durham on the way home from Scotland, and before hitting the M6 for the long drive home. The mist had other ideas, however, and while I could hear Red Grouse all around I actually had to get out of the car and walk 20 yards on to the moor to flush one to see it! Eventually it thinned out to allow some good views of Grouse and Golden Plover from the car.

...said a partially scrambled pager message with reference to a Squacco Heron at Blagdon Lake. Returning from Gloucestershire to Dorset on Sunday took me conveniently close to Blagdon. 'Permit only', as it turned out, but with limited time, I went straight there in the hope of getting one on site. Those scrambled pager messages always remind me of Ceefax, which in turn reminds me of my favourite ever Ceefax headline: 'Gay bishop splits vicars'. 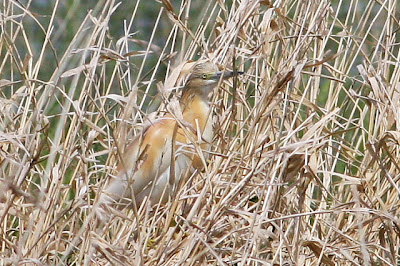 Anyway, a guy leaving the permit only area told me that I should be able to get one inside so I took a chance and fortunately there was a local birder in the car park dispensing them. Earlier on someone from the water company had apparently been turfing out people with no permit, which begs the question why they didn't just sell them one to make a few quid in these cash-strapped times? Perhaps being a lightly regulated monopoly with a guaranteed rate of return has something to do with it...Anyway, for £3 it was good value and the Squacco showed well. 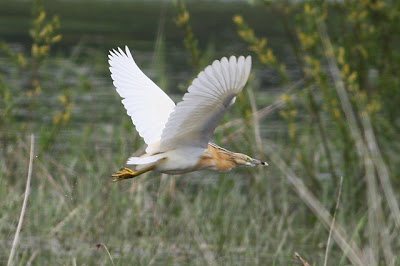 Preening in the reeds at first, it eventually made it's way in to the open before flying further up the lake. There it came quite close to the road, though always obscured by the lush vegetation in which it was feeding, stuffing its face with Kermit's relatives, no doubt. A very smart bird. 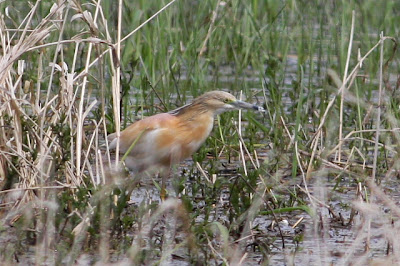 For future reference, anyone wishing to access the permit only parts of Blagdon and nearby Chew can obtain a permit from Picnic Site 1 at Chew Valley Lake. 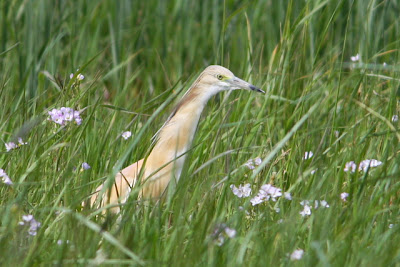