Get thee to a Nunnery

So said Hamlet to Ophelia, and if Ophelia wants to see a Black-bellied Dipper, it's still good advice. The Nunnery in question is in Thetford, home of the British Trust for Ornithology, and the bird has spent the winter nearby, next to Three Nuns' Bridges, off Nuns' Bridges Road, in case you hadn't got the nun-based influences on the area. I was guessing that one of the BTO staffers stumbled across the bird in their lunch hour and so it seems.

After an early start from Dorset I was on site just after 0800.The Dipper took a little while to locate but the telltale sign of a man in camouflage gear lying in mud on the river bank gave it away.


Another dozen or so photographers then appeared from downstream - good to see a friendly face in the form of James Lowen among them - I thought they might be following the second Black-bellied Dipper which turned up at the same site recently, but it soon became clear they were in pursuit of the local Otters.


I joined them as a very compliant Otter swam around at close range and climbed out of the water amongst slightly less compliant vegetation. The light was still pretty poor so James and I returned to the Dipper to comfort it with the now familiar sound of whirring motordrives. It gave a few bursts of song in return, so clearly a male. After a couple more hours I had managed a variety of shots in degrees of light and shade, and used up all my memory cards, so decided to call it a day.
So the wildlife performed, but what about the camera? This is not the place, and I'm not the man, for a full technical review, so let's just say I was very pleased with the results - sharp, good colour rendition in the circumstances, and capable of a very fast burst of 8 frames per second. It's also reasonably idiot proof, a bonus for the idiots among us.

I took a few test shots with the 40D just to convince myself I hadn't wasted my money on the upgrade, and they were reassuringly trashy. I shan't be pensioning it off yet though - as well as a treasured item, it'll make a pretty good spare body when I get the shutter button fixed.

The 7D was a bit grainier at higher ISO ratings than I was hoping for, but these were pretty extreme conditions, and I think my expectations were probably unrealistically high. I suspect I'll still be grateful at some point for the maximum ISO rating of 6400 compared to 1600 on my 40D. Any more criticisms? At this stage, I have to say Nun. See what I did there?
﻿

Coming, ready or not

Hundreds of migrant birds seemed to decide yesterday that enough was enough, and, whether the weather in Britain was ready or not, they were coming anyway. After yet another week marred by illness, today I resolved to join them.
On Saturday, Dorset's migration hotspots of Portland Bill, Hengistbury Head and, er, the drain behind PC World in Poole, were apparently buzzing with Chiffchaffs and Wheatears. Star of the show though was a White-spotted Bluethroat at Portland Bill, so I headed there first thing this morning.
Portland this morning was as it should be: heaving with Wheatears. But after couple of hours standing around by the Obs quarry, where the Bluethroat had been the previous night, these and a Black Redstart were about all I had seen. A walk to the Top Fields produced a few Ring Ouzel and another came in off the sea as I headed back down to the Bill.
As I reached the car and was thinking of heading off, the pager reported that the Bluethroat was back, and after an undignified trot on my part and a short wait, it revealed itself in the quarry. It stayed hunkered down as a bloke with a strimmer, oblivious to the telescopes and lenses trained on him, stripped the vegetation from just above its head. Almost a red-spotted Bluethroat.
The strimming man eventually got camera shy and packed up, allowing the Bluethroat to return to feed on the path in full view. It was a tonic to be back out with my lens freshly back from the menders. Unfortunately, it turned out that the lens was fine, and it was the camera shutter button that was faulty all along. A shutter release cable circumvented the problem in the short-term, and an impulse purchase of a new Canon 7D online last night will do so in the medium-term.
I made the mistake of discussing this purchase with several photographers present today, who told me what a crap camera it was, or that I'd paid too much, you know, just the stuff you want to hear when you've just sold a child to purchase consumer electronics...﻿﻿﻿
This was a Dorset tick for me and quite a few others present by the sound of it, and I headed home full of the joys of spring. Not even dipping on a Kentish Plover at Ferrybridge on the way back could wipe the smile off. 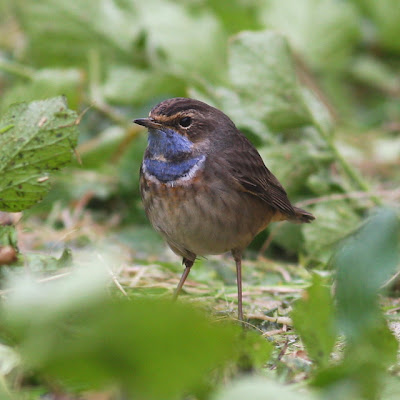 Birding moments have been not so much stolen recently as callously ripped from the cold dead hand of opportunity. This weekend, Saturday was a sporty day for my eldest son George. It started with a 6-a-side football tournament at the local sports centre. Being indoors with access to fancy coffee, and with games of only 8 minutes duration, this seemed like an improvement at first on the usual weekend routine of standing on a windy touchline for an hour watching the ritual humiliation of Wareham Rangers under-10s.
But when it got to 'played 3, lost 3' I realised there was something to be said for only watching him get beat once in a weekend. Pride was restored with a hard-fought 1-0 win in the final group match, but it wasn't enough to prevent an early exit from the tournament. On the up-side, this meant there was just enough time to visit my local patch before his afternoon swimming gala kicked off.
I was convinced this fleeting visit to Swineham, my first in a couple of weeks, would be rewarded handsomely with exotic birds, but it wasn't to be. A reminder that a patch needs to be wooed, and won't give up the goodies in exchange for a fleeting booty call. A Yellow-legged Gull and a Peregrine were the highlights.


Another football match was due on Sunday, but George's mum pulled rank for Mother's Day, and informed a heart-broken Ranger's coach that as George was 'unavailable for selection' he'd have to find another bum to warm the subs bench. Her choice of day out - a chilly stroll on Studland Beach - provided a bonus encounter with the local Med Gulls, which outnumbered their Black-headed cousins by two to one.
As well as limited opportunity, I've also been suffering a bit with a lack of motivation to be honest. Being able to sling a throw-around 400mm lens over my shoulder usually means that I go out with high hopes of taking a decent picture if not seeing a decent bird, but with this lens at the menders even that hope is reduced. The alternatives involve attaching cameras and adaptors to tubes and telescopes to create a selection of Heath Robinson-esque contraptions. All to get sub-standard pictures like these.
A visit to the camera shop today to check on progress revealed that Canon haven't even priced the repair job yet, let alone fixed the thing. A cunning ruse to force me to buy another one of their products while I wait, no doubt. Well screw you, Canon, I can wait. Aforementioned wife and son will happily confirm I have the patience of a saint. Come back next week, then, Dear Reader, for more fuzzy pictures and, if you're really lucky, continued moaning about my busted lens and busy life.

Expect to see this message popping up on pagers and mobiles over the next few weeks. How do I know? I've just put my 400mm lens in for repair, that's how. Last time I did this I had point blank views of Lapland Buntings, Sabine's Gulls and Grey Phalaropes, but no decent gear to take pictures with. There's no good time to take your favourite lens out of action, unless you are fortunate enough to have a stash of top of the range spares in the cupboard (which I'm not. A 12 year old 200-400mm Tamron zoom which focuses slower than a Sloth with cataracts doesn't count.). So for now, here's the last few photos taken with the f5.6 before it went off to Canon, taken while pootling around Wareham.