On the wing in Wareham

The family went to Legoland yesterday so I was obviously gutted I was to miss out on queueing in sweltering heat at a theme park. They weren't going to get home until late so the freedom to enjoy the fine weather with a walk around the local patch after work provided some consolation. Flying insects were the dominant feature - the evening started well with a Demoiselle at Bestwall - beautiful, but not a Beautiful, if you know what I mean - a Banded in fact.


Meadow Browns were around in good numbers, as were Red Admirals and, as dusk approached, a large number of Green-veined Whites roosted in the hedgerow at the end of Swineham gravel pits.


Unfortunately most of the flying insects seemed intent on eating me so I beat a retreat before dark and came across a Barn Owl, roosting in a hedge but given away by mobbing passerines.


There were a few other birds around as well - small numbers of Reed, Willow and Cetti's Warblers were expected, but a couple of Bearded Tits were a bonus. The biggest treat, however, was simply being able to go for a walk without a coat and wellies.

...that's right, it's a flame, an Olympic one no less, which came through Wareham this afternoon. Not before the official sponsors though. First ('Gold' sponsorship, no doubt) came Coca Cola, to remind us of the close relationship between elite sport and fizzy drinks. Silver went to Samsung, for where would the Olympic spirit be without consumer electronics. Lloyds TSB plumped for Bronze, not wanting to appear flash and hoping that the feelgood factor would rub off on us so much that we would forget how they and their kind almost bankrupted the entire state. Good luck with that, guys.
﻿﻿ ﻿﻿My kids seemed under-whelmed with this convoy, perhaps remembering the motorcade which preceded Le Tour de France when it came through our village in Kent a few years ago. This was bigger, faster, and, as it passed, threw keyrings, hats and other dangerously sharp bits of tat in their little faces at high velocity, which they thought was cool. I told them they should be grateful that the sponsors didn't throw Coke tins, tellies and IOUs off the backs of the lorries today.
Then a bus turned up and a lady got off with the torch: a rare and moving sight for everyone, particularly those old enough to remember the 1948 London Olympics - the last time anyone had seen a bus in rural Dorset (ba-dum ching!). Men on stilts with whistles whipped up the crowd, and thrifty townsfolk waved their recycled Diamond Jubilee Union Jacks. A nice change from the pitchforks we usually wave at anything down from London.

The torch, to my dismay, appeared to have gone out, but no one except me seemed bothered. The bearer hung around outside the Co-op and it eventually became clear that she was waiting for a lit torch to arrive. I naively thought that 'the Torch relay' meant there was only one which got passed around but apparently there are loads, and the upstanding folk whose good works and civic deeds have earned them the honour of being a Torchbearer get to keep their one. A nice touch amid the corporate cant. In fact, if you ignored the whole sponsorship lark, and concentrated on the flame and what it stands for - purity, the pursuit of perfection, peace and friendship - even a cynic like me could appreciate it coming to town.

After all the excitement, there was nothing for it but a walk around Swineham Gravel Pits this evening to calm down. Luckily, there was absolutely nothing there to get my pulse racing, a Marsh Harrier being about the only thing preventing me from describing it as utterly birdless.

As I write I am in the doghouse for not joining the rest of the family on Wareham Quay for post-Torch bouncy-castles, live music, and beer-swilling 'fun'. No, I'm at home watching British medal hopes on TV doing athletics, which I love, at Crystal Palace. So how come it's me that's 'not getting into the spirit of the Games'?
﻿ ﻿
Posted by Peter Moore at 00:12 No comments: 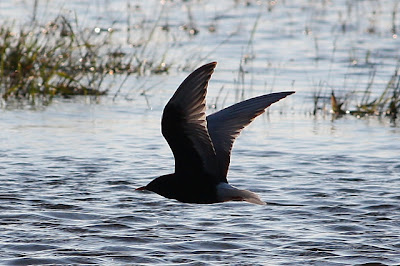 Gull-billed and Caspian Tern have paid such fleeting visits to Dorset in recent weeks that I didn't even get the chance to go looking for them. So it was very decent of their White-winged Black cousin to hang around in Weymouth today long enough for me to watch Andy Murray get beaten at Wimbledon on TV and make my way there after. 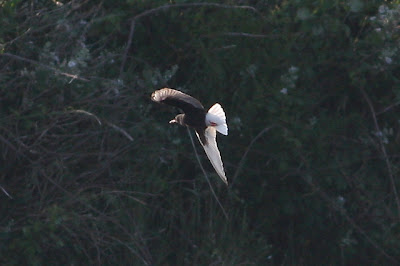 I'd heard that the Weymouth reserves had been hit hard by flooding but was still unprepared for the extent of the water present at Lodmoor. The tern islands had flooded, causing havoc for the breeding colony, but at least some of the chicks had by tonight made it to the safety of some rafts, and the weather had improved markedly. The White-winged Black Tern landed briefly on a raft but was given short shrift by the Commons, who can be forgiven for not being very accommodating after their recent trauma. 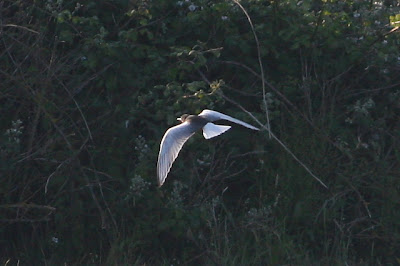 Following a recent recount, it turns out that the Paddyfield Warbler (below) I saw in Sussex earlier in the year was the 400th species of bird I've photographed in Britain. My British list is 428 so there are quite a few that I have seen but not photographed. Most, but not all, of the 400 are on my website, and only shame prevents me from uploading those that aren't.
﻿﻿﻿﻿
﻿﻿﻿Which raises an interesting question - when is a photo tick not a photo tick? The normal rule for seeing a bird - 'if you can't ID it, you can't tick it' - could be applied. But there are one or two among the 400 which I have seen perfectly well enough to identify, but of which I only have a crap photo. As a statement of fact, rather than aesthetic judgement, I have photos of them whether I like it or not, even if its a blurry dot. Take my recent Greater Yellowsmudge pictures (below). It was the Greater Yellowlegs (it called, flew around to reveal a square white rump and stood next to a Greenshank for size comparison), but could you rule out Lesser (or, indeed, bumfluff on the lens) on the strength of this photo?

Or should the rule be, if a stranger could identify it, then that's OK? But then which stranger? And how competent would they have to be? Take this Goshawk (below). 'Pigeon', my mum would say. But I bet Goshwak worshippers could tell what it is. The best birders could probably identify some of my blurry dots which I couldn't if I was the stranger being shown the same photo. So what does that make me? [Ed: a bit too neurotic perhaps?] Ok, ok, perhaps I'm over-analysing it. It's my list. I make the rules. And right now it's a whopping 400.