We interrupt this ruthlessly chronological series of posts catching up on my non-motorised year listing escapades to bring actual news i.e. less than 72 hours old. As the long May Day Bank Holiday weekend approached my ambition was increasing with my stamina, and I resolved to make the long bike ride to Portland on the Saturday. 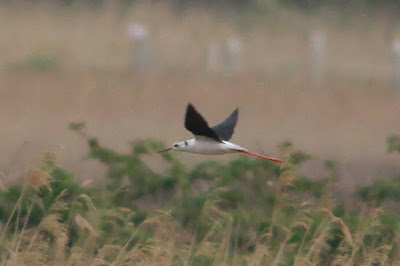 Then news broke around Friday lunchtime of a pair of Black-winged Stilts at Lodmoor. This would be an excellent addition to the year list but the question was, should I wait until the next day and hope they were still there so I could see them en route to Portland? Or go after work and be more certain of success? It had been a tiring week - how much Zoom can a man take? - and I wasn't planning on ending it with a 35 mile bike ride but, equally, with the lighter evenings I calculated I ought to be able to make it there and back before dark. It was a pair of Black-winged Stilts, after all, so I resolved to make the effort.

With mind made up, a goal to aim for and all the steep hills being downhill on the way there, I made good time, leaving home at 1715 and arriving shortly after 1830 - slow by pro-cycling standards obviously, but quick by mine, and I almost triggered the 'lower your speed' sign on the way down into Weymouth. 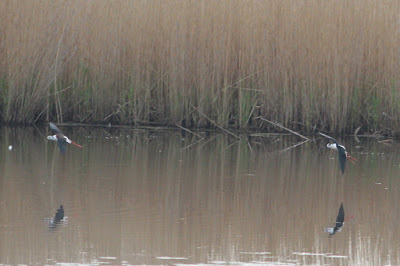 On arrival at the north end of Lodmoor I almost cycled past the small group of familiar faces watching the bird, so well camouflaged were they, but their massive lenses gave them away and they kindly pointed out the Stilts and proudly showed me their Stilt-porn photos of the copulating pair. I didn't witness any such funny business but the Stilts did a tour of the pools and gave pretty good, if distant, views. I snatched some record shots and headed off, conscious of the long way home and the slow puncture I noticed on the way down, but didn't have time to stop for, and which had thus far held its own.

The sprint down to Lodmoor had made me a bit peckish, and being an elite athlete now, I was mindful of the need to treat my body with respect. So as I began the long climb out of Weymouth, supper at the excellent Preston chippy seemed the obvious choice. Duly fortified with grease, I headed up with gusto until indigestion enforced a steadier pace. 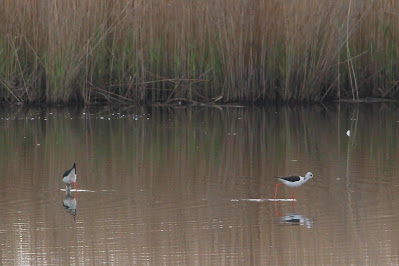 With the pressure off, I could enjoy the little things on the ride home, like the newish stretch of tarmac east of Osmington Mills - smooth as a baby's bum, it was like a personal gift from Dorset Council to my own posterior and the bike positively purred along. Even when it came to an abrupt end with a pothole in Poxwell the occupants of a roadside Rookery cheered me on. And the sunset over Tadnoll and Winfrith Heath -  part of Egdon Heath in Thomas Hardy's novels - was redolent of one of his works, or would have been but for the field of Alpacas and caravans against the backdrop of the decommissioned nuclear reactor, none of which I guess were around in his day. As dusk fell I eschewed the main road from Wool to Wareham for the safer and more southerly scenic route along National Cycle Route 2. Mist was forming at waist height in the Frome Valley and a Skylark sang into the last of the light.

As the refreshing effects of chip fat wore off, I hit 'the wall' and progress slowed still further. Then the slow puncture became a fast one when I was two miles from home. I had forgotten to bring my little tube of nitrous oxide for rapid tyre reflation which is probably for the best as I would have been tempted to inhale it rather than use it on the bike. And it was too late and too dark to bother changing the inner tube so after pumping it up a couple of times, diminishing returns eventually kicked in and I pushed the bike for the last half a mile. But although I had limped home, the gamble had paid off: the Stilts were gone the next morning, and I could add another top drawer species to the list of birds seen travelling under my own steam.

At the start of 2021, I calculated that I could get to 170 by the end of the year. The Stilts brought the list to this number by the end of April, so it seems I had underestimated both the potential and myself in terms of how far I would be willing to go to add to the total.