I've been sleeping well lately thanks to a Christmas gift of a set of Bose earbuds, which play a variety of white noises to drown out traffic, snoring and other nocturnal disturbances. A little too well it appears as on Thursday they caused me to miss a couple of early morning phone calls from friends alerting me to the presence of a Melodious Warbler just down the road at Middlebere. 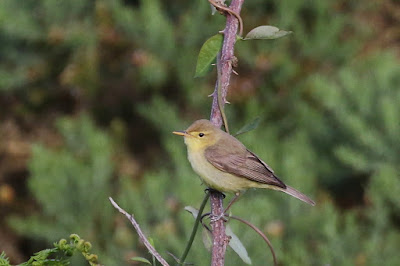 Fortunately my wife was up and about to hear the landline and shake me awake in plenty of time to dash there, grab a few photos and get back before starting work. My heart was pounding when I arrived, a result of tanking it to Middlebere on the bike before being fully awake I think, and while I'm pretty sure I did the 4 mile journey in record time, I can't prove it as I left in such a rush that I didn't even grab my GPS milometer on the way out of the door. 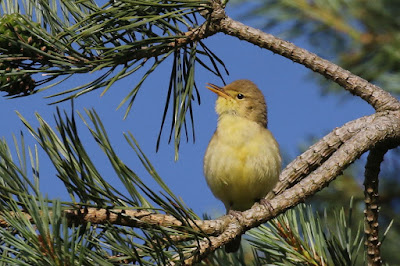 Remarkably, the Melodious Warbler was singing like a bird possessed - even more remarkable when it emerged that it had been there for over a week before being reported and identified. I returned on Thursday evening to find that the bird had gone to ground, apparently as a result of someone rather unwisely playing a sound recording of Melodious Warbler right below one of its favoured song-posts. It did eventually reappear but was much more elusive than it had been in the morning. 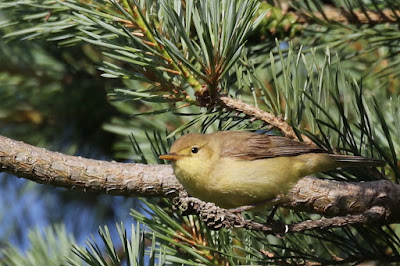 Third time lucky tonight then, when I trundled back to Middlebere in pleasant evening light, and the Warbler sat out beautifully and continued to sing like a crazy man on meths. If the song of Icterine Warbler is based on mimicry, I would say the song of Melodious Warbler is based more on paraphrase - at times it sounded a bit like a Tree Pipit, a Sedge Warbler, a Dartford Warbler and a Goldfinch - but never exactly like any of them. A lovely composition to hear in the Dorset countryside anyway, and the first time I have heard one giving the full repertoire. Plus an excellent addition to the non-motorised year list in an otherwise quiet June, bringing the total for 2021 to a chunky 192. 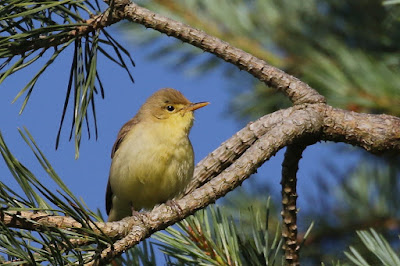 The shine was only taken off the evening by discovering that the camera, recently the subject of an expensive repair job, seems to be failing to produce the previous sharp image, so apologies if these pictures look a bit over-sharpened - the only way to rescue them from the digital graveyard! 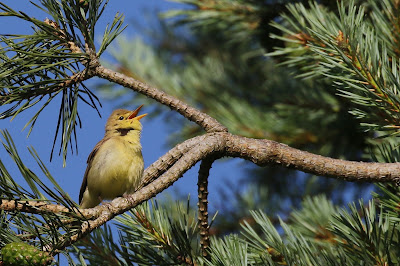