When I moved to Dorset in 2007 there was a friendly rivalry between the regular birders at Swineham, including myself, and those at Lytchett Bay, which is a few miles clockwise around Poole Harbour. Both sites had turned up some good species over the years, but both also had a reputation as being a bit 'hard work', not necessarily rewarding assiduous patch watchers as they might. 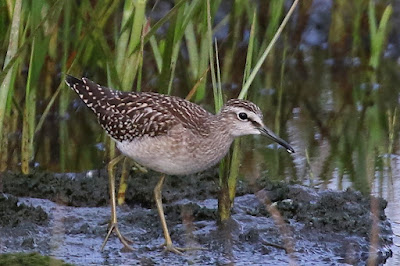 Some years back, a breach in the sea wall at Lytchett changed all that, allowing the area now known as Lytchett Fields to flood on every tide, driving a transition to saltmarsh and the muddy habitats beloved of wading birds. As a result, it has developed a justified reputation as *swallows hard* one of the best wetland sites in Dorset. 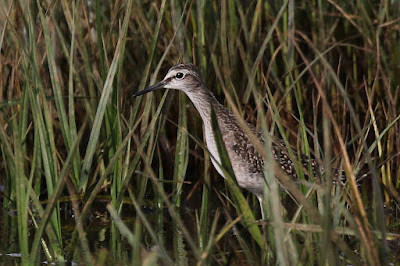 At the same time, unsympathetic management prevailed at Swineham such that it became very much the poor relation, certainly since 2012/13 when a very wet period brought an unusually good selection of waders to the flooded meadows near the gravel pits. Swineham enjoyed another brief renaissance last year following construction of two new scrapes, when regular lockdown visits by yours truly and others turned up a Temminck's Stint, Pec Sand (x2), Marsh Warbler and Grey Phalarope to give Lytchett a run for its money for once. 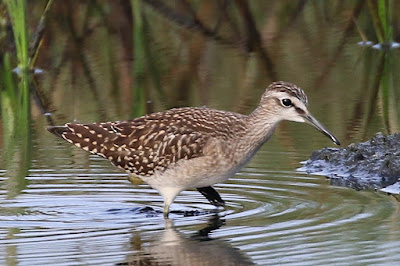 But the magnetic effect of the new scrapes seems to have worn off this year, and despite even more regular visits on my part, the site hasn't turned up anything rarer than a pair of relocating Ring-necked Duck at the back end of winter. 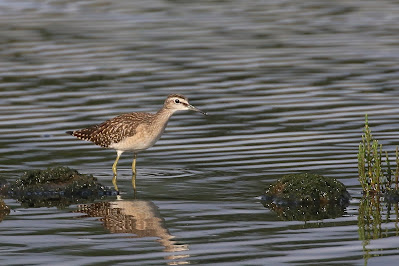 So with Swineham not delivering, and several waders still on my target list for the 2021 non-motorised year list, I guessed there would be a point this year where I would have to put petty rivalries aside and head for the Lytchett Fields of Dreams. The moment arrived sooner than expected on Tuesday night with news of a Wood Sandpiper at Lytchett and, rather than risk missing out on a potentially tricky species, I thought I had better strike while the iron was hot. 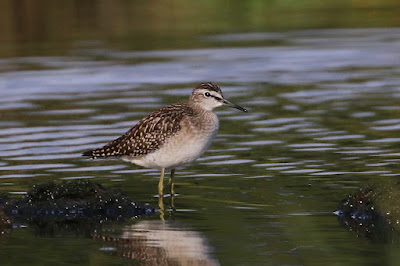 The route to Lytchett Fields by bike is now a well trodden one as I have to head past it en route to most points east. It's also pretty flat so I was pleased to find I could complete the 6 miles from home in under half an hour. Unfortunately, for the last five minutes of this half hour it positively shat down with rain and I was drenched by the time I arrived. 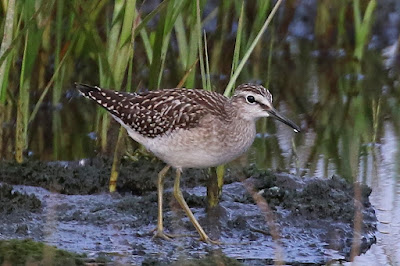 Mercifully the storm passed soon after I stopped, enabling me to set up the scope to scan the pools where the Wood Sand had been reported without too much fogging up of the optics. Before long I had located the attractive wader which eventually made its way from the back of the pool to the front. The sun had come out by this time improving the prospects for photography as well as drying my clothes out surprisingly quickly. 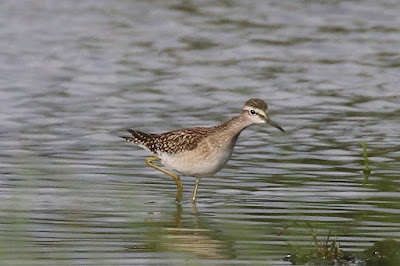 A Ruff, a Little Stint or a Curlew Sand would have been nice - all three would have taken the year list to 200 - but it wasn't to be and the Wood Sand brought it to 197. Still, autumn is young and there will be plenty of time to hopefully catch up with them, and I have a feeling I will be back at the Bay again before the year is up. 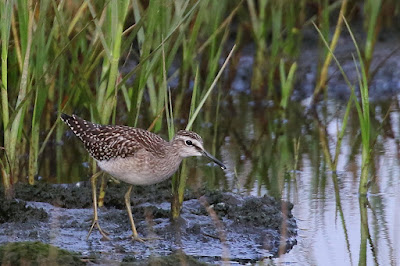