Visitors from north and south

After a poor September, the non-motorised year list got back on track in the first half of October, but the darker evenings were in danger of restricting birding opportunities pretty much to the weekends. I had hoped to finish work a bit early on Friday and the case for doing so became compelling when reports materialised of a very confiding Snow Bunting, a bird of high alpine habitats in summer which migrates to lower altitudes in winter, at Durlston Country Park. 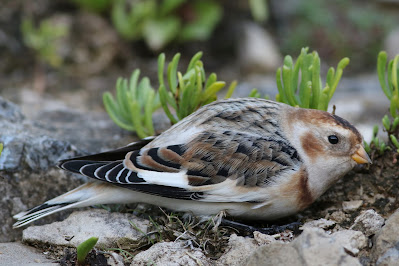 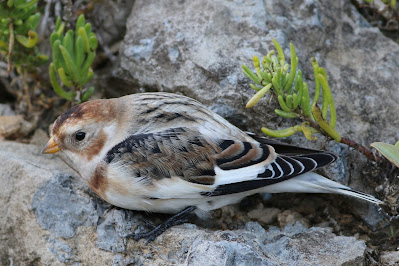 What was presumably the same bird had been found almost a week previously on Saturday 16th by former Butterfly Conservation Chief Executive and Purbeck resident Martin Warren. Martin had posted a phone camera shot suggesting that the bird was pretty approachable. I was on Portland that day but as I had to take my son to Swanage on the Sunday to meet friends, I decided to go in search of the Bunting as it was just a mile up the road to where it had been seen. Others had done the same but none of us were able to re-locate it. 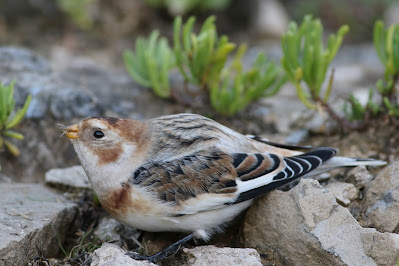 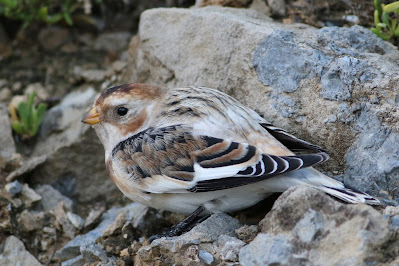 Durlston has a special place in my affections as, as well as being a spectacular location, I used to have it under my professional wing when I looked after the Country Parks portfolio for Dorset County Council. Despite the absence of the Snow Bunting, it was good to see one of the local Peregrines dismantling a pigeon on the cliff face. 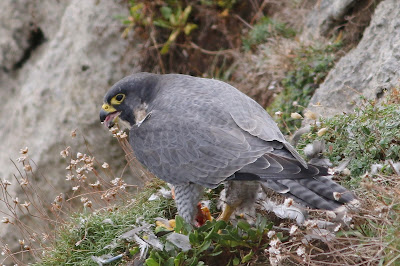 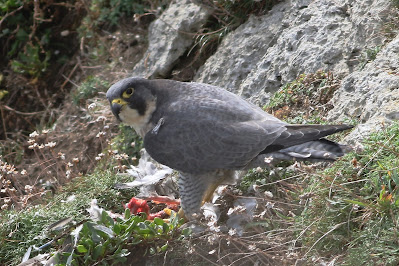 Fast forward to Friday and I was in a race against the sunset to complete the 11 mile journey to Durlston on the bike. For the first time this year I managed to make it up the punishing hill out of Swanage without getting off to push, and soon after was bouncing over the speed ramps at the park entrance. Local birder James had advised me that the bird was right at seaward end of the famous gully below the lighthouse but as I headed down the road to the lighthouse I could see another local birder, Garry Hayman, wandering forlornly up the gully, suggesting that the bird may have gone awol. 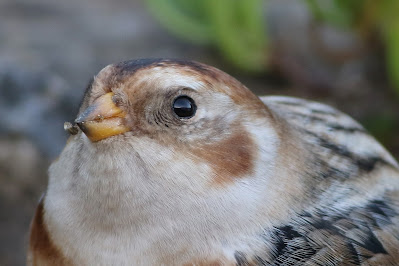 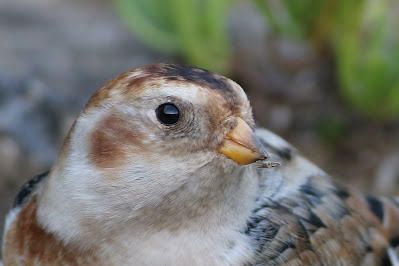 I had forwarded James's news to Garry earlier but there is no signal in the gully so he hadn't received it. I gestured to him to head back down and we met on a small ledge on the seaward side of path which looked a likely spot. Garry went one way and I went the other but there was no sign. Just as I was recalling James's advice to study the ground closely as the bird was almost underfoot when he saw it, a movement almost underfoot caught my eye - it was the Snow Bunting. It shuffled just a couple of yards and we spent the next 30 minutes enjoying amazing views of it feeding and preening. We were joined by Steve Smith and visiting Kent birder Andy Millar and the bird remained unconcerned even though the 'crowd' had doubled! 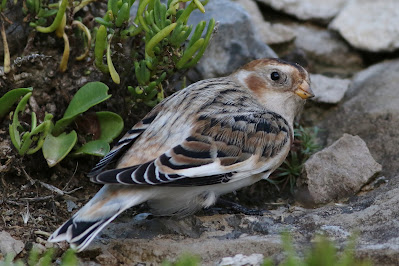 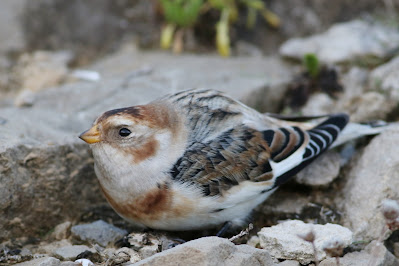 Returning home in the dark I felt I had earned a lie in on Saturday, but by lunchtime I was getting itchy feet again and news of a Caspian Gull and a Common Rosefinch at Portland Bill were all I needed to get back in the saddle. Joe Stockwell advised that the Gull seemed relatively settled which is unusual for this species in Dorset, and gave me an added incentive to crack on. After the exertions of Friday night though I was making slow progress and a strengthening headwind wasn't helping. Then, 11 miles into the 27 mile journey to Portland, a spoke broke on my rear wheel causing me to contemplate the wisdom of pressing on. 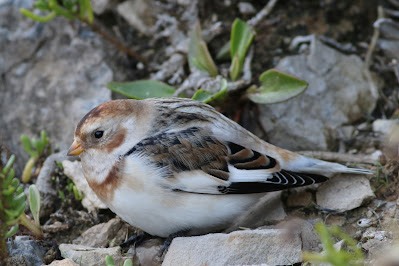 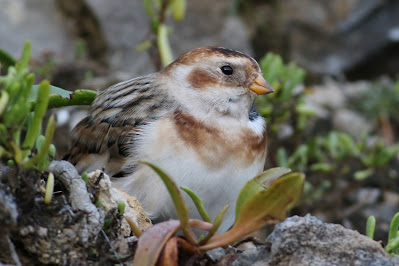 I taped up the spoke but before I could decide whether to stick or twist, my mind was made up by news of a Hoopoe, a widespread species in southern and eastern Europe, at Lytchett Bay, about 17 miles back in the other direction! The other problem was that the news hadn't been totally confirmed at this point and there was always the possibility of mistaken identity with a Jay, especially as the bird had been reported on a peri-urban allotment. I phoned Lytchett's own Shaun Robson who had just arrived on site but he hadn't seen the bird so couldn't be sure himself, though he said the report came from a reliable source. This was enough to make up my mind to head back east. 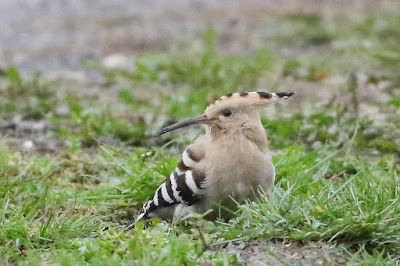 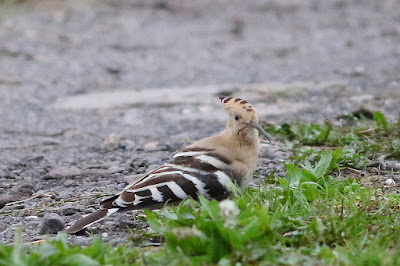 Cycling with a broken spoke wasn't ideal but I had to get home somehow and with a following wind I was soon back in Wareham and transferring gear from one bike to another. As I was doing so Shaun phoned to say he had just seen the Hoopoe, provoking a record-breaking sub-30 minute sprint to Lytchett on my part. Screeching to a halt in the allotment car park in my hi-vis cycling jacket I was hailed by the olive-clad glitterati of Poole Harbour's birding community and complemented on my 'camo' gear. But this was no time for banter as there was a Hoopoe to see, and I was ushered to the front of the group to finally set eyes on it. 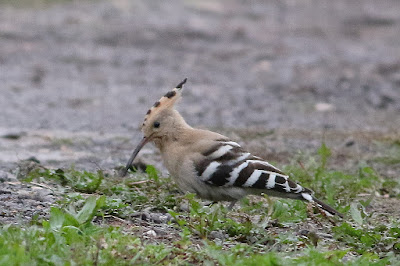 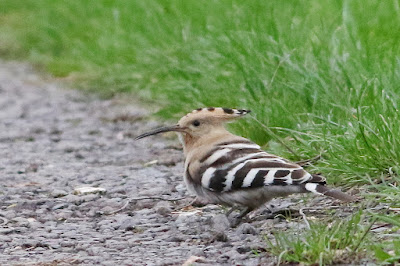 There was a great buzz in the small crowd and I was pretty buzzed myself that the gamble to turn around had paid off, and for such a special bird too. After a few pictures I had a look around the surrounding  fields for a Water Pipit which would have brought the year list to 210 but without success. Still, it had been a brilliant weekend with two charismatic additions to both the year list and my growing non-motorised life list, which now stands at 234. 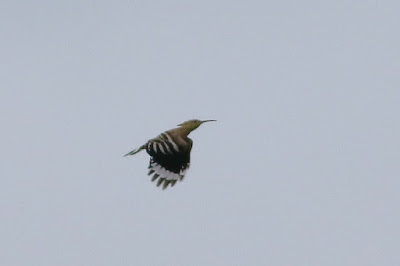 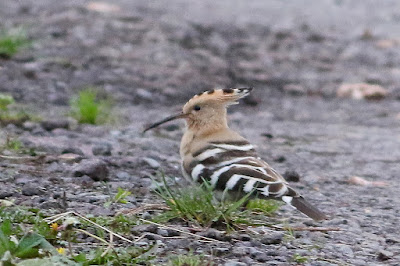