Call of the Arctic... 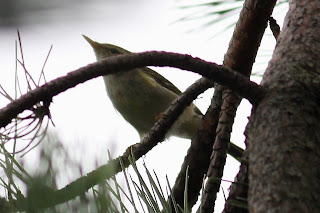 Arrived at Holme in Norfolk at 0700 courtesy of a lift from Paul Welling - cheers Paul - to search for the Arctic Warbler present for much of the week. Efficient as ever, Paul even had Arctic Warbler calls on tape in the car so we could do some revision before arriving on site. Not that listening for the dipper-esque call did us much good, as the bird stubbornly refused to call or show until after 09:00. Despite sub-optimal viewing conditions - the bird was often high and hidden in pines against the light - we eventually managed reasonable views though these were the best photographs I could 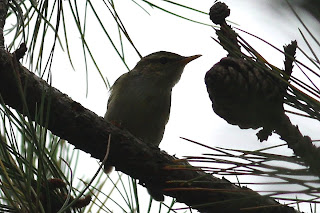 muster. Confused by the byzantine structure of Holme's complex of 'pay-per-view' nature reserves, we weren't quite sure whether the bird was on the NWT reserve (Judean People's Front?), NOA land (People's Front of Judea?) or even Natural England's (the Romans?) NNR. Although tempted by the nearby Red-Necked Phalarope, when that turned out to be on a splinter reserve we decided to head home in the hope of saving marriages and seeing our children before bedtime. A new bird for Britain for me.
Posted by Peter Moore at 03:00