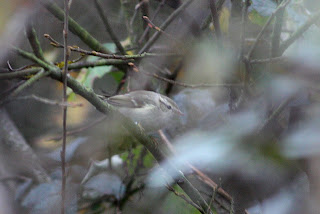 I saw the Hume's Yellow-browed Warbler at Littlesea on the Fleet shortly after its arrival a few weeks ago but was unable to photograph it at the time. A second attempt more recently ended in no sighting let alone no photos, but reports of it still present this morning tempted me back for a 3rd attempt. In three hours I heard six 'tsueet' calls, had three brief glimpses and snatched two pictures through the branches of the sallows - this the best of the two. Could have been worse though! A Blackcap and a few Bullfinches kept company with the Hume's, and 600 Brent Geese on the Fleet provided a noisy backdrop.
Posted by Peter Moore at 22:42